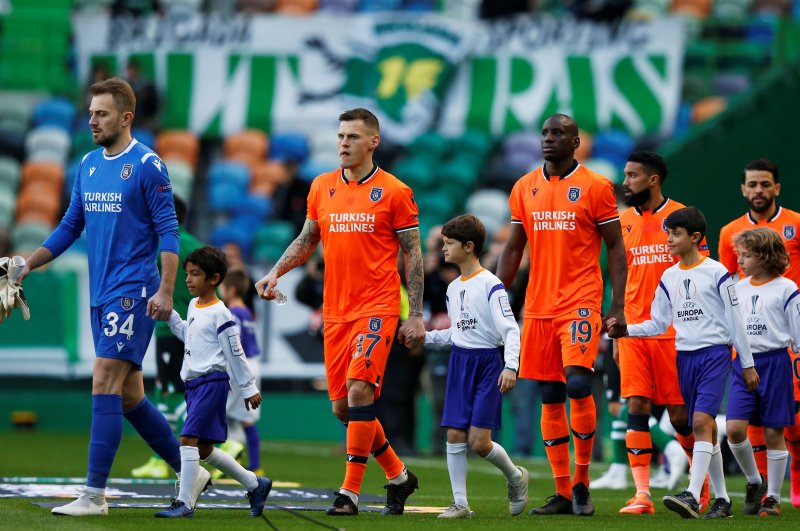 Istanbul Başakşehir enters the pitch prior to the Europa League round of 32 first-leg football match against Sporting CP at the Alvalade stadium in Lisbon, Thursday, Feb. 20, 2020. (Reuters Photo)
by Daily Sabah with AFP Feb 26, 2020 10:18 am

Istanbul Başakşehir is praying the home crowd will raise its spirits as it attempts to counter Sporting CP’s two-goal advantage in the second leg of the Europa League round of 32 on Thursday.

Edin Visca’s away goal in last week’s 3-1 loss means Başakşehir will have a fight on its hands in order to get to the next round.

The Istanbul club must make sure it keeps its own goal shut in the second leg. However, it has managed to keep a clean sheet only twice in the last 10 matches.

Başakşehir will play the match on the back of a last-minute 2-1 away win against Rizespor in Süper Lig. Manager Okan Buruk chose not to rotate his squad in the last game as the team is in a tight race for the league title. The win over Rizespor sent Başakşehir to the top of the table, boosting morale ahead of the Europa League clash.

Başakşehir’s top goal scorer Enzo Crivelli tops the list of the club’s absentees. He will miss the match due to accumulated yellow cards. His absence is especially unfortunate, considering Başakşehir’s struggle to produce chances in the first leg. The club clocked up three goal attempts, the first of which came only at the hour mark.

Başakşehir’s injured Fredrik Gulbrandsen and Mehmet Topal will be absent too. Meanwhile, Sporting’s Luis Neto is also suspended, while Jeremy Mathieu and Luiz Phellype are injured.

Meanwhile, in other Europa League fixtures, three English clubs and both Celtic and Rangers are hoping to secure places in the final 16, while former European Cup winners Ajax and Inter Milan are bidding to qualify against various odds.

Ole Gunnar Solskjaer's Manchester United holds the upper hand following last week's 1-1 draw in Belgium, but all is not lost for the visitors, given the problems goalscorer Emmanuel Dennis repeatedly created for United's defense.

United's latest financial results revealed revenues fell by almost 12% in the six months leading up to December, underlining the club's need for a return to Champions League football next season.

The arrival of Bruno Fernandes could provide just the spark required. The Portugal international scored his first United goal in a 3-0 win over Watford on the weekend. He also impressed in a brief cameo in the first leg.

After an unforgettable run-up to the Champions League semifinals last year, Ajax is in serious danger of making a limp exit from Europe this season as it welcomes Getafe to Amsterdam trailing 2-0 from the first leg.

Only five members of the team that began last season's second-leg loss to Tottenham Hotspur in the Champions League were on the field for the defeat in the Madrid suburbs last week. One of these, midfielder Hakim Ziyech, has already agreed to a Chelsea transfer.

Also beaten in the Dutch league by Heracles at the weekend, Erik ten Hag's team is in the process of being broken up, and overturning such a deficit against a Getafe side currently sitting fifth in La Liga is a big ask.

In any case, the match may not even be the priority this week for Ajax, as it faces AZ Alkmaar in a top-of-the-table clash in the Eredivisie on Sunday.

A precious away goal by the Colombian Luis Diaz kept alive Porto's hopes of progressing to the final 16 as it lost 2-1 to Bayer Leverkusen in Germany in the first leg last week.

The Portuguese side has otherwise been in good form recently and will be hopeful of turning the tie around back at the Estadio do Dragao, especially as the Bundesliga outfit has lost top scorer Kevin Volland to an ankle injury which could rule him out for the rest of the season.

The tie marks a meeting of two former winners of the competition – Leverkusen won it in 1988, while Porto lifted the trophy under Jose Mourinho in 2003 and again under Andre Villas-Boas in 2011. Both sides started the season in the Champions League, but Porto went out to Krasnodar in the third qualifying round and Leverkusen finished behind Juventus and Atletico Madrid in a difficult group.

The rising panic over coronavirus is overshadowing Inter's simple-looking second-leg clash with Ludogorets, who has little chance at the San Siro following its 2-0 defeat in Razgrad, as Italy grapples with an outbreak that has left 10 dead and over 300 people infected.

The chaos caused to the country's sporting calendar has hit Inter hard, with the weekend's postponed Serie A match against Sampdoria set to be played at the end of the season and Thursday's meeting to be played in front of empty stands.

The lack of home support will be another problem for Antonio Conte's side, as it tries to bounce back from a defeat at Lazio 10 days ago that has left it six points off the pace at home.

Conte still has to deal with the absence of goalkeeper Samir Handanovic, out since the start of the month with a little finger fracture.

The Gunners started the year languishing 12th in the Premier League, 11 points from the top four. But Arsenal now sits just four points adrift of fifth-placed Manchester United, with a top-five finish potentially enough to qualify for the Champions League after Manchester City was handed a two-year ban by UEFA for financial fair-play breaches.

A 1-0 victory over Olympiakos in Greece has also put last season's Europa League runner-up in pole position to reach the last 16 as it bids for a first European trophy since lifting the Cup Winners' Cup in 1994.