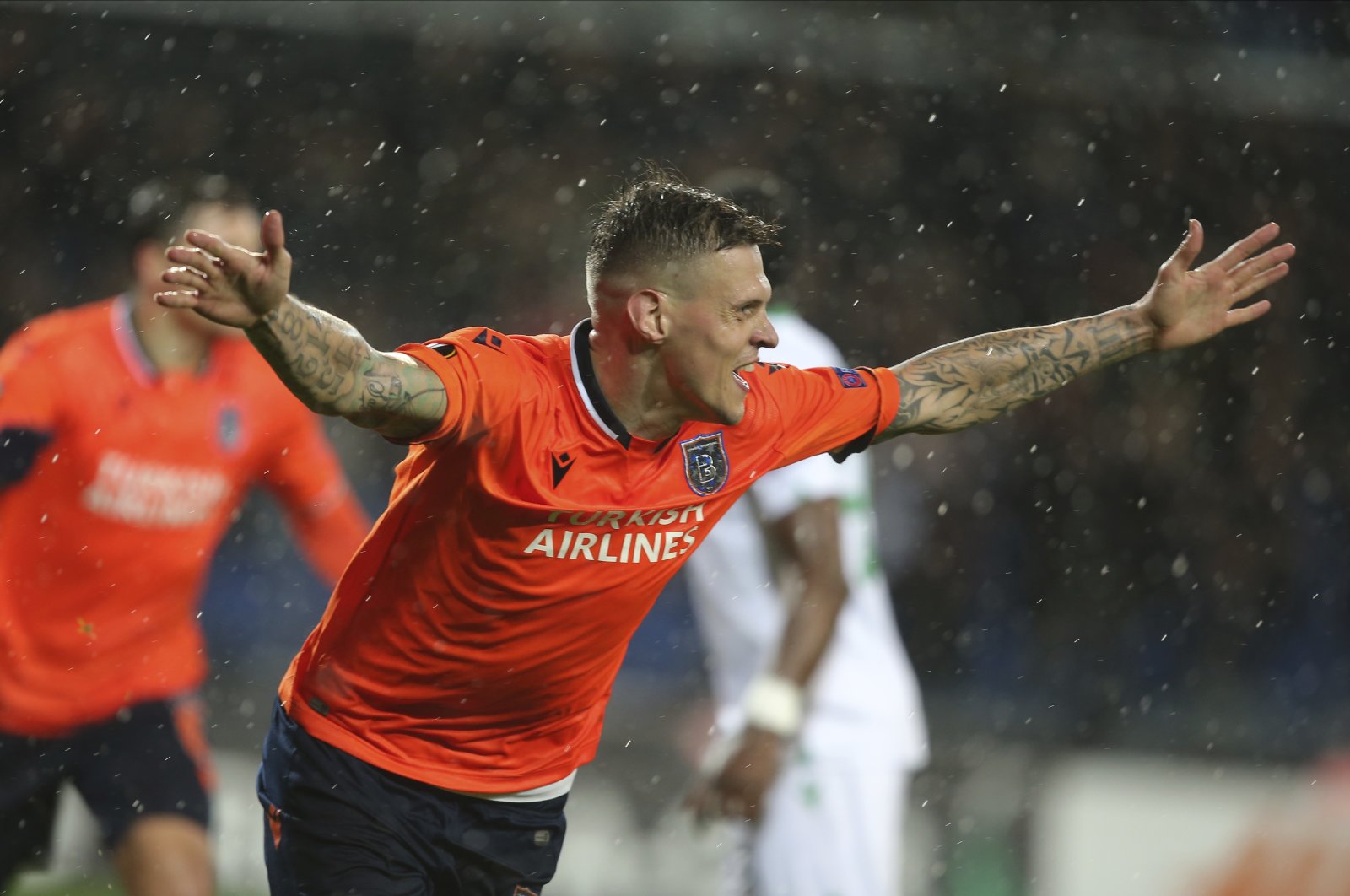 Istanbul Başakşehir traveled to Germany on Monday to face RB Leipzig as the Süper Lig champion embarks on its first Champions League quest.

The Istanbul side previously came close to competing in the elite tournament but lost all of its chances after getting knocked out in qualifiers.

Now, competing in the group stages for the first time, Başakşehir got more than it asked for; it was drawn against some mighty competition.

While no single match is ever easy in the Champions League, it will be a herculean challenge for Başakşehir as it was placed in what is named a “Group of Death,” which includes last year’s runner-up Paris Saint-Germain and Manchester United, in addition to Leipzig.

To make things worse for coach Okan Buruk, Başakşehir has been suffering from a poor form despite capping the last season with a title and accolades.

Starting the new Süper Lig with back-to-back defeats, Başakşehir managed to score its first goal and secure its first win five weeks in. Başakşehir earned its first win of the season on Saturday after defeating Trabzonspor, its rival for last year's title, 2-0 in what could be a turning point for Buruk and his men.

Now, coach Okan Buruk has the daunting task of finding a way to conquer what seems to be an impenetrable fortress, Leipzig.

Making it as far as to quarterfinals last year, the Bundesliga leaders haven’t lost a match so far and scored 10 goals in four games.

Speaking to reporters before departing for Germany, Buruk appeared to be aware of the difficulty waiting for him.

“We will be playing against an excellent team. Analyzing our opponent, what we see is a very dynamic team built with top-notch players. It is the Bundesliga leader right now. It seems a very difficult match lies ahead of us. We will try to do our best and reflect our game plan to the pitch,” Buruk said.

Buruk said that while his side has many players with a fighter’s spirit, they still lack experience.

“What we can promise is, we will do our best. Of course, sometimes the result is not what you want, but the important thing is to give it all you’ve got,” he said.

Buruk’s ace up his sleeve for the match will be Demba Ba, who will prove invaluable with his experience in the competition even if he failed to score in his last six appearances in the tournament.

For Leipzig, Hee-Chan Hwang will be the player to watch, who scored three goals and assisted three others during last year’s tournament.

Despite rising numbers of the coronavirus across Germany, the local health authority in Leipzig has granted permission for up to 999 spectators at the Red Bull Arena, down from the usual number of 8,500 fans allowed for home Bundesliga games.

German champion Bayern Munich, however, was ordered to host Atletico Madrid behind closed doors on Wednesday at the Allianz Arena as daily infection rates in Munich exceeded safety threshold.

In the other match of the group, PSG will start its latest bid for European success as it hosts Manchester United.

With Thomas Tuchel complaining that his squad is weaker than it was last season after the French club had already seen several key players depart over the summer, PSG started the new campaign hamstrung by injuries, suspensions and coronavirus infections.

Right-back Thomas Meunier and all-time record goal-scorer Edinson Cavani left when their contracts ended, not even sticking around for the latter stages of the Champions League in August – Cavani is now at United and so could come back to haunt his old side this week.

Skipper Thiago Silva did stay for the "Final Eight" in Lisbon but has since joined Chelsea and complained that sporting director Leonardo had been "clumsy and rushed" in refusing to offer him a deal to stay.

While there were departures, PSG saw several new signings arrive just before the transfer window closed on Oct. 5.

Italy striker Moise Kean was also captured on loan from Everton to strengthen the attack.

Neymar and Kylian Mbappe are still there, of course, and so is Angel di Maria, but they still look light in defense.

Meanwhile, in the short term, PSG is still missing a host of players for the start of their European campaign.

Influential left-back Juan Bernat is out with a knee injury, while midfield duo Marco Verratti and Leandro Paredes are expected to miss Tuesday's game, and Mauro Icardi is absent too.

Elsewhere in the night, Andrea Pirlo took his first managerial steps in the Champions League against Dynamo Kyiv, in a game which pits the fledgling Juventus coach against his vastly experienced former mentor Mircea Lucescu.

Lucescu, 75, and 41-year-old Pirlo have both taken over their respective clubs this season.

But while Italy footballing legend Pirlo never coached before stepping up at his former club, Lucescu has over four decades of experience throughout Europe.

Over his 40-year career, Lucescu has coached the Romanian and Turkish national teams as well as clubs in Romania, Italy, Ukraine, Russia and Turkey, including Istanbul powerhouses Galatasaray and Beşiktaş.

And it was the former Romanian international who gave a 16-year-old Pirlo his first Serie A start in the Italian's hometown club Brescia 25 years ago.

For Lucescu, who won six league titles as a player with Dinamo Bucharest in the 1960s and 1970s, seeing Pirlo on the opposition bench comes as no surprise.

"I was always convinced he would become a coach," said Lucescu.

Juve hopes Pirlo, who won a World Cup, two Champions Leagues and six Italian league titles as a player, can transmit his vision of the game.

But for Pirlo, his Juventus is "under construction, a young team which needs to gain experience."

A season-opening 3-0 win over Sampdoria was followed by draws at AS Roma (2-2) and promoted Crotone (1-1) with two red cards in as many games.

To complicate the task, Cristiano Ronaldo is quarantined because of the coronavirus and will miss the Kyiv trip and possibly the game against Barcelona in Turin.

More than two months after exiting the tournament with an 8-2 humiliation by Bayern Munich, Barcelona starts its latest campaign in recovery.

Eight players from the team that started the humiliating match in Lisbon remain, despite Pique saying nobody should be safe.

The club's president, Josep Maria Bartomeu, remains too, despite more than 16,000 members signing a petition to get rid of him.

Luis Suarez was pushed out, eventually to Atletico Madrid, and Ronald Koeman replaced Quique Setien as a coach in what were the most significant shifts in a supposedly revolutionary summer.

But Koeman was never going to be an appointment that instantly won over the players while Suarez's exit left Lionel Messi seething, another chance duly taken to criticize Bartomeu and the board.

"It's normal for a player to be a bit sad when a friend of his leaves after the years they had together, but it's part of football," said Koeman.

Messi said last season Barcelona was not good enough to win the Champions League, and he was proven right by the 8-2 humbling at the hands of Bayern laying bare the chasm in class between the soon-to-be-champion and a team that has only once gone past the quarterfinals since 2015.

And as Barca gets to go again, the worry will be that there is little to suggest the team is any better this time around.

The club’s biggest summer signing, Miralem Pjanic, was the result of an economic operation aimed at balancing the books, and whether he will be a significant upgrade on Arthur Melo, who went the other way to Juventus, is open to question.

Pedri, signed from Las Palmas in a deal agreed last year, has been one of the bright sparks in Barca's opening month, the attacking midfielder particularly impressive in the 1-0 defeat by Getafe on Saturday.

But he is 17 and like the 20-year-old Francisco Trincao, is not expected to transform this team now.

Sergino Dest, the latest arrival from Ajax, is 19, although he can expect to feature more regularly to fill the void at right-back.

Barcelona could not afford Lautaro Martinez of Inter Milan or Memphis Depay at Lyon, leaving Koeman with a squad that is neither the one he wanted nor planned for.

Yet his job is still somehow to get Barca competing again with Europe's elite.