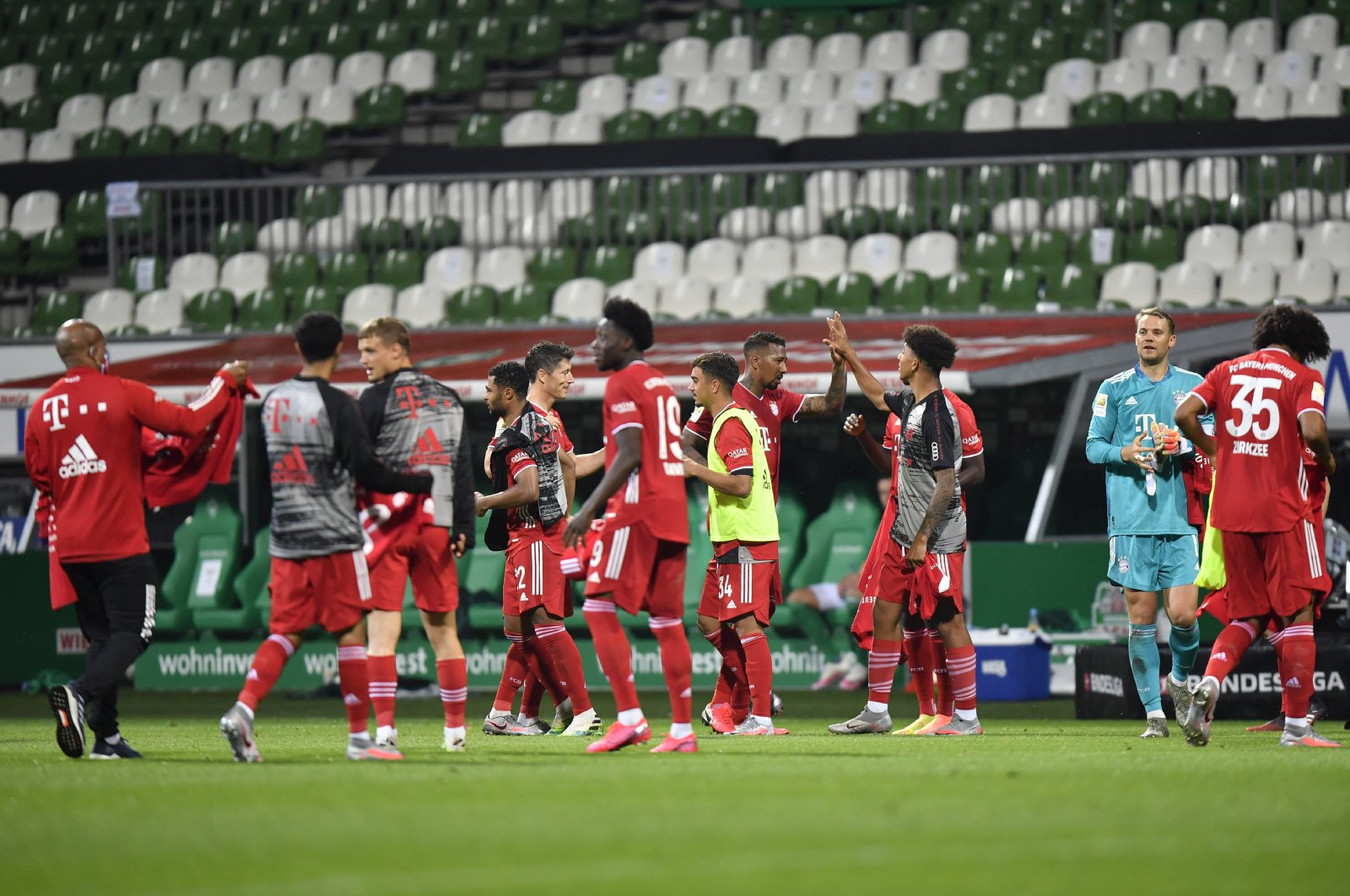 An eighth straight Bundesliga title for Bayern Munich looked a long way off when Niko Kovac was sacked in November, but with the arrival of Hansi Flick, the Bavarian side is now aiming for a triple

This celebration, though, was unlike any of the previous seven.

The players' cheers echoed around an empty stadium after a 1-0 win at Werder Bremen on Tuesday secured the title with two rounds to go.

With no fans in the stands because of the coronavirus pandemic, it was a subdued and strange display of emotions as the players put on commemorative T-shirts and waved to their absent supporters.

German media have dubbed the team the “Geister-Meister” – the ghost champions.

“Celebrating without the fans is a bit complicated,” Lewandowski told broadcaster Sky. “The atmosphere is missing and something else, not the motivation, but the passion from the fans.”

The game which secured the title was anything but typical Bayern, which has made a habit of exuberant, high-scoring wins.

Robert Lewandowski's goal earned a hard-fought, physical win over Werder which became a battle after Alphonso Davies was sent off in the 79th minute. If not for a late one-handed save by goalkeeper Manuel Neuer, the celebrations would have had to wait.

The win put Bayern 10 points clear of second-place Borussia Dortmund, which can earn a maximum of nine points from its three remaining games.

“Time to celebreight,” the club wrote on Twitter to mark record-extending streak of titles.

Werder, which is fighting against relegation, kept Bremen at bay for most of the first half but the champions still found a breakthrough. Jerome Boateng played a perfectly weighted ball over the defense in the 43rd minute for Robert Lewandowski to control on his chest and hit past the goalkeeper for his 31st Bundesliga goal this season.

Bayern finished with 10 men after a second yellow card for Alphonso Davies. The Canadian left-back had a game of extremes, setting a new league record for fastest sprint, but also coming close to a straight red card after seemingly kicking out at Werder's Leonardo Bittencourt. Davies only received a yellow card for that incident but was later booked again for a clumsy challenge.

Werder used its full coronavirus-era allowance of five substitutions to bring on extra attackers and chase a draw. They would have had a point if not for Neuer, who made a crucial late diving save to stop Yuya Osako's header.

At the final whistle, coach Hansi Flick brushed aside social distancing rules to hug his staff as a smattering of club officials in the stands shook hands.

That made Germany the first major European league to crown a champion after resuming play amid the coronavirus pandemic. Paris Saint-Germain was named French champion in April, but that was after the rest of the season was canceled.

Bayern powered to its 30th German title with a perfect record of seven wins in the Bundesliga since it resumed last month in empty stadiums amid the coronavirus pandemic. Hansi Flick has coached Bayern to 26 wins from 29 games in all competitions since he took over in November after Niko Kovac had led the team to a 5-1 loss at Eintracht Frankfurt.

“When Hansi took over the helm, he quickly got the ship going again,” Rummenigge said.

Flick started out as an interim coach but was given an extension to 2023 in April.

Bayern hasn’t lost a competitive game since Dec. 7 and has only dropped points once in 2020, in a 0-0 draw with Leipzig in February.

Bayern is chasing a possible triple. It can add the German Cup if it beats Bayer Leverkusen in the July 4 final and is in contention for the Champions League. Europe’s premier club competition was postponed because of the coronavirus but is due to finish in a tournament format in August.

“We've got enough time to get ready for it,” Lewandowski said of the Champions League.

Germany's relatively early finish is likely to leave Bayern a month without competitive games after the German Cup final. Bayern still needs to play the second leg of a last-16 fixture with Chelsea after winning the first game 3-0 in February.

Last-place Paderborn was relegated after losing 1-0 Wednesday to Union Berlin. Borussia Monchengladbach moved back into the Champions League places in fourth with a 3-0 win over Wolfsburg. Freiburg beat Hertha Berlin 2-1.