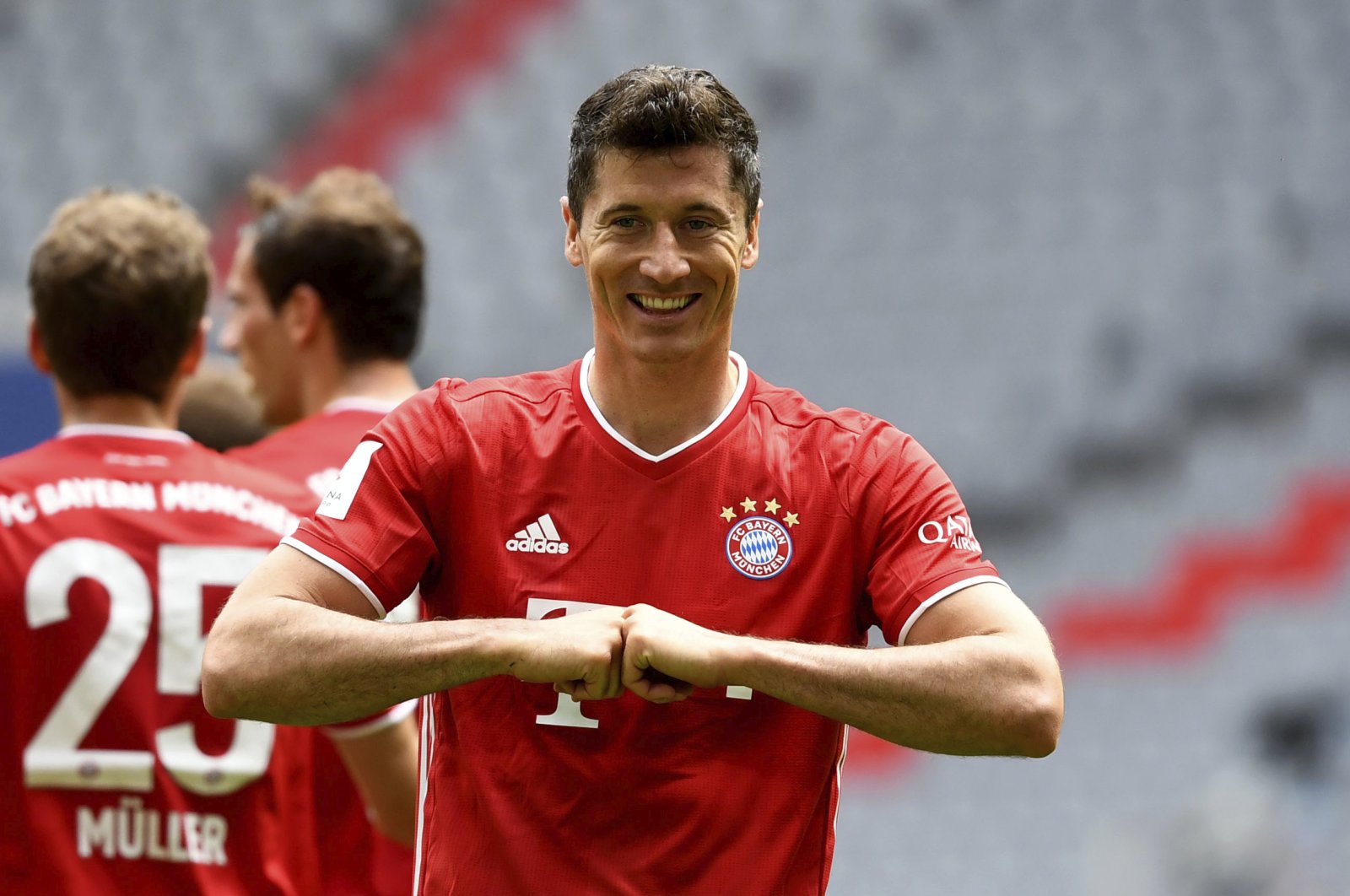 Robert Lewandowski struck twice as champions Bayern Munich eased past Freiburg 3-1 Saturday to secure a record 15th win in a row and the Pole became the first foreign player to score 33 goals in a Bundesliga season.

The Bavarians, who sealed their eighth successive title Tuesday with victory at Werder Bremen, went in front after 15 minutes through Joshua Kimmich's well-placed shot from a Lewandowski assist.

The striker then nodded in on the rebound in the 24th minute after Freiburg keeper Alexander Schwolow had blocked a Leon Goretzka shot before flicking in the third from a Lucas Hernandez cutback before halftime.

Freiburg had earlier cut the deficit through Lucas Hoeler.

Bayern, who earned a club record 15th consecutive victory in all competitions, took their foot off the gas after the break, allowing Freiburg to create a few chances.

Lewandowski can still add to his tally on the final matchday but is unlikely to match Gerd Mueller's Bundesliga record of 40 goals in a season set in 1972.

The previous best mark by a foreign player was 31 goals scored by Pierre-Emerick Aubameyang in the 2016-17 season.

Bayern, who needs five more goals to equal the club record of 101 for a season, is on 79 points.

Meanwhile, Erling Haaland scored twice as Borussia Dortmund sealed second place in the Bundesliga with a 2-0 win at third-place Leipzig on Saturday.

On his first professional start, 17-year-old American Gio Reyna set up Haaland on a counterattack in the 30th minute. It was Rayna’s first assist in the league.

The 19-year-old Haaland also hit the crossbar. The Norwegian had to wait until injury time before he grabbed his second – and 13th goal in 14 league appearances – set up this time by Julian Brandt.

It means Dortmund is assured of second place with one game of the season remaining. Despite the defeat, Leipzig is virtually assured of Champions League football next season.

Leipzig is one point ahead of Borussia Mönchengladbach, which took advantage of Bayer Leverkusen’s 2-0 loss at Hertha Berlin to move fourth with a 3-1 win at already relegated Paderborn.

Leverkusen needed a win to stay ahead of Gladbach in fourth, the last place for Champions League qualification, but failed to make the most of a good start and couldn't recover after Matheus Cunha fired Hertha into a 22nd-minute lead.

Dodi Lukebakio, who combined with Krzysztof Piatekto set up Cunha, scored Hertha’s second goal early in the second half, when Piatek gave him an easy finish.

It left Leverkusen two points behind Gladbach in fifth, three points behind Leipzig, but with a vastly inferior goal difference to the energy drink manufacturer-backed club.

Leverkusen now needs a favor from Hertha, which visits Gladbach in the last round, while it hosts Mainz.

Mainz players lifted their right arms in solidarity with the Black Lives Matter movement after Robin Quaison’s opening goal in a 3-1 win over 17th-place Bremen.

The team above Bremen, Fortuna Düsseldorf, earned a hard-fought 1-1 draw at home to Augsburg.

Rouwen Hennings thought he had given Düsseldorf the early lead with a powerful shot, but video review ruled it out for handball in the build-up.

Augsburg promptly scored through Florian Niederlechner, but Hennings hit back with a goal from outside the box to level it up. Fortuna threw players forward in stoppage time in search of a win that would have removed the threat of automatic relegation, but Augsburg held firm for the draw.

Four-time champion Bremen is two points behind Fortuna and will need a win over Cologne next week to have any chance of avoiding dropping out of the top division for the first time since 1981.

Either Düsseldorf or Bremen will face a playoff against the third-place team from the second division.

Union Berlin, still celebrating after clinching its survival on Wednesday, slipped to a 4-0 loss at Hoffenheim, which booked its place in the Europa League next season.

Schalke’s club-record winless run stretched to 14 games after a 4-1 defeat at Wolfsburg, which also booked a Europa League qualification place.