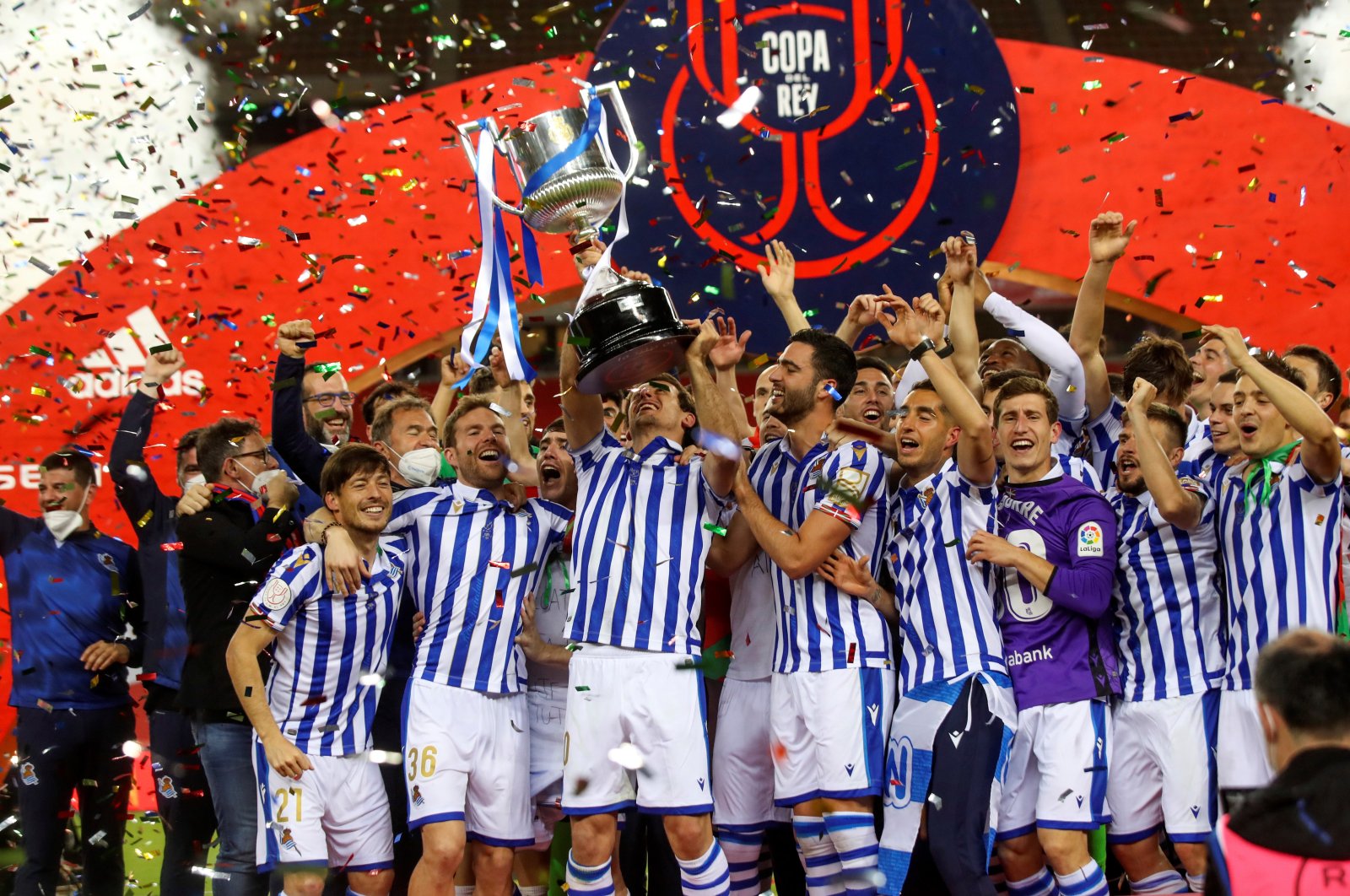 Sociedad ended a three-decade title drought when it beat Bilbao in the final held in Sevilla. Bilbao will have another shot in just two weeks when it plays Barcelona in the 2021 edition of the Copa del Rey final.

Mikel Oyarzabal scored the only goal of an intense, scrappy contest dominated by defense. The Spain striker drilled his penalty kick into the right corner in the 63rd minute after Iñigo Martínez fouled Portu Portugués in the box following a precise pass by Mikel Merino.

The match had been postponed since the end of last season in the hope that the coronavirus pandemic would improve enough to allow fans to attend the highly anticipated clash between the two regional rivals.

But with coronavirus still forcing strict limits on social gatherings in Spain, officials said it was impossible for spectators to be allowed in at Sevilla’s La Cartuja Stadium.

The impact of the virus, which has claimed more than 75,000 lives in Spain, was evident even in the celebrations.

"There are many people who we would have liked to share this with, family and friends who have left us in the worst way possible,” Oyarzabal said with tears in his eyes. Real's captain joined their youth academy aged 14.

"You remember everybody, all the people who would have loved to be here, people who have left us. This is for everyone, my family, my friends. It means everything."

Sociedad, which is based in San Sebastián, had only won the Copa del Rey twice previously in its history, in 1909 and in 1987, its last major trophy.

Sociedad coach Imanol Alguacil dedicated his biggest night to those fighting the pandemic.

"Thanks to the health workers, to those who are saving lives,” Alguacil said. "I thought of them after our win. I dedicate this cup to them.”

Bilbao, whose 23 cup titles are second to Barcelona’s record of 30, has now lost the cup final four times since it last won the competition in 1984.

"This is a tough blow,” Bilbao defender Óscar de Marcos said. "It’s true we have another final in 15 days, but losing a final always hurts. We missed our fans, who are with us through the good times and the bad.”

Before the match, a few thousand Bilbao fans violated public health restrictions in place for the coronavirus when they rallied in rowdy, tightly packed groups in Bilbao city center. At least one trash container was in flames near a crowd of mostly young people, many wearing Bilbao’s red-and-white shirts.

Bilbao’s police made pleas on social media for the crowds to go home. The city’s mayor also criticized the gatherings.

"Some lunatics are provoking incidents before the final. And what about the families that are suffering from COVID and cannot enjoy this historic day? You do not represent the values of Athletic or our city,” mayor Juan Mari Aburto wrote on Twitter.

Except for the move that led to Oyarzabal's goal, it was a match that was dictated by the two defenses.

Merino helped tilt the match in Sociedad’s favor with a perfectly weighted pass.

Merino’s long ball to meet Portu’s run into the area left Martínez with the choice of either letting the forward free to size up goalkeeper Unai Simón, or bring him down. Martínez opted for the foul, and barely escaped being sent off.

The referee initially showed Martínez a red card but, after a video review, he changed it to a yellow card and allowed the centerback to stay in the match.

But once Sociedad was ahead it never let Bilbao mount a comeback.

"I was proud of my players before the match and I still am now,” said coach Marcelino García Toral, who led Bilbao to the Spanish Super Cup title in January by beating Barcelona in the final.

"I am sad because we were not ourselves. We have to congratulate Real Sociedad and analyze with calm what we need to improve.”