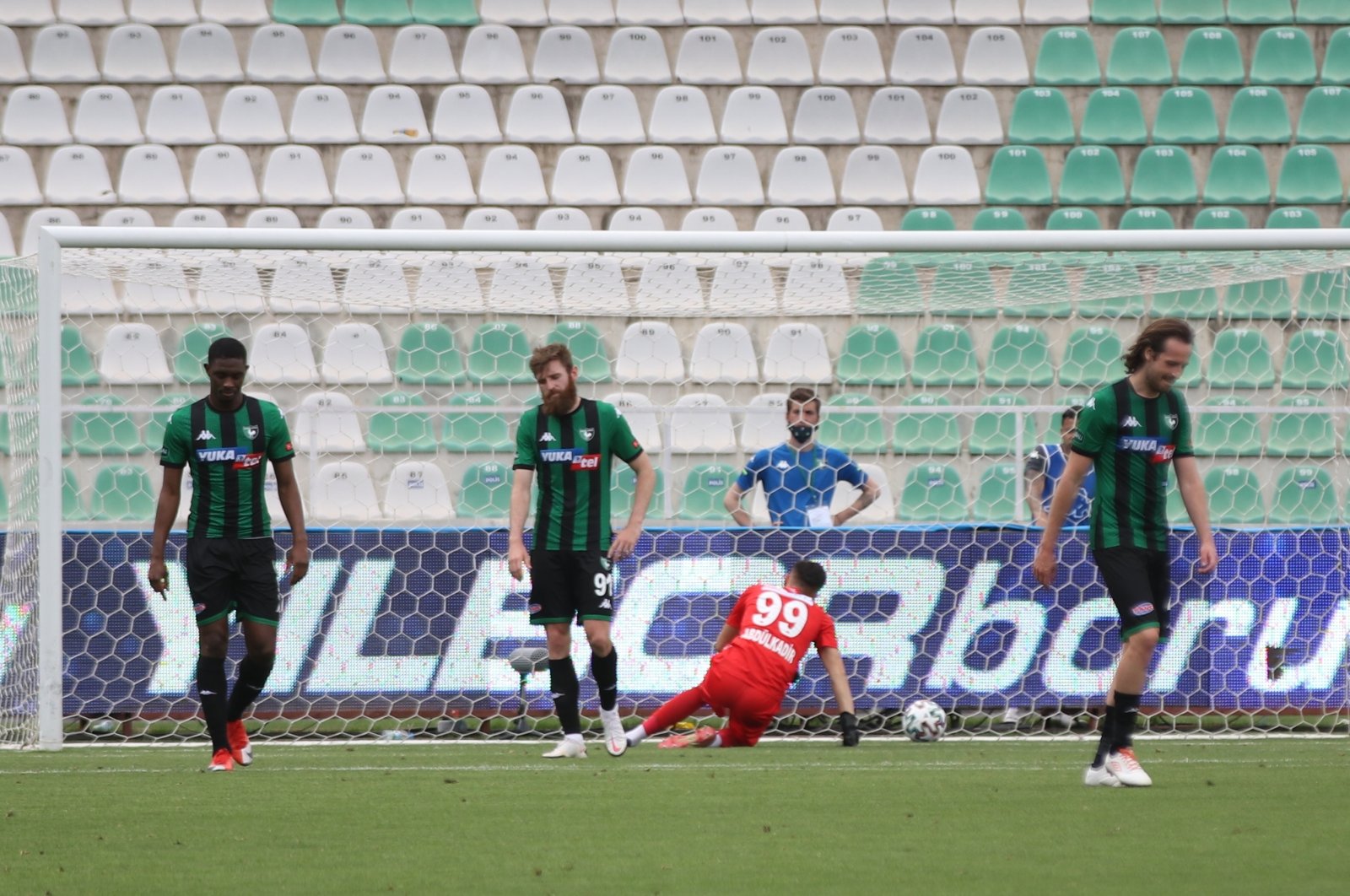 Denizlispor players react after conceding a goal against Rizespor in the Turkish Süper Lig at the Atatürk Stadium, Denizli, western Turkey, May 2, 2021 (AA Photo)
by DAILY SABAH May 03, 2021 12:32 pm
RECOMMENDED

Aegean side Yukatel Denizlispor became the first club to throw in the towel in the Turkish Süper Lig's relegation zone as eight other teams battle for survival with three weeks remaining.

After losing 1-0 in Sunday's home game against Black Sea club Çaykur Rizespor, Denizlispor, long anchored to the bottom of the league, was guaranteed relegation with just 28 points.

The loss marked Denizlispor's fourth relegation from the top division of Turkish football and the end of its 21st stint overall. They were promoted in the 2019-2020 season after a nine-season hiatus, finishing 14th in an unsuccessful campaign that saw four different coaches.

The club changed five coaches this season, finally hiring its former captain Ali Tandoğan. "I'm maybe more saddened than anyone else as a former player who saw promotion to the Süper Lig with Denizlispor, where I played for five years and served as its captain," Tandoğan said at the post-match press conference held in Denizli Atatürk Stadium.

In the match, Paraguayan striker Braian Samudio's 72nd-minute goal helped Rizespor clinch the victory that guaranteed his team's place in the Süper Lig next season.

Currently 12th with 45 points, Rizespor will be playing against 14th-placed Yeni Malatyaspor and last year's champion, currently 15th-placed Medipol Başakşehir in game week 40 and 42, respectively. Both teams are ties with 40 points and face the risk of relegation alongside 12th Antalyaspor with 43 points, 16th MKE Ankaragücü and 17th Kayserispor tied on 38 pts, followed by 18th Kasımpaşa and 19th BB Erzurumspor with 37 points each and 20th Gençlerbirliği, who has 35 points.

As relegations were suspended last season due to the ongoing COVID-19 pandemic, 21 teams compete in this 2020-2021 Turkish Süper Lig and four teams will be relegated at the end of the season, meaning three more relegation spots are left to be determined in the final three weeks.

Four important matches regarding the relegation zone are due to be played Monday. In three out of its four remaining matches, Istanbul giant Fenerbahçe, which technically has the chance to clinch the title despite an eight-point gap with leader Beşiktaş, will be playing against BB Erzurumspor, MKE Ankaragücü and Kayserispor, respectively.