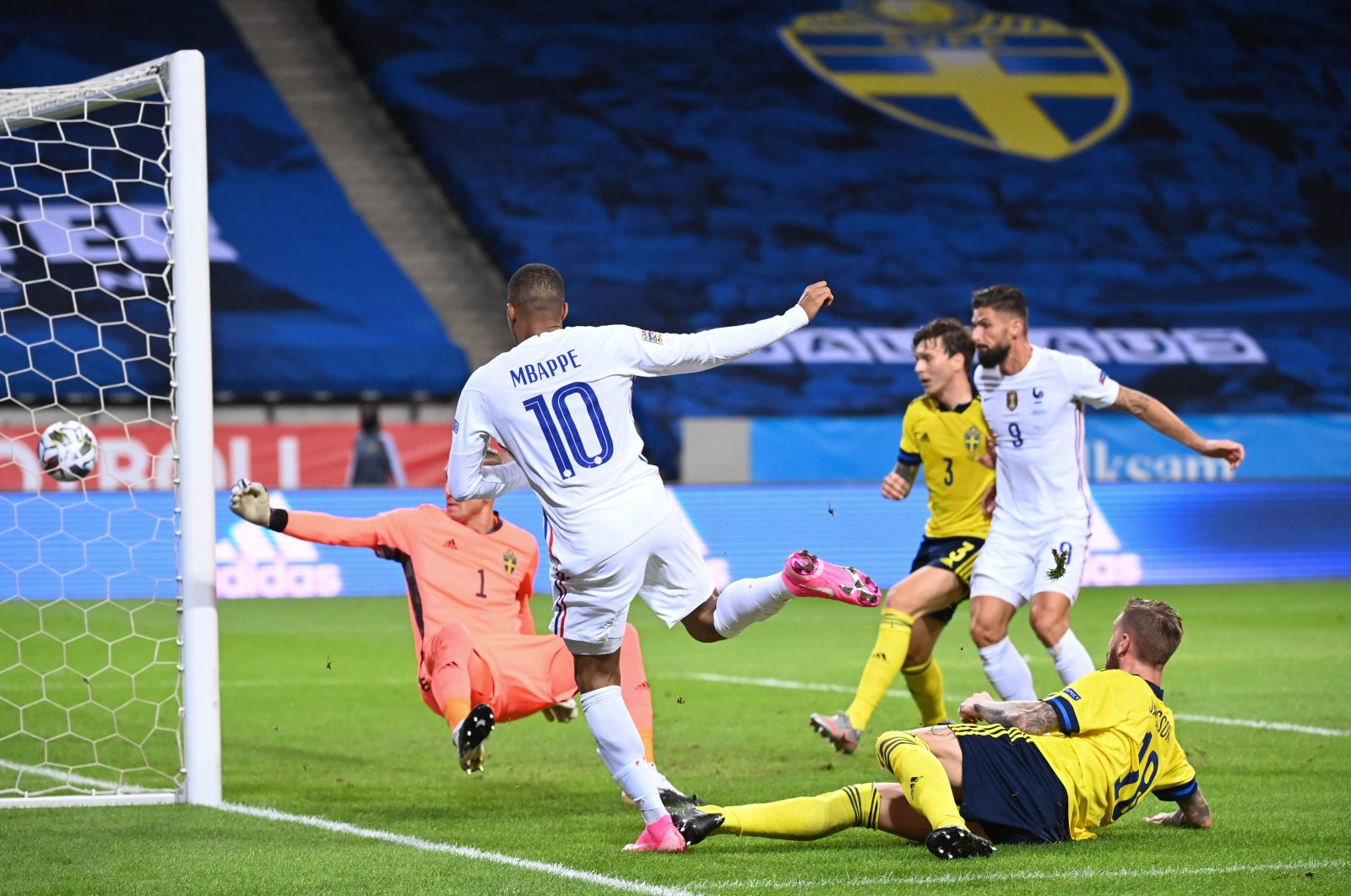 World champion France, defender Portugal, Belgium and England all enjoyed winning starts to their UEFA Nations League campaigns even if there were signs of rust following the coronavirus shutdown

Portugal opened its Nations League defense with a dominant 4-1 victory over Croatia on Saturday while World Cup holder France, Belgium and England also picked up wins.

England needed a stoppage-time penalty to beat Iceland 1-0 while France saw off Sweden by the same scoreline.

Portugal shrugged off the absence of Cristiano Ronaldo to thrash Croatia 4-1 with top-ranked Belgium coming away from Denmark with a 2-0 win.

Four years on from one of English football's most embarrassing nights in losing 2-1 to Iceland at Euro 2016, England was far from the free-scoring force that romped through Euro 2020 qualifying in its first match for 10 months.

Harry Kane had an early goal wrongly ruled out for offside before Kyle Walker was sent-off for two bookable offenses 20 minutes from time.

All of Iceland's good defensive work was undone in the 89th minute when Sverrir Ingason was also harshly dismissed for a second booking when he blocked Sterling's shot with his arm.

With Kane having been replaced by Mason Greenwood, Sterling took responsibility from the spot, but the drama did not end there.

Straight from kick-off, Joe Gomez was adjudged to have bundled over Holmbert Fridjonsson inside the area, but Bjarnason blazed the resulting penalty over.

"The sending off is a key moment because it is very difficult to win games of football when you go down to 10 men. It was an unnecessary red card," said Southgate of Walker's dismissal.

'Got away with it'

"We leave here with the win but a bit flat because, in the end, it feels like we got away with it."

Kylian Mbappe scored with France's only shot on goal in Solna to give the world champions a 1-0 victory over Sweden.

Mbappe picked up the ball wide of the goal in the 41st minute, squeezed past two defenders, waited for goalkeeper Robin Olsen to go down and then clipped the ball just inside the post from the narrowest of angles.

"It was a committed match, not a great match," said France manager Didier Deschamps. "It was a good back-to-school game, considering the fitness levels."

In Porto, Cristiano Ronaldo was missing with an infected toe – caused by a bee sting according to Italian media – but Portugal was still too good for a disappointing Croatia.

Joao Cancelo, Diogo Jota, with his first international goal, Joao Felix and Andre Silva were all on target for Portugal who also hit the woodwork three times.

"It has been a long time since we all got together and some players came straight from their vacation, but the team responded well," said Felix.

Croatia was without Luca Modric and Ivan Rakitic who boast a total of 233 caps between them.

'Not the Croatia I know'

Bruno Petkovic grabbed a stoppage-time consolation for the visiting side.

"This wasn't the Croatia I know. We let them do whatever they wanted. There was no aggression in our game – it should have been 4-0 in the first half," said Croatia defender Dejan Lovren.

Belgium, without the retired Vincent Kompany and Kevin de Bruyne, who was attending the birth of his third child, was in front after just nine minutes.

Mertens added the second in the 77th minute when the Napoli striker pounced on a loose ball after Kasper Schmeichel had blocked a Youri Tielmans effort with his legs.