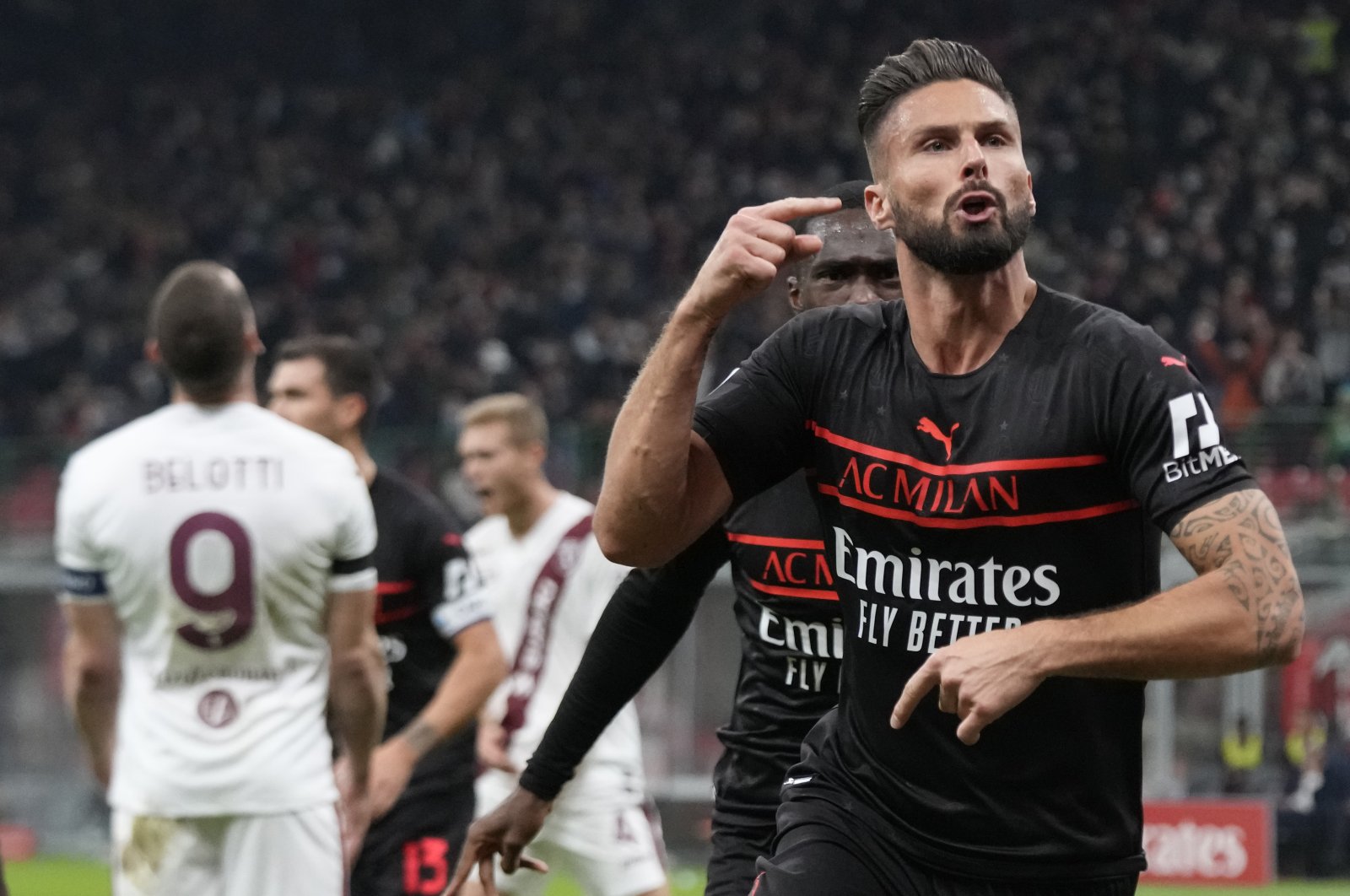 AC Milan moved to the top of the Serie A on Tuesday with a 1-0 win over Torino, courtesy of a solitary strike from French veteran Olivier Giroud.

Giroud tapped home his fourth league goal since arriving from Chelsea in the summer in the 14th minute of a largely dreary contest to move Milan three points clear in the first place.

Napoli can however reclaim the top spot on Thursday with a home win over Bologna.

"I'm very happy, we did well early in the match and afterward Torino didn't create lots of chances," said Giroud in faltering Italian to DAZN before switching to English.

"We have the three points which is the most important thing. We play every three days and it's very difficult for the body, so everything was not perfect but we are very pleased with the win tonight."

It was a sixth straight Serie A win for Stefano Pioli's side on the day Milan announced it had halved its losses to 96.4 million euros ($111.8 million).

However, with a long injury list slowly being reduced it was far from the vintage performance against a Torino team who played its part and could have earned at least a point with some sharper finishing.

Andrea Belotti was substituted in the 54th minute, seconds after the Italy striker scuffed a presentable opportunity after being well set up by Karol Linetty.

And Praet left the home fans with their hearts in their mouths 11 minutes later when his shot took a massive deflection off Fikayo Tomori and clipped the top of the crossbar.

Torino pushed for a leveler but Milan held for the win with some frantic defending.

Venezia fell to a late 2-1 home defeat to Salernitana after Ethan Ampadu's strange sending off left the hosts down to 10 men for more than 20 minutes.

Andrea Schiavone swept home the winner for Salernitana in the 95th minute in Venice to complete a come-from-behind win in the clash between struggling promoted sides.

The away side moved off the bottom of the table with seven points but is still in the relegation zone despite its first away win of the season.

It is level with third-from-bottom Genoa, who earned a 1-1 draw at Spezia thanks to Domenico Criscito's 85th-minute penalty.

"We need to keep up this rhythm because it's important. We played well, we were all together, today you saw a group that wanted to win and the three points were very important," Franck Ribery told DAZN.

Salernitana had a man advantage from the 67th minute, with the scores level through goals from Mattia Aramu and Federico Bonazzoli.

Wales midfielder Ampadu, 21, performed what looked to be a perfect tackle to dispossess Ribery, but referee Marco Di Bello pulled out his red card.

Venezia players surrounded Di Bello in protest and the match official then went to the pitchside screen to check his decision after being prompted by VAR.

However, Di Bello inexplicably confirmed his decision to send off Ampadu, on loan at Venezia from Chelsea.

"We had a referee who was the worst performer on the pitch," Venezia coach Paolo Zanetti told DAZN.

"These are important matches in which we're fighting for our survival, they can't be influenced by things like that."