Gnabry scores double to give Bayern 3-0 win at Chelsea 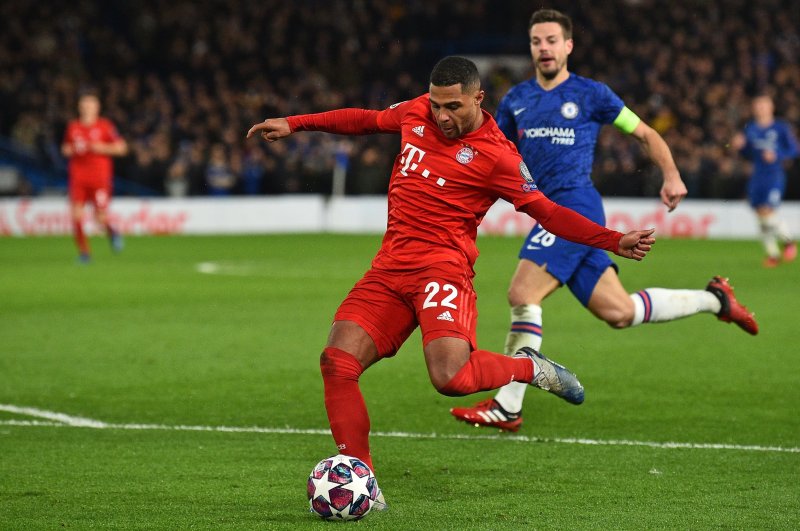 Bayern Munich's Gnabry shoots to score the second goal during the Champions League round of 16 match against Chelsea in London, Feb. 25, 2020. (AFP Photo)
by French Press Agency - AFP Feb 26, 2020 1:01 am
RECOMMENDED

Serge Gnabry fired Bayern Munich to the brink of the Champions League quarterfinals as the German's double inspired a superb 3-0 rout of Chelsea in the last-16 first leg at Stamford Bridge on Tuesday.

Gnabry had tormented Tottenham with four goals in Bayern's 7-2 victory in north London earlier this season and the former Arsenal winger returned to the English capital to push Chelsea to the brink of elimination.

The 24-year-old's time with Arsenal was a disappointment and he even flopped during a loan spell at West Bromwich Albion.

But he has been reborn with Bayern and his two goals in the space of three minutes left Hansi Flick's side within touching distance of the last eight.

Robert Lewandowski got Bayern's third before Chelsea defender Marcos Alonso was sent off in the 83rd minute.

Chelsea will need another Munich miracle in the second leg on March 10 to overturn the deficit at the Allianz Arena, where they famously beat the German club in the 2012 Champions League final.

This hasn't been a vintage year for Bayern, but they have been energized since the exit of disliked boss Niko Kovac and out-classed Chelsea in all phases.

None of the previous six teams to have won all of their Champions League group games have lifted the trophy that season, but five-time winner Bayern will fancy its chances of breaking that duck if it can maintain this form.

Chelsea boss Frank Lampard admitted his young team were "underdogs" against a club of Bayern's vast European experience and his pre-match prediction proved spot on in a chastening defeat.

Bayern set the tone when Thomas Muller forced a save from Willy Caballero inside the first minute after stealing possession from Jorginho.

Flick had warned Chelsea that Lewandowski was in the "form of his life" and the Bayern striker escaped Andreas Christensen for a stinging shot that Caballero blocked with his face.

Ross Barkley surrendered possession carelessly deep inside his own half and Muller pounced with a reverse pass to Lewandowski, whose toe-poked effort was well saved by Caballero.

Bayern's pressure was mounting and Muller drifted onto Gnabry's cross to flick a back header against the bar.

Lampard had kept faith with Olivier Giroud after the 33-year-old marked his first start since November with a goal in Saturday's win against Tottenham.

But retaining Giroud at the expense of Tammy Abraham was a big gamble and the Chelsea striker's muscular but immobile presence offered little to unsettle Bayern.

Chelsea finally broke out with intent when Mateo Kovacic teed up Alonso for a low drive that forced Manuel Neuer to save.

But Bayern remained the dominant force to such an extent that they may have rendered the second leg irrelevant.

They deservedly took the lead in the 51st minute with a superbly crafted goal.

Gnabry's deft control and pass sent Lewandowski into the Chelsea area and when he cut the ball back, his teammate made a perfectly-timed run to fire low past Caballero.

Moving the ball with pace and precision, Bayern was irresistible and increased its lead three minutes later thanks to another impressive combination from the Gnabry and Lewandowski double act.

Lewandowski nodded onto Gnabry, took the return pass from the winger and played a sublime through ball to Gnabry, who had accelerated away from the Chelsea defense to guide a cool finish into the far corner.

Bayern wasn't finished yet and Lewandowski became the first Bayern player to score in six consecutive Champions League matches when he tapped in from Alphonso Davies's 76th-minute cross for his 39th goal of the season.

Alonso's frustration at Chelsea's plight boiled over when he was sent off after a VAR review for whacking Lewandowski with his arm.