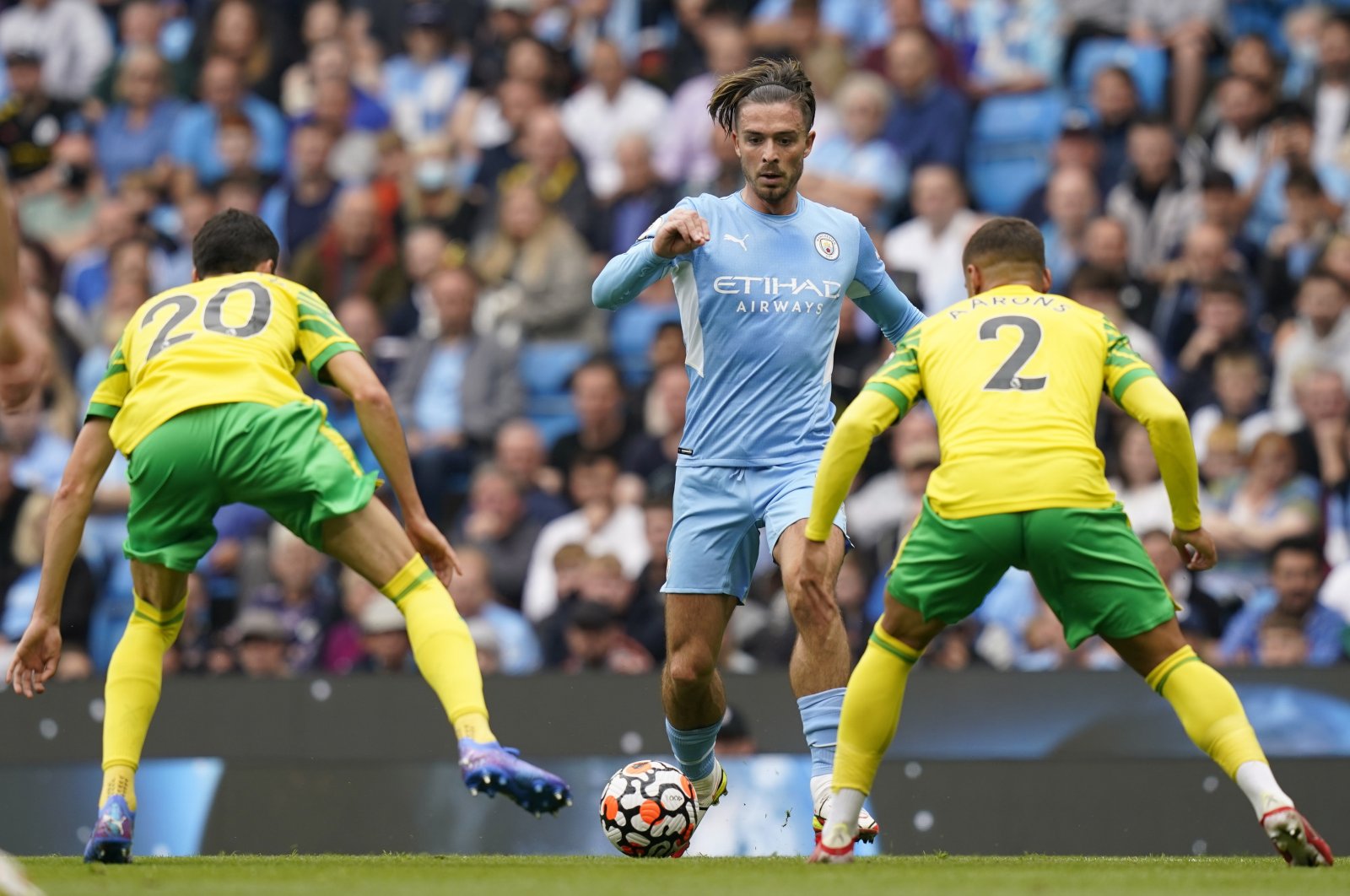 Title rival Liverpool, in the meantime, extended its perfect start with a 2-0 victory over Burnley.

Grealish marked his home debut following his British record 100 million pounds ($136 million) move from Aston Villa with a close-range effort to double City's lead after Tim Krul's own goal opened the floodgates at the Etihad.

Aymeric Laporte, Raheem Sterling and Riyad Mahrez netted in the second half to ensure City bounced back from last weekend's defeat at Tottenham.

Despite Grealish making the perfect start on his home debut, it was Gabriel Jesus who caught the eye in an unfamiliar role on the right of a front three.

"One of the reasons why I'm a manager is when you can work with people like Gabriel," said Guardiola.

"He was involved in three of our goals and is an incredibly important player for us."

It was the Brazilian forward's volleyed cross in the seventh minute that forced City's opener as Grant Hanley attempted to clear but instead hit Norwich goalkeeper Krul as the ball looped into the net.

Jesus was the creator again on 22 minutes when his cross reached Grealish at the far post and bounced in off the England midfielder.

Laporte scored in the 64th minute with a close-range finish after Norwich failed to clear a corner.

Jesus provided his third assist of the afternoon as Sterling tapped in after 71 minutes before Mahrez grabbed City's fifth with a simple finish in the 84th minute.

At Anfield, Liverpool earned a second successive wins thanks to goals from Diogo Jota and Sadio Mane, but Reds boss Jurgen Klopp was angry with the Premier League's new dictate for lenient refereeing.

Jota scored Liverpool's first goal in the 3-0 win at Norwich last weekend and the Portugal forward gave Klopp's men the lead again with an 18th-minute header from Kostas Tsimikas' cross.

Mane then made sure of the three points with a thumping finish from Trent Alexander-Arnold's through ball 21 minutes from time.

However, Klopp was frustrated that Sean Dyche's side, renowned for its physical approach, was able to get away with some thunderous challenges due to lenient refereeing.

"You saw these challenges of (Ashley) Barnes and (Chris) Wood on Virgil (Van Dijk) and Joel (Matip)," Klopp said.

"I am not 100% sure if we are going in the right direction with these decisions, if we go 10 years back.

"It is too dangerous. It is just hard. The rules are how they are but you cannot defend these situations."

Former Southampton striker Ings' moment of magic came in first-half stoppage-time, making it two goals in as many appearances for his new club.

Anwar El Ghazi got Villa's second from the penalty spot after Jamal Lascelles handled in the 62nd minute.

Patrick Vieira is still waiting for his first win as Crystal Palace manager after a 0-0 draw against Brentford in the first meeting between the London clubs for 44 years.