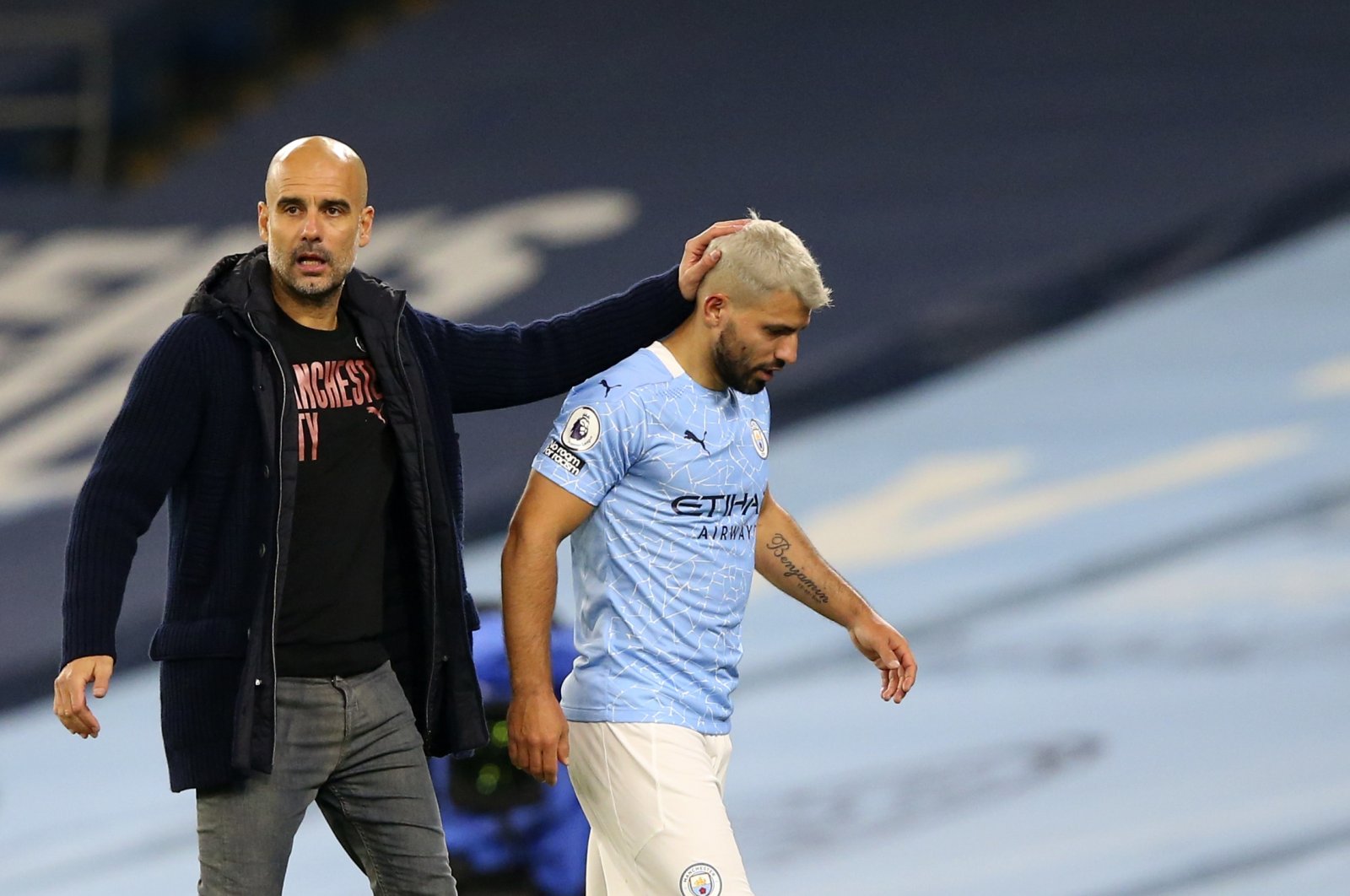 After making the worst start to a season since 2014, Manchester City and coach Pep Guardiola hope to turn things around with a win against Olympique Marseille in the Champions League

Manchester City manager Pep Guardiola needs to find quick resolutions to keep his team afloat in the Champions League as it prepares to face Olympique Marseille in France Tuesday.

The former Premier League champion has been plagued with problems since the start of the current campaign including a mounting injury list and some players isolating due to cases of coronavirus.

Riyad Mahrez, Aymeric Laporte and Ilkay Gündoğan all contracted the virus, with Gündoğan and Mahrez recently returning to action.

Laporte then suffered a muscle injury as well as Brazilian striker Gabriel Jesus, who limped off in their opening Premier League match against Wolverhampton Wanderers.

There is already a shortage in attack after Sergio Aguero picked up a new hamstring injury Saturday in his third game back from last season's knee injury, which cost Aguero four months playing time.

A quick break between the previous coronavirus-disrupted season and the next fixture list along with players going away on international duty has proved "too much" for Guardiola's star-studded squad to handle.

"That's why the players get injured," said Guardiola.

"It's no secret, so you just pray every day and hope everyone finishes the game without a problem. We've struggled a lot for many reasons. We have to take things game by game and see what happens."

The 1-1 draw at West Ham on Saturday confirmed that it is City's worst start to a season since 2014.

Two years ago, Guardiola's men were brushing aside the domestic competition in record-breaking trophy runs.

However, the departure of key players like defender Vincent Kompany, Spanish playmaker David Silva and the absence of an ailing Aguero has raised concern about a team that was considered as a goal machine.

Guardiola's contract with the club expires at the end of the season and currently, there has been no announcement of a planned extension.

This has led to speculation in British newspapers that Guardiola could leave next year as City plan a new direction but the Spaniard has refused to comment on such questions.

Elsewhere, Real Madrid will face Borussia Monchengladbach with a fresh confidence boost after the 3-1 win over Barcelona at the weekend.

The win at El Clasico came at a critical time for Madrid coach Zinedine Zidane, whose future at the club was looking questionable after a rocky start to the season.

A loss at home to newly-promoted Cadiz in the league set alarm bells ringing and the defeat to Shakhtar Donetsk last week in the Champions League opener that had media in Spain speculating over who might be able to come in at short notice to replace the French coach.

Mauricio Pochettino, currently without a club and Raul Gonzalez, already at the club as a youth team coach, were best-placed to relieve Zidane of his duties but after the events of Saturday, they can sit back down again.

Zidane went back to basics against Barcelona at the Camp Nou and his most reliable players stepped up to save him.

No one more so than Sergio Ramos, who delivered one of his best Clasico displays and scored the crucial second goal from the penalty spot.

The Spain defender had won the penalty that made it 2-1 and left Barcelona with too much to do to get back into the game.

The 34-year-old is still awaiting news on a new contract that will extend his current deal beyond the end of this season.

President Florentino Perez said when the team won the league in July: "He will finish his career here. He is more than a captain for us."

Ramos missed Real Madrid's first Champions League group game with a knee problem but he appears to be back to full fitness now and Madrid will need him because their defense suffers when he is missing.

Shakhtar already proved that lately. Real in the past also struggled against Roma, Juventus and Paris Saint-Germain when its talismanic captain has been missing.

Ramos will be joined by Eden Hazard for the second group game although it remains to be seen if this is really light at the end of the tunnel for Hazard or if Zidane just wants to keep him involved and feeling part of the group.

The Real Madrid coach indicated before the Shakhtar game last week that the Belgium international's injury was likely to keep him out for "a little longer than expected."

But he was named in the squad to travel to Germany on Sunday along with rookie right-back Sergio Santos.

The 19-year-old steps up from the youth team because of Real Madrid's crisis in that position with Dani Carvajal, Nacho Fernandez and Alvaro Odriozola all out injured.

Winger Lucas Vazquez is likely to play the position after he performed well there as a substitute against Barcelona at the weekend.