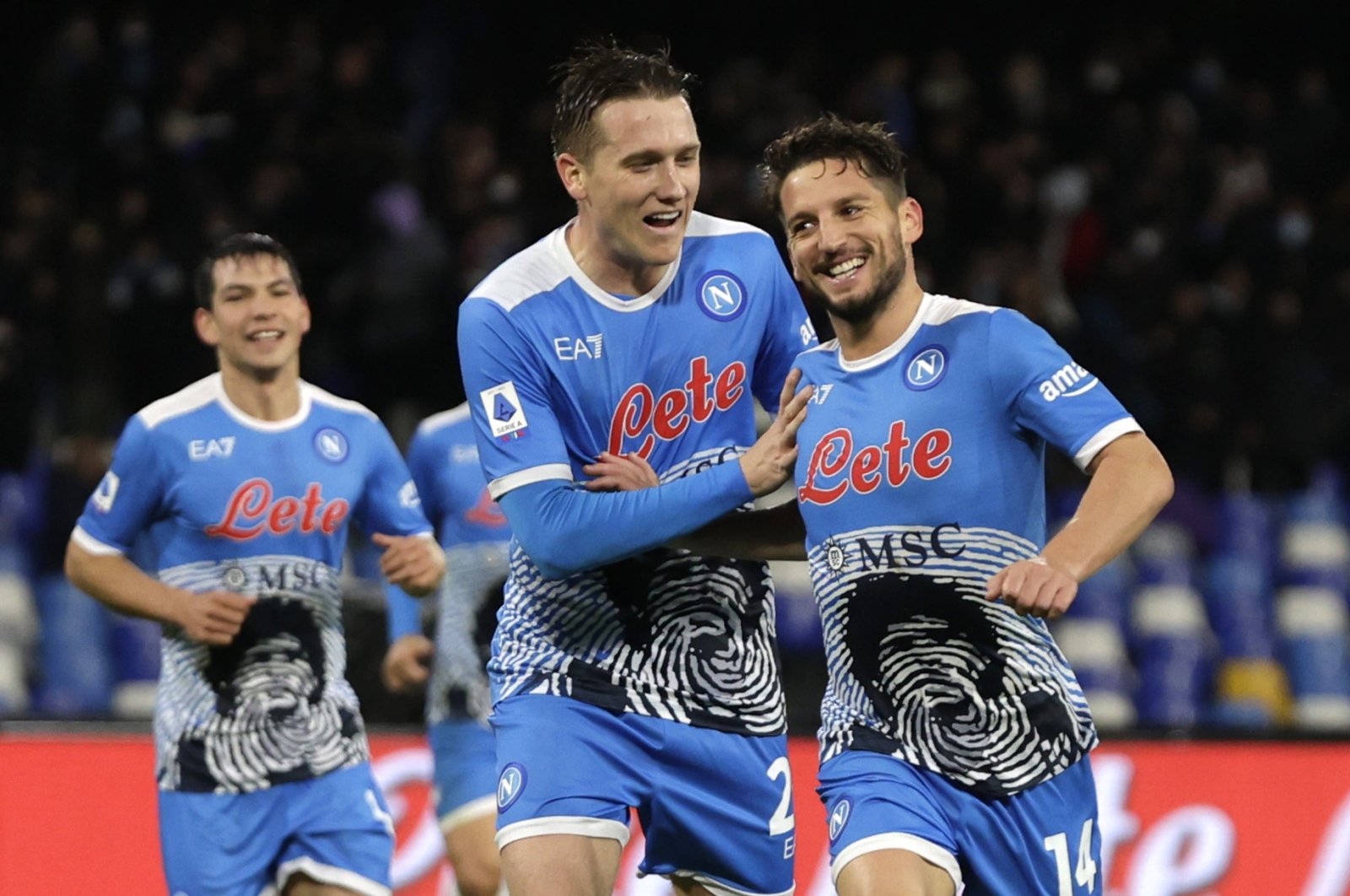 Serie A table topper Napoli extended its lead to three points on Sunday with a dazzling 4-0 win over Lazio that also marked club legend Diego Maradona's first anniversary of death.

Club great Maradona died on Nov. 25 last year and to mark the anniversary, Napoli unveiled a statue inside the Diego Armando Maradona Stadium prematch and wore shirts with the Argentine's face on them for the Lazio clash.

The performance was befitting of the man, too, with the home side blowing away Lazio with a stunning show of attacking football, racing into a 3-0 lead inside 29 minutes thanks to goals from Piotr Zielinski and a double from Dries Mertens.

With the job done, Napoli took its foot off the gas in the second half but Lazio did not register a single shot on or off target in response. Fabian Ruiz put the icing on the cake with a pinpoint fourth goal late on.

The result moved Napoli three points clear at the top of the standings after second-placed AC Milan slipped to a surprise defeat at home to Sassuolo earlier Sunday, while Lazio dropped to eighth following its second successive league loss.

"It is our best performance, especially as it comes after a couple of performances that were not up to our standards, so it means something that we beat a big club like Lazio this way," coach Luciano Spalletti told DAZN.

"Mertens brings that quality to the finishing but it would be reductive just to praise him. The whole team was wonderful, it had been a long time since we had this possession football with short, quick passes."

Elsewhere in Serie A on Sunday, a first-half goal from English striker Tammy Abraham was enough to earn AS Roma a 1-0 win over Torino that sent Jose Mourinho's men above its city rival Lazio into fifth.

Rain in Naples could not put a dampener on a special night for leader Napoli.

It took Zielinski just seven minutes to put his side in front after a relentless start from the hosts, drilling home from the edge of the penalty area after the ball had fallen into his path.

Then, Mertens channeled his inner Maradona to fire a sublime double. His first, in the 10th minute, was a superb solo effort, as he twisted and turned before finishing clinically.

His second, just before the half-hour mark, was a perfect curling strike over Lazio goalkeeper Pepe Reina.

In the second half, there was a party atmosphere in the stadium, with the home team pulling out flicks and tricks as Lazio offered no threat.

Ruiz capped Napoli's 11th win from 14 league games with a fine goal from long range in the 85th minute.

Earlier Saturday, champion Inter Milan had moved to within one point of the Serie A summit with a 2-0 win over Venezia, while Duvan Zapata piled on the misery for Juventus who are reeling from a probe into their accounts.

Hakan Çalhanoğlu continued his fine recent form in the 34th minute when he collected the ball and fizzed the opening goal through a crowd of players, and Lautaro Martinez added the second from the penalty spot deep in stoppage time.

Inter has won seven of its last nine matches in all competitions – drawing the other two – and is on a high after ensuring passage to the Champions League last 16 after a decade away midweek.

Inter only had one real scare when Samir Handanovic, who saved Inter with a miracle save in last weekend's win over Napoli, had to be at full stretch to tip over Mattia Aramu's long-range drive.

Atalanta, meanwhile, strengthened its hold on fourth place and Serie A's final Champions League spot thanks to Colombian Zapata's seventh goal in as many games in all competitions in the 28th minute in Turin.