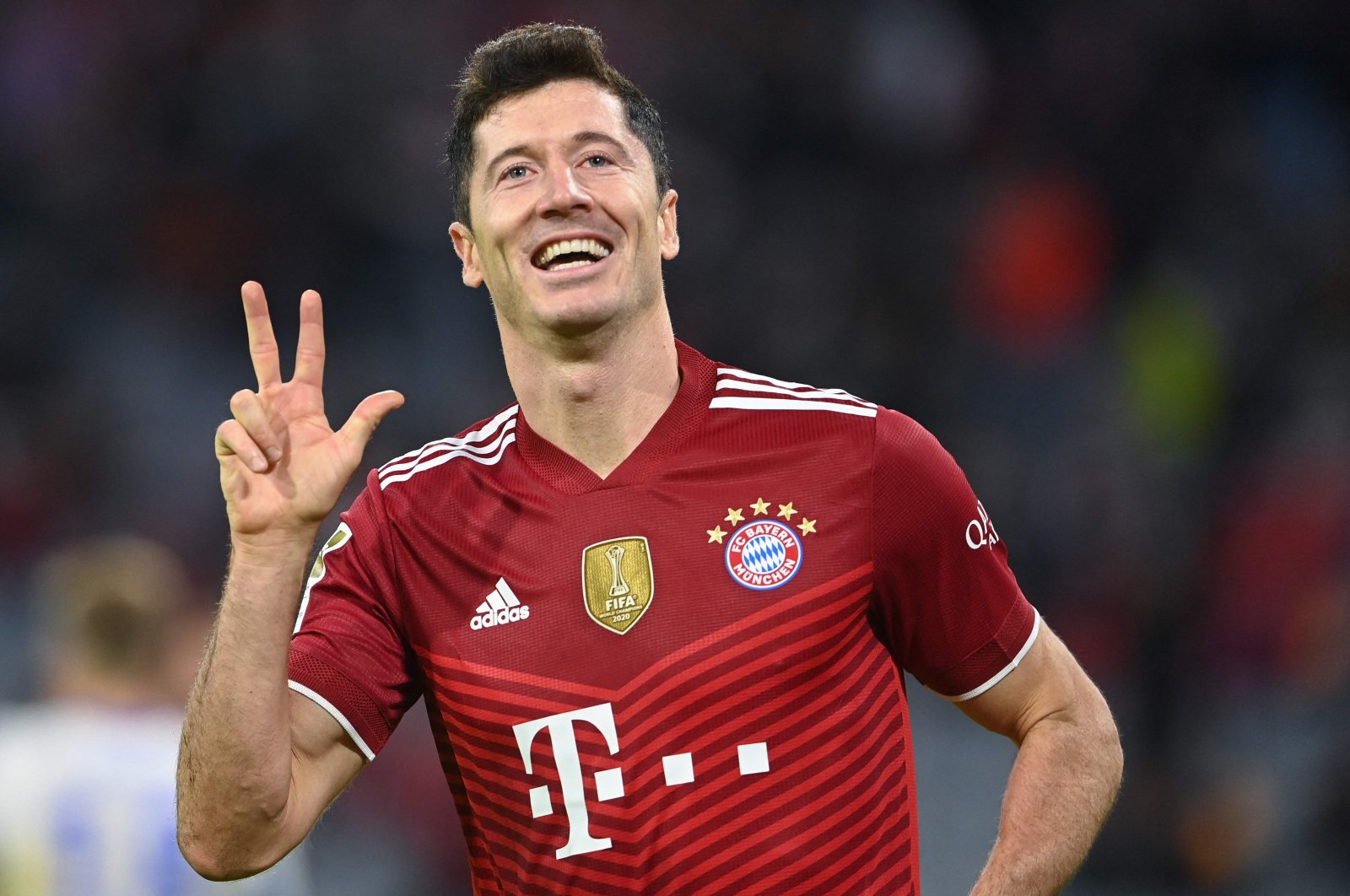 Bayern Munich's Robert Lewandowski scored a hat trick on Saturday to take his goal tally to 300 in total with the Munich side, breaking a record of goals scored in consecutive games as his team cruised past Hertha Berlin with a 5-0 win at the Allianz Arena.

The 33-year-old Lewandowski’s latest goals ensured he has scored in every game for the last 16 matches across all competitions for Bayern, going back to a 3-3 draw with Arminia Bielefeld on Feb. 15.

Bayern coach Julian Nagelsmann dropped misfiring winger Leroy Sane to the substitutes’ bench and started with the 18-year-old Jamal Musiala in his place. Sane was whistled by Bayern fans for a poor performance against Cologne last weekend.

The defending champions didn’t need long to get off the mark against Hertha. Lewandowski allowed Alphonso Davies’ cross through for the better-placed Thomas Müller to open the scoring in the sixth minute with a low shot inside the far post. Serge Gnabry and Musiala were also involved in what was a fine team move.

The home fans had to wait half an hour for the next goal, headed in by Lewandowski from close range at the second attempt after his first attempt from Gnabry’s cross hit the crossbar. The Poland star out-jumped two Hertha defenders to reach the rebound.

Hertha captain Dedryck Boyata made a crucial clearance as the home team threatened to run riot before halftime.

But Bayern resumed after the break when Musiala showed why he was given a starting spot by cutting inside and dispatching the ball inside the far post after Muller had won the ball from Deyovaisio Zeefuik.

Musiala – already a German international – got an ovation from Bayern fans when he went off for Sane in the 61st.

Sane made his case by cutting inside past two Hertha defenders, playing a one-two, and then setting up Lewandowski’s second goal in the 70th. The Poland star completed his hat trick in the 84th.

The 18-year-old Wirtz was called up by new Germany coach Hansi Flick on Friday for upcoming World Cup qualifiers against Lichtenstein, Armenia and Iceland.

Leverkusen, which routed Borussia Monchengladbach last weekend, got off to a great start when Augsburg’s Brazilian defender Iago chipped the ball over his own goalkeeper and into the net in the third minute.

Augsburg forward Florian Niederlechner added another own-goal in the 14th when he tried to stop Kerem Demirbay’s shot.

Niederlechner atoned by scoring in the 30th, profiting from a mix-up between Leverkusen defender Mitchel Bakker and goalkeeper Lukas Hradecky.

Leverkusen’s Moussa Diaby had a goal ruled out through VAR for a hand ball by Charles Aranguiz in the buildup.

Augsburg was pushing for an equalizer when Seoane reacted by bringing on Wirtz and Robert Andrich in the 65th. Wirtz made an immediate impact, setting up Patrik Schick in the 75th, then scoring himself in the 81st.

Freiburg held on for a 3-2 win in Stuttgart, which trailed 3-0 in the first half but couldn’t find any more goals in the second.