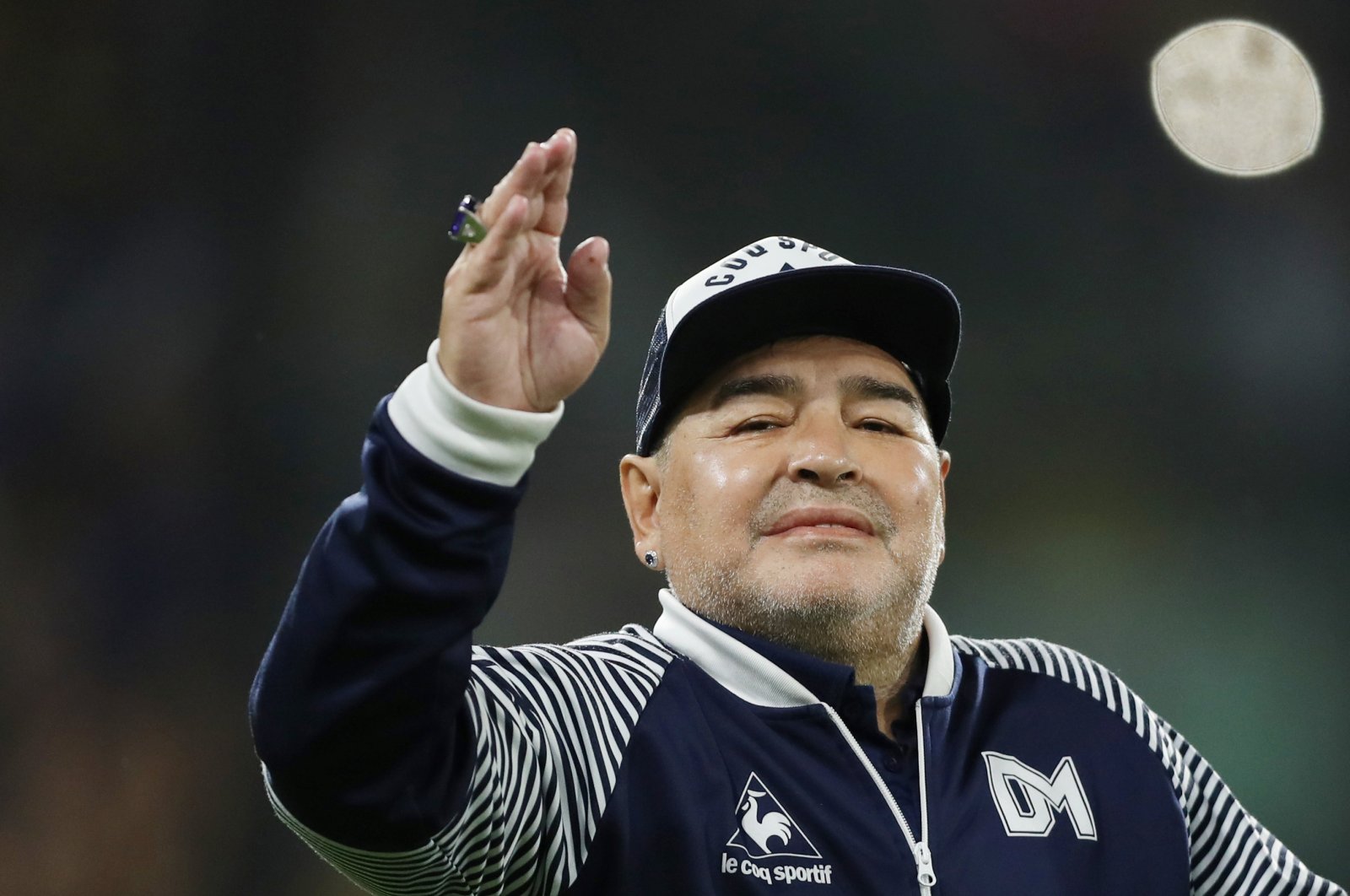 Notorious for his wild lifestyle, Argentina great Diego Armando Maradona turns 60 on Friday in far more sober circumstances sheltered in self-isolation to protect him from the coronavirus pandemic.

Having suffered two heart attacks in the last 20 years and contracted hepatitis, Maradona's precaution after a bodyguard started displaying coronavirus symptoms earlier this week is understandable.

A life of overconsuming cocaine and alcohol have taken their toll on the mercurial talent's health.

"It was impossible that this lad would turn out well," said former international and Boca Juniors teammate Hugo Perotti earlier this year.

Perotti was referring to Maradona's early fame that set him on a path to brilliance and glory but also addiction and almost tragedy.

Born in a poor Buenos Aires neighborhood on Oct. 30, 1960, Maradona quickly marked himself out as a special talent.

Since then, this charismatic and contradictory man has fallen many times only to rise again from the abyss, and always in his unique and inimitable way.

Defiant and ingenious, macho, a loyal friend and spiteful enemy, Maradona has always been magnetic.

"At 18 he couldn't walk around in Africa. A plane was stuck because the runaway was full of people," said Perotti.

"It was in 1981, when there was no internet, mobile phones, nothing. He surpassed every human and normal barrier. And I think he paid the consequences of all this."

First came the highs. Having made his name helping Boca win the Argentine title, he earned a move to Catalan giants Barcelona at just 21.

At 25 he – practically singlehandedly – dragged Argentina to World Cup glory at Mexico 86.

In the quarterfinal against England, he displayed both the devil in him and his genius, first scoring a goal with his hand – which he later dubbed the "Hand of God" – and then embarked on a mazy run, bamboozling the England defense to score one of the greatest goals in World Cup history.

Back in his homeland, he was idolized like a god, to the point that a group of fans created the Church of Maradona in devotion to him.

The next year he would lead ambitious Italians Napoli to their first Serie A title; a feat he would repeat three years later.

"I would like to always watch Diego, dribbling for all eternity," sang the rock band Ratones Paranoicos in one of the dozens of songs dedicated to Maradona.

But his demise had already begun.

The next year his Napoli career ended in disgrace after he was handed a 15-month ban for using cocaine – something he'd been rumored to have done since his Barcelona days.

The 1994 World Cup in the United States was supposed to be something of a resurrection for Maradona, but instead, he was sent home in disgrace after failing another dope test.

"They cut off my legs," Maradona complained. Realistically, although he played on for a couple of years back at Boca, his playing career was as good as over.

As a coach, he never enjoyed the same success, and certainly did not have the same flair.

Put in charge of the national team with a Lionel Messi in his pomp, Maradona's charges slumped out of the 2010 World Cup in South Africa with a 4-0 quarterfinal drubbing by Germany.

But his name ensured he was rarely short of offers, whether from clubs in the United Arab Emirates (UAE), Mexico or his homeland, where he is currently the coach at Gimnasia y Esgrima La Plata.

His coaching career has been regularly interrupted by bouts of ill-health, mostly self-inflicted.

In 2001, four years after his retirement, Maradona addressed a packed Bombonera – the home ground of his beloved Boca Juniors – and alluded to his addictions: "I've made mistakes and paid for it but the ball was never soiled."

That was a year after he suffered his first heart attack while on holiday in the Uruguayan seaside resort Punta del Este.

It sparked a radical decision to undergo gastric bypass surgery to lose 50 kilograms.

It wasn't the end of his troubles as alcohol abuse saw him taken to the hospital twice in 2007 suffering from hepatitis, after which he was treated in a psychiatric institution.

But he never stayed down for long, nor out of the headlines, particularly due to his friendships with various prominent left-wing leaders in Latin America, such as the late Cuban revolutionary leader Fidel Castro, or Venezuela's Hugo Chavez.

For 25 years he insisted he had only two daughters, Dalma and Giannina, born in 1987 and 1988 to Claudia Villafane, his childhood sweetheart who was his wife for 24 years.

Since their divorce, Maradona has admitted to fathering at least five additional children in Italy, Cuba and Argentina through extra-marital affairs.

He also had a child, Diego Fernando, in 2013 with his now ex-girlfriend Veronica Ojeda.

"Three more and you'll have a team of 11. You can do it!" Giannina goaded him sarcastically on Instagram.