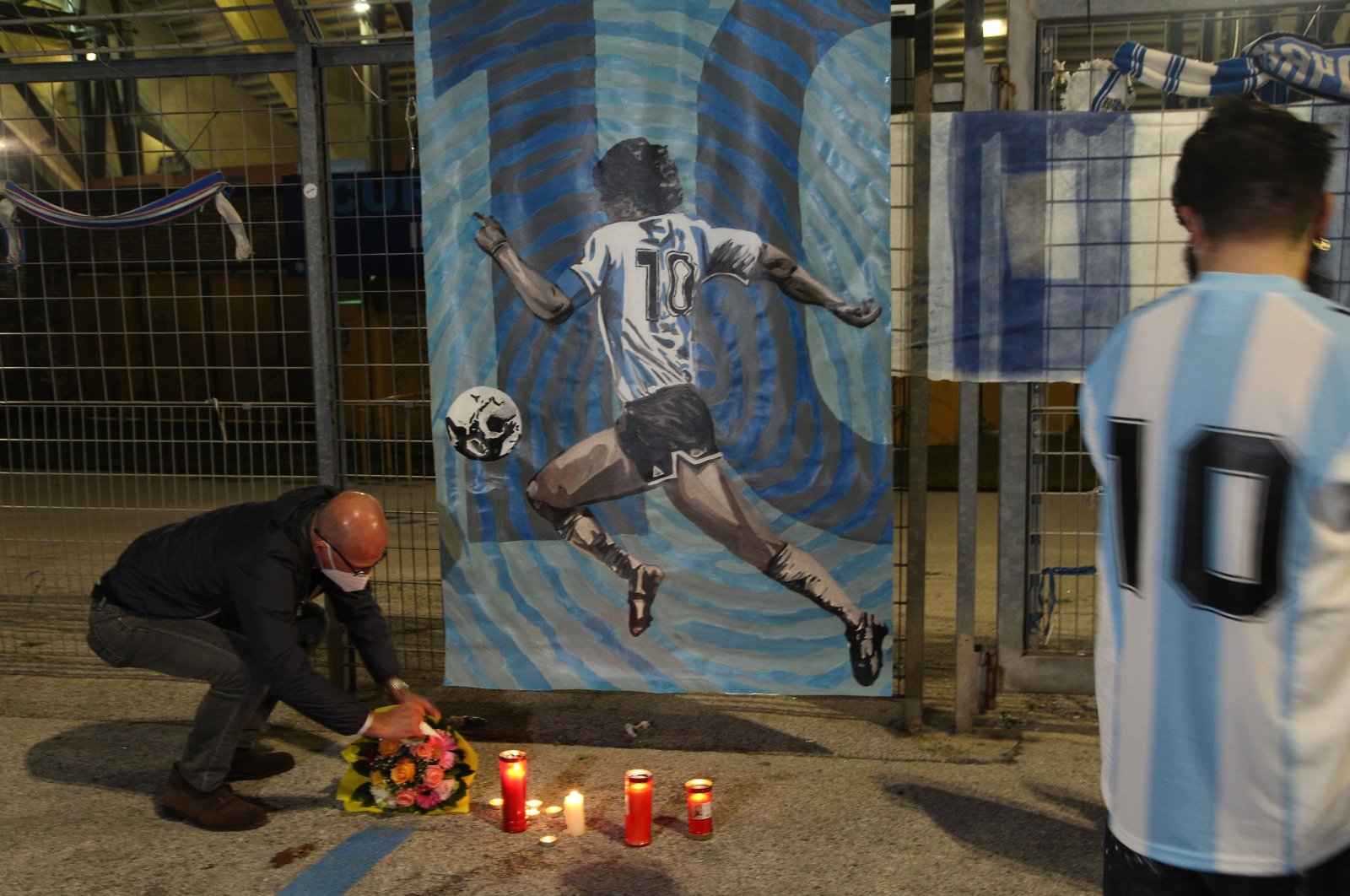 The world continued to mourn the death of Diego Armando Maradona on Thursday as tributes continued to pour in for the late football legend, while Argentine fans wept for their superhero.

The shocking news that sent ripples across the sports world came Wednesday when Maradona was announced dead. His passing came two weeks after being released from a hospital in Buenos Aires following brain surgery.

According to Maradona's spokesperson, the 60-year-old legend died due to a heart attack.

Family members were summoned to Maradona's home north of Buenos Aires before his death was announced, triggering an outpouring of grief across the country and worldwide.

Thousands of fans, many in tears, and many wearing the World Cup-winner's number 10 Argentina jersey, gathered in streets and at stadiums around Buenos Aires in a spontaneous celebration of the player and manager's riotous life.

"You took us to the top of the world," Argentine President Alfredo Fernandez said on social media.

"You made us incredibly happy. You were the greatest of all," he wrote as he announced three days of national mourning.

Brazilian legend Pele, who was constantly compared with Maradona in the debate over football's greatest player, called him a "dear friend" and said he hoped they would "play together in the sky" one day.

"I have lost a dear friend, and the world has lost a legend. One day, I hope, we will play football together in the sky," the 80-year-old said.

The sadness across Argentina was articulated by one of the few players who come close to matching Maradona's artistry with the ball.

"He leaves us," Argentine forward Lionel Messi said, "but he is not gone because Diego is eternal."

The 33-year-old Messi still strives to emulate his hero by winning a World Cup with Argentina, a triumph that could settle the 21st century's version of the Maradona-Pele debate as he duels with Cristiano Ronaldo for football greatness.

Ronaldo, who has won five FIFA player of the year awards to Messi's six, remembered Maradona as an "eternal genius."

"One of the best ever," the Portugal and Juventus forward said. "An unrivaled magician. He departs too soon but leaves a legacy with no limits and an emptiness that will never be filled."

Maradona was undoubtedly a flawed genius, who reveled in the darker side of his character. Beyond the bans for drugs – including being sent home from the 1994 World Cup – there was a sense of pride at outwitting the referee by punching the ball into the net as Argentina beat England before going on to win the 1986 FIFA tournament. He would later name his goal "the Hand of God."

He also mesmerized with his feet minutes later in the quarterfinal, picking up the ball around the halfway line before using dribbles and feints to breeze past Englishmen to score one the greatest-ever individual goals.

But it was the moment of infamy, four years after Britain reclaimed the Falkland Islands following a 1982 invasion by Argentina, that was recalled by former England striker Gary Lineker.

"By some distance the best player of my generation and arguably the greatest of all time," said Lineker, the top scorer at the 1986 World Cup who followed Maradona in joining Barcelona. "After a blessed but troubled life, hopefully he'll finally find some comfort in the hands of God."

Vatican spokesman Matteo Bruni said that the pope had been praying for Maradona in recent days and now "thinks back fondly to the times they met in these years."

In the southern Italian city of Naples, thousands poured into the streets to honor the player who inspired Napoli to its only Serie A titles in 1987 and 1990, even though gatherings are banned due to the coronavirus pandemic. Candles were lit near huge murals of the superstar that cover the sides of buildings.

The mayor proposed that the city's San Paolo Stadium be renamed for Maradona – and ordered the stadium's lights be turned on all night.

Across Europe, Wednesday's eight Champions League games were preceded by a minute's silence.

"He made world football better," Pep Guardiola, a former Barcelona player and coach, said after leading Manchester City to victory at Olympiakos. "I was a little boy with my dad and sometimes coming to Barcelona to see Maradona play and that was incredible."

"Diego may be eternal now, but for forever, Diego will also have a most prominent place in the incredible story of all football fairytales," Infantino said.

"It was one of the thrills of my life when I got to meet him," Los Angeles Lakers great Magic Johnson wrote on Instagram, alongside a photo of him hugging Maradona.

"They used to compare the two of us," Tyson tweeted. "He was one of my heroes and a friend."