Matchday tributes pour in for Maradona across globe 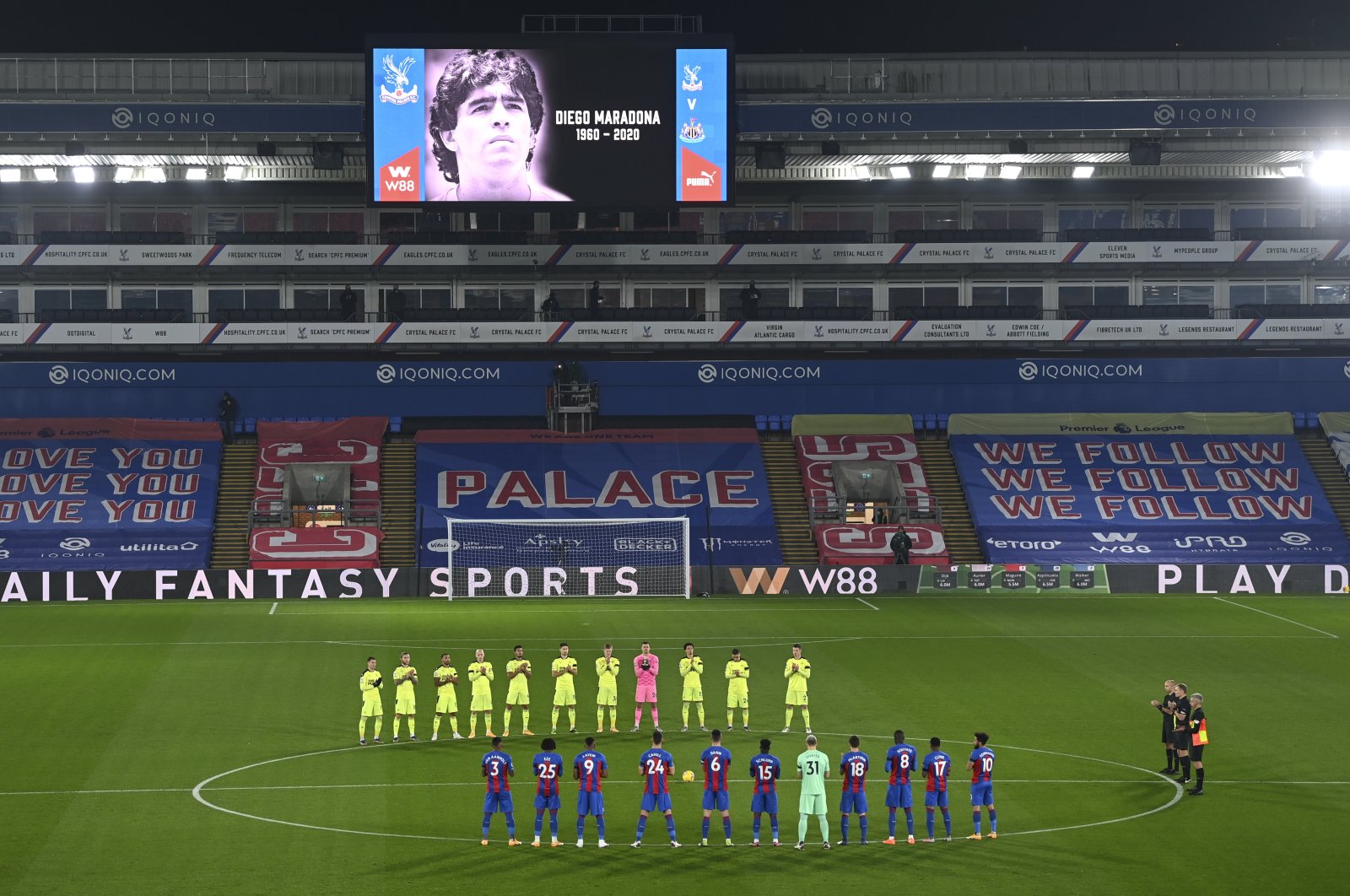 Players applaud as a mark of respect for Diego Maradona ahead of the Premier League match between Crystal Palace and Newcastle United, in London, Britain, Nov. 27, 2020. (AP Photo)
by Associated Press
Nov 29, 2020 11:18 am

Across the globe, teams paid tribute to Diego Maradona throughout the weekend with moments of silence before European football games and a touching gesture from New Zealand's rugby team.

The death of the Argentine great was still being felt days after he had a heart attack at the age of 60 outside Buenos Aires, where he had been recovering from a brain operation.

Manchester City and Burnley players and coaches stood and applauded as a video showed Maradona’s famous solo run and goal for Argentina against England in the quarterfinals of the 1986 World Cup. The “Hand of God” goal was earlier in the game.

“This week, we lost a true footballing great. Diego Maradona was everything football should be: expressive, exciting, attacking and free,” City manager Pep Guardiola said in the team's matchday program.

“A unique, once-in-a-generation player who brought joy to so many people,” he added. “Football will never forget Diego.”

City and Burnley players warmed up to the song “Live is Life” by Austrian band Opus. That's the tune Maradona warmed up to before one of Napoli's UEFA matches in 1989. The players went through their usual routine as the Etihad Stadium loudspeakers played the song.

Everton manager Carlo Ancelotti struggled to hold his emotions together. He made the sign of the cross and kissed his finger after a tribute before their match against Leeds. Ancelotti played against Maradona during their time in Serie A and later went on to manage Napoli.

Maradona led Napoli to its only two Serie A titles in 1987 and 1990 and is considered an icon in the southern city.

In Valencia, Spain, Atlético Madrid coach Diego Simeone was moved by the pre-match homage to Maradona, his former Argentina teammate.

“I believed it was important to say one final goodbye by applauding him,” Simeone said.

Tributes were ongoing across Serie A this weekend. The warmup song was being broadcast in Italian stadiums.

All Serie A players were taking the field wearing a black armband, and a minute’s silence was being observed before each kickoff, with players lined up around the center circle.

The Italian league is also holding a minute's silence, projecting an image of Maradona on stadium screens, and highlighting the message “Ciao Diego” on the stands – which, like most stadiums in Europe, are empty because of coronavirus restrictions.

At the 10th minute of each Italian match, an image of Maradona was being projected again, in honor of his jersey number.

Napoli hosts Roma on Sunday. Thousands of Napoli supporters made a pilgrimage to San Paolo Stadium on Thursday to light a candle, leave a scarf or a shirt and shed some tears in memory of their hero.

Across the Bundesliga, teams stood for a moment's silence and images of Maradona were shown on stadium screens, including one of the Argentine raising the World Cup trophy in 1986 when they beat West Germany in the final.

Santos, the former club of Pele, changed the No. 10 shirt currently worn by Yeferson Soteldo so it bore Maradona's name on the back for the Brazilian championship game against Sport Recife.

The tributes weren't limited to football.

Before their rugby Tri Nations test against Argentina, New Zealand captain Sam Cane presented an All Blacks jersey with Maradona's name and number 10.

As the All Blacks lined up to perform their haka, Cane walked toward midfield and laid down the jersey as the Argentina players stood arm-in-arm and watched.

“It was a gesture, a token, of paying our respects to an Argentine legend, a world legend in his field as well,” Cane said after the match, which New Zealand won 38-0.

Several Argentine players nodded in acknowledgment of the gesture.

“He’s been a huge inspiration for all of us: Players, coaches, the people of Argentina."