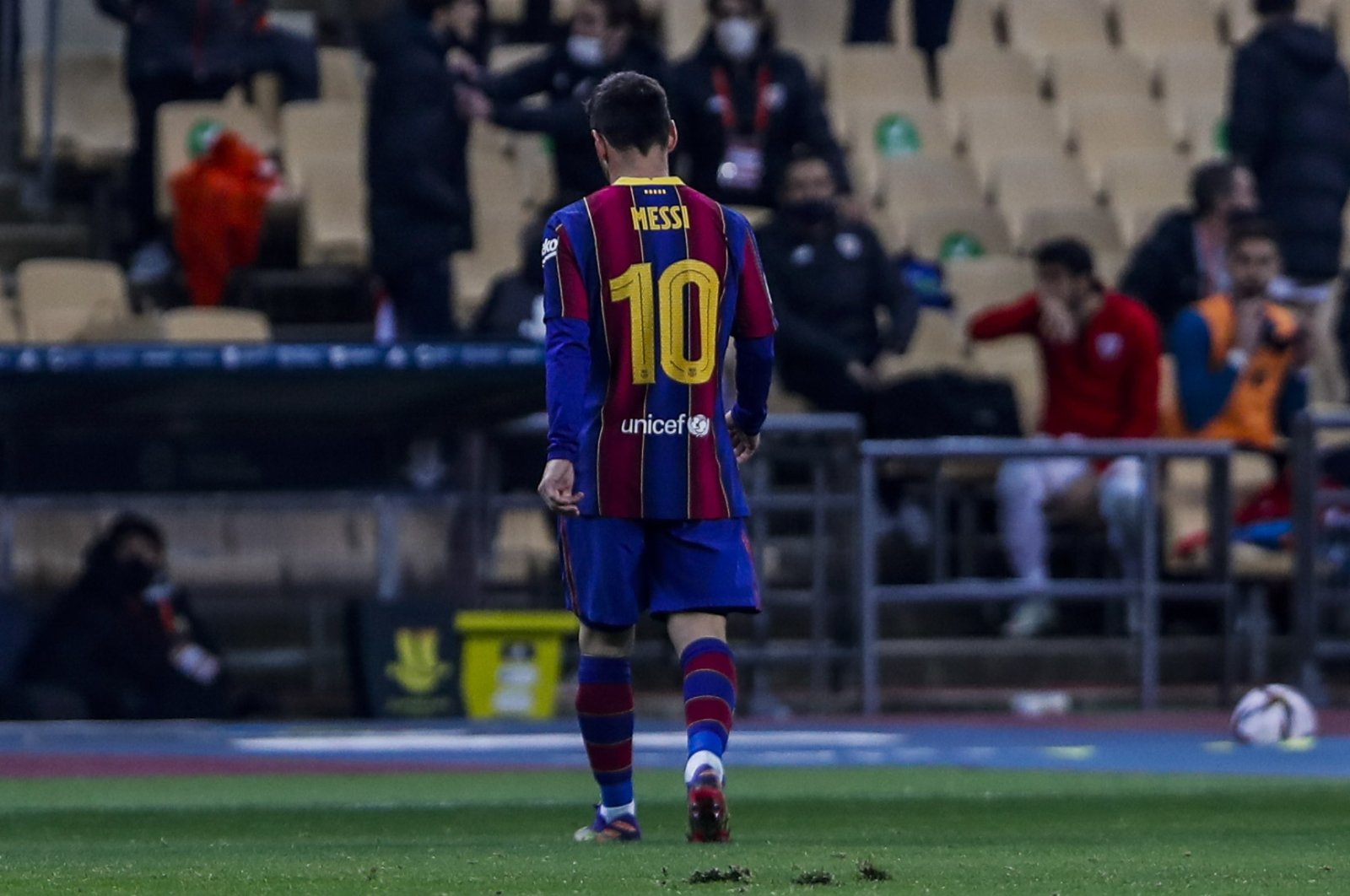 Barcelona's Lionel Messi walks out of the pitch after being sent off during the Spanish Super Cup final against Athletic Bilbao at La Cartuja Stadium, Seville, Spain, Jan. 17, 2021. (AP Photo)
by ASSOCIATED PRESS Jan 19, 2021 4:40 pm
RECOMMENDED

Lionel Messi was suspended for two matches on Tuesday after hitting an opponent in an incident away from the ball in the Spanish Super Cup final.

The Barcelona forward was facing a suspension of up to 12 matches for swinging his arm at an Athletic Bilbao player at the end of the team's 3-2 loss on Sunday. The Spanish soccer federation’s competition committee did not deem the incident to be too serious and applied a less severe penalty.

After passing the ball out to the left flank, Messi swung his right arm at the head of Athletic forward Asier Villalibre as they ran toward the box. Villalibre immediately fell to the ground and after a video review, Messi was given his first red card in 753 appearances with Barcelona's main squad.

Messi had been sent off twice while playing for Argentina’s national team, including a few seconds into his debut in a friendly against Hungary in 2005. The other time was in the 2019 Copa America in a match against Chile. He was also sent off once while playing for Barcelona’s “B” team.

Referee Gil Manzano said in his match report that Messi hit his opponent with “excessive force” while the ball was not near him.

Messi will miss Barcelona's match against third-division club Cornellà in the Copa del Rey and against Elche in the Spanish league. He was already expected to miss the game against Cornellà with coach Ronald Koeman trying to keep Messi's minutes under control to avoid serious injury.

Messi had been doubtful to play in the Spanish Super Cup final because of an unspecified fitness issue that had caused Koeman to leave him out of the semifinal match against Real Sociedad on Wednesday, when Barcelona prevailed in a penalty shootout.

Messi, who asked to leave the club in the offseason but had his request denied, is having an average season compared to previous years, having scored 14 goals in 22 matches. He was far from his best on Sunday despite helping set up the team’s first goal.