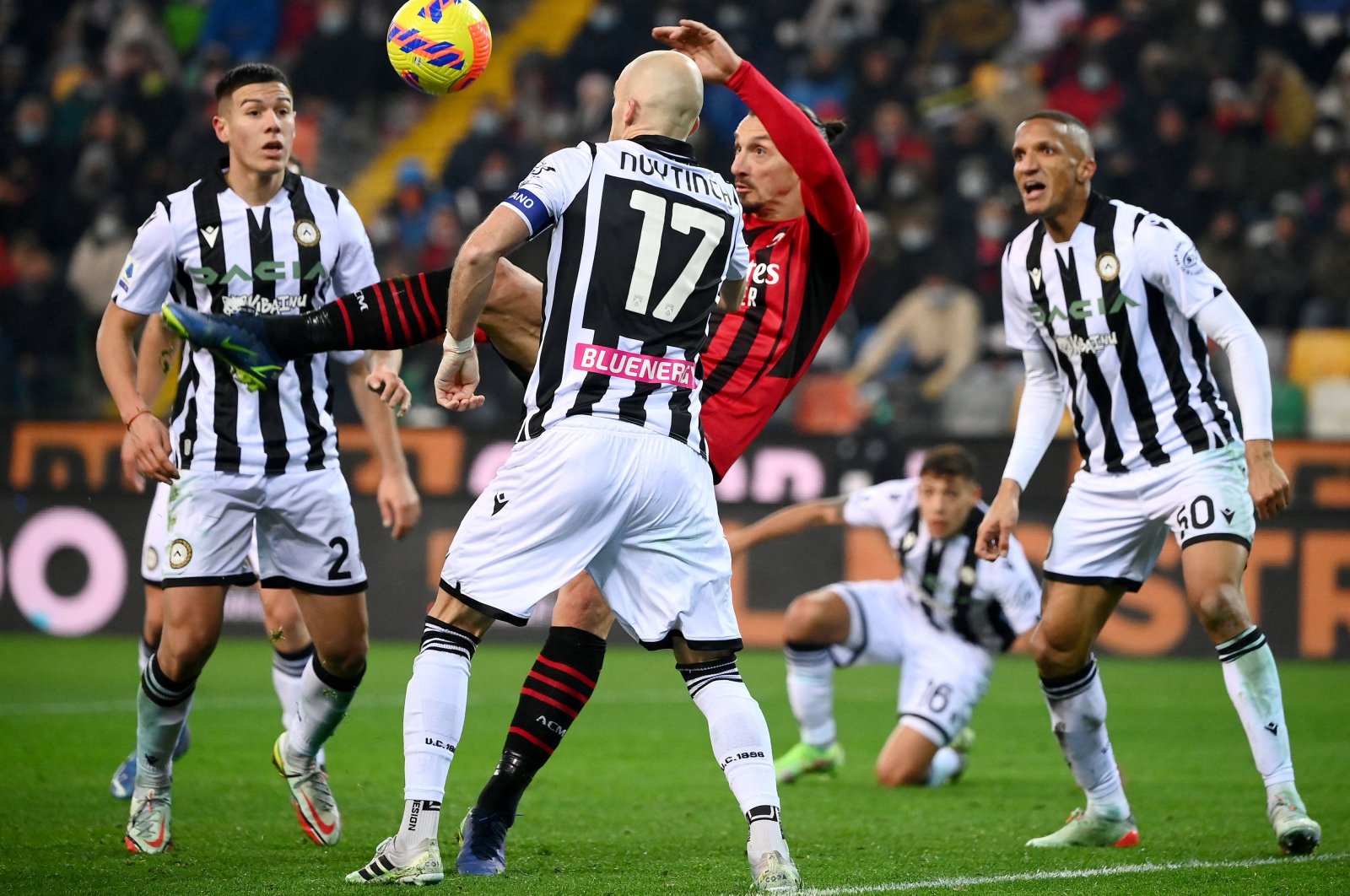 Zlatan Ibrahimovic struck a milestone goal in the stoppage time to help AC Milan rescue a 1-1 draw against Udinese while fallen giant Juventus continued to struggle in a 1-1 stalemate against Venezia on Saturday.

Ibrahimovic's acrobatic effort in the 92nd minute helped the Swede become the third player to score 300 goals in the top-five European leagues since the turn of the century, after Cristiano Ronaldo and Lionel Messi.

It was enough to claim a point for the Rossoneri but Inter Milan, who is two points behind its local rival in second, will end the weekend in the first place if it can beat struggling Cagliari at the San Siro on Sunday.

Napoli is a further point back and can move level on 39 points with Milan before Inter kick off with a win over Empoli in Naples, with some of its key players including Andre-Frank Zambo Anguissa and Lorenzo Insigne back in the squad.

Also waiting in the wings is Atalanta, who sits fourth but is only five points behind Milan ahead of its trip to Verona on Sunday afternoon.

Milan is in the midst of an injury crisis, with starting center back Simon Kjaer out long-term and forwards Olivier Giroud, Rafael Leao and Ante Rebic all sidelined, and it was another low-key display after being dumped out of Europe by Liverpool midweek.

Beto put the hosts in a 17th-minute lead in Gabriele Cioffi's first match as Udinese's caretaker boss when he bundled home on the rebound after Mike Maignan saved his first effort when clean through on goal.

Beto could easily have sealed the points for Udinese in the closing stages when he slipped a close-range finish just wide, and Ibrahimovic got something from the game for his underwhelming team when he took Daniel Maldini's knockdown and thrashed home a barely deserved leveler.

The 26-year-old's fifth goal of the season, which equalized Alvaro Morata's 32nd-minute opener, moved Venezia six points away from the relegation zone, a great response after throwing away a three-goal lead to lose to rival Verona last week.

Juve meanwhile is sixth after being leapfrogged by Fiorentina – 4-0 winners over Salernitana earlier in the day – and is six points behind Atalanta, who sits in the final Champions League spot.

Matters were made worse for Juve by the early loss of Paulo Dybala to injury, the latest of a series of niggling problems for the Argentine.

The 28-year-old, who was substituted at halftime of Juve's 1-0 win over Malmo on Wednesday, limped off the field in the 12th minute and after being replaced by Kaio Jorge was seen with a bandage around his right knee.

"I'm worried, we risked it a bit," said Allegri to DAZN.

"On Wednesday he left the field with a slight muscle problem. We thought he was OK but instead, that wasn't the case."

Dusan Vlahovic is two goals clear at the top of the scoring charts in Italy after taking his tally this season to 15 with a brace against Salernitana.

Serbia forward Vlahovic lashed home Fiorentina's second five minutes after halftime and tapped in Riccardo Sottil's low cross six minutes from the end in a thumping win at the Stadio Artemio Franchi in which Giacomo Bonaventura and Youssef Maleh scored the other goals.

Vlahovic, 21, has now scored 32 Serie A goals in 2021 and is leading Fiorentina to what looks to be its best season in years.

He had been barracked by supporters earlier in the season after refusing to sign an extension to his current contract which expires in the summer of 2023 but seven goals in his last five matches have brought the crowd in Florence back on his side.