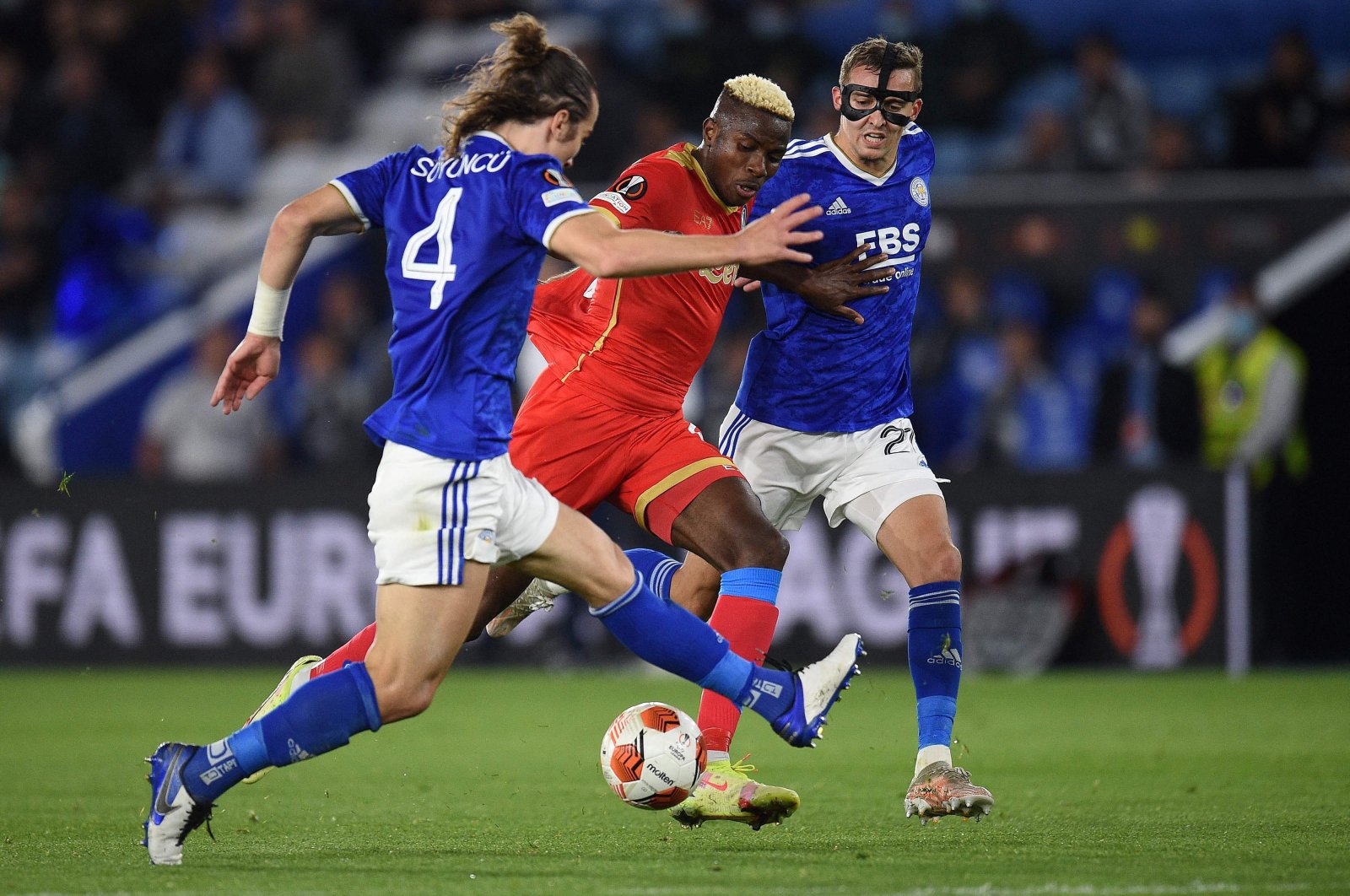 Serie A powerhouse Napoli rode on a Victor Osimhen brace to fight back from 2-0 down to rescue a 2-2 draw at Premier League's Leicester on the opening night of the Europa League group stages Thursday.

Earlier, Celtic threw away a two-goal lead to lose 4-3 to Real Betis and West Ham was convincing 2-0 winner away to Dinamo Zagreb. Ligue 1's Lyon, in the meantime, cruised to a 2-0 win at Rangers.

Leicester just missed out on Champions League football for a second consecutive season as it finished fifth in the Premier League last term.

But the Foxes are keen to go further than their run to the last 32 of the Europa League last season and got off to a great start against the Italian giants.

Ayoze Perez fired home at the back post from Harvey Barnes' cross after just nine minutes.

Patson Daka then saw his first Leicester goal ruled out by a VAR review for a marginal offside call, but Barnes quickly put that disappointment behind Brendan Rodgers' men with an excellent finish to double Leicester's lead.

Napoli boss Luciano Spalletti held nothing in reserve with his strongest side and the visitors responded in the final quarter thanks to Osimhen.

The Nigerian, who cost 70 million euros ($83 million) from Lille last year, brilliantly flicked the ball over the imposing presence of Jannik Vestergaard and Kasper Schmeichel to get Napoli back in the game.

Osimhen then outjumped Çağlar Söyüncü to power home a head for a deserved equalizer.

"The crime isn't giving away the two goals, the crime is if you don't learn from it," said Rodgers. "I'm sure that is something this young team will do."

Toko Ekambi curled home from long range to open the scoring midway through the first half and a goalmouth scramble early in the second period ended with the ball ricocheting off Rangers captain James Tavernier into his own net.

"At the domestic level you can sometimes give the ball away in certain areas but not at this level in the Europa League," said Gerrard after Rangers were outclassed by the French side.

Celtic returned to Seville 18 years on from reaching the UEFA Cup final and got off to a dream start at the Benito Villamarin.

Albian Ajeti bundled home the opener thanks to a VAR review after the goal had initially been ruled out for handball before Josip Juranovic buried his first Celtic goal from the penalty spot.

Iglesias completed the comeback with a near-post flick early in the second half before Juanmi's shot flew in off the inside of the box.

Anthony Ralston pulled a goal back three minutes from time to give Celtic some hope, but Betis held on for all three points.

"We had our moments in the game where it could have got away from them and unfortunately we didn't do that," said Postecoglou. "They have some quality up-front that punished us."

Bayer Leverkusen was also another winner in Group G as the Germans came from behind to beat Ferencvaros 2-1 thanks to a second-half winner from 18-year-old star Florian Wirtz.

West Ham enjoyed a far more comfortable return to European football in the Croatian capital that had manager David Moyes dreaming of how far they can go.

"I'm really excited about the prospect of slightly not knowing how good they could be. We brought in some new players tonight and didn't look any the worse for it," said Moyes.

"It's only one game, but the players are in a good place."

Michail Antonio pounced off a slack-back pass to continue his early-season scoring streak with his fifth goal in as many games.

Declan Rice then galloped from inside his own half before producing a powerful finish five minutes into the second half.