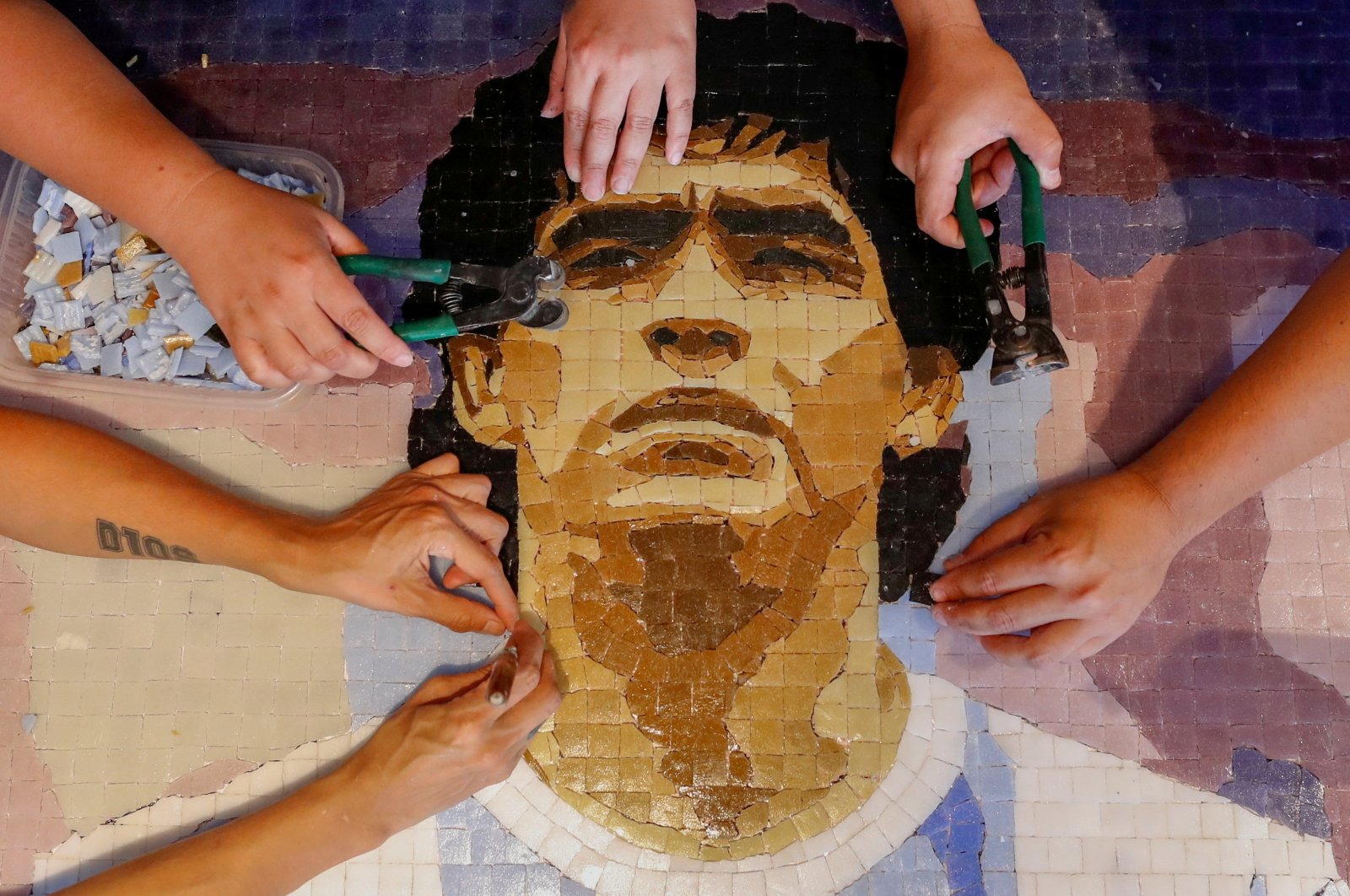 Members of the cultural organization Comando Maradona, prepare a mosaic as a homage to late Argentine football icon Diego Armando Maradona, at their workshop in Buenos Aires, Argentina Feb. 24, 2021. (Reuters Photo)
by Agencies May 04, 2021 2:05 pm
RECOMMENDED

Prosecutors in Argentina on Tuesday received a medical report that found irregularities in the untimely death of football legend Diego Maradona.

The report said the Argentine football icon received inadequate medical care and was left to his fate for a "prolonged, agonizing period," before he succumbed to a heart attack on Nov. 25 at the age of 60.

The 70-page document added that Maradona "started to die at least 12 hours before" the moment he was found dead in his bed and could still be alive if he had been properly hospitalized.

Maradona died of a heart attack at a rented residence outside Buenos Aires following a Nov. 3 brain operation for a blood clot.

A medical panel of 20 experts, convened by Argentina's public prosecutor to examine the cause of death and to determine if there had been any negligence, worked for two months on the report that was made public earlier Friday.

The document further complicates the defense of seven people under investigation in the case, including brain surgeon Leopoldo Luque and psychiatrist Agustina Cosachov, both of whom worked for Maradona.

Julio Rivas, a lawyer for Luque, said he will try to annul the medical forensics of the report

"They have made a biased report, a bad one, with no scientific foundation,” he said.

The finding could result in a case of wrongful death, and a prison sentence of up to 15 years if convicted.

The legal proceedings were prompted by a complaint filed by two of Maradona's five daughters against Luque, whom they blamed for their father's deteriorating condition after the brain operation.

Maradona had battled cocaine and alcohol addictions during his life.

He was suffering from liver, kidney and cardiovascular disorders when he died.

Two of the football great's daughters have accused Luque of responsibility in Maradona's deteriorating health.

The panel concluded that Maradona "would have had a better chance of survival" with adequate treatment in an appropriate medical facility.

He died in his bed in a rented house in an exclusive Buenos Aires neighborhood, where he was receiving home care.

Maradona did not have "full use of his mental faculties" and should not have been left to decide where he would be treated, the experts said.

They also found that his treatment was rife with "deficiencies and irregularities" and the medical team had left his survival "to fate".

Sebastian Sanchi, a former spokesman for Maradona, told the Agence France-Presse (AFP), "it is clear that the panel says that things were not done right."

Maradona is an idol to millions of Argentines after he inspired the South American country to only its second World Cup triumph in 1986.

An attacking midfielder who spent two years with Spanish giants Barcelona, he is also loved in Naples where he helped Napoli win the only two Serie A titles in the club's history.