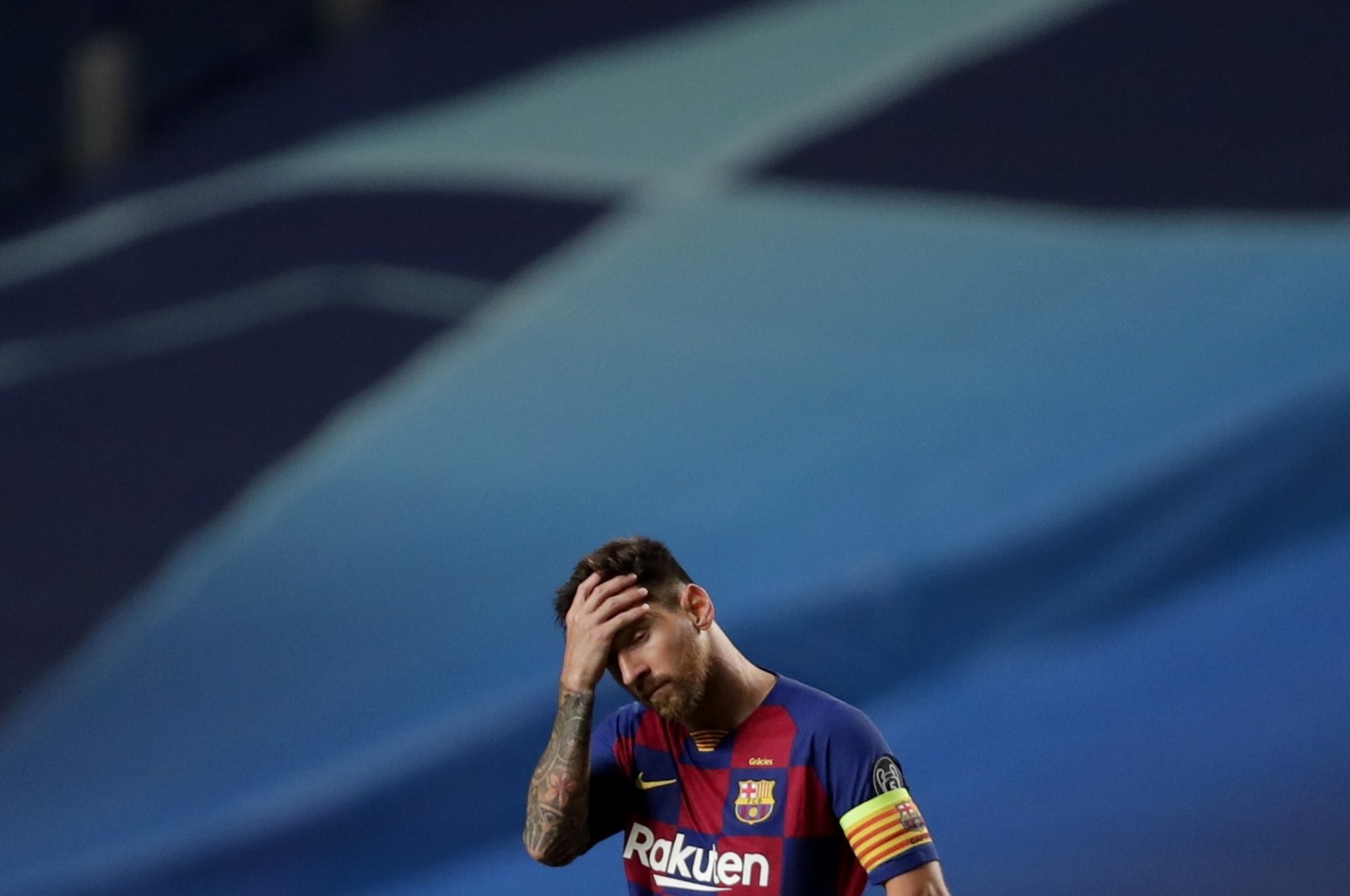 After Bayern Munich threw Barcelona into disarray with a historic defeat in the Champions League, questions were raised over the future of Messi, who has voiced frequent criticisms of his club this season

After firing its coach Quique Setien and sports director Eric Abidal amid one of the worst crises in its history, Barcelona announced the appointment of Ronald Koeman as its head coach on Wednesday.

Promising “wide-ranging” and “profound” structural changes after one of its most humiliating defeats ever – the 8-2 loss to Bayern Munich in the quarterfinals of the Champions League on Friday – Barcelona may even have a new president next year.

But the big question that remains is whether it will be able to keep Lionel Messi.

The team’s biggest star for more than a decade has a contract with Barcelona until 2021, but he hasn’t been hiding his dissatisfaction with the club.

Messi has been more outspoken than ever this season, talking about the team’s problems and pointing to poor decisions by club directors. Although he has never really hinted about leaving, his recent actions have raised doubts about his future.

Spanish media has reported that negotiations to extend Messi's contract beyond next June have been on hold since the problems at the club escalated. One Brazilian outlet, Esporte Interativo, said Messi actually wants to leave now instead of waiting until next year.

Rumors of clubs wanting to sign Messi started to surface immediately after the team’s loss to Bayern, with Pep Guardiola-coached Manchester City reportedly among the front-runners.

“I haven't spoken with Messi but I talked to his father,” Barcelona president Josep Bartomeu told Barca TV on Tuesday. “Messi is disappointed and frustrated, just like everyone else. It was painful but we have to pick ourselves up. It's what we all have to do.”

Many think the humiliation against Bayern may have been the tipping point for the Argentina great. Messi looked like he had already given up at halftime when images showed him sitting at one end of the bench looking down and biting his nails while waiting to go back on the field.

“Football is a game that comes and goes very quickly in your life, so this next two years, where he’s still going to have the power to influence games the way he does, is he going to want to be doing that not really competing for the big titles? I don’t know,” former player Rio Ferdinand said.

Messi and his teammates had to face furious Barcelona fans who confronted them and criticized the team at the club’s training center after the squad returned from Portugal.

Messi has been unusually quiet since the loss in Lisbon and hasn’t made any public statements, unlike after the team lost the Spanish league title to Real Madrid a few weeks ago and he came out to openly talk to the media.

Earlier this season, Messi criticized Barcelona directors for some of their decisions. He was especially upset Abidal after he criticized players’ efforts amid a series of poor results.

Messi had also said that he didn’t think Barcelona would succeed in the Champions League the way things were at the club.

The club is also facing a difficult financial situation because of the coronavirus pandemic, which could make it harder to negotiate with Messi. Still, Barcelona president Josep Bartomeu has always said he expects Messi to finish his career at the club, and that Messi wants the same.

The president reiterated that he was confident the playmaker would remain with the club, especially with former Dutch player Ronald Koeman set to become the team's new coach.

“Messi wants to finish his career with Barcelona, he has said it many times," Bartomeu said. “I spoke with Koeman and he told me that Messi will be the central piece of his project.”

The result of next year’s presidential elections will likely play a crucial role in Messi’s decision, and it will also be important whether he is happy with the work of the team’s new coach.

The 33-year-old Messi is among the aging players within the squad, along with Gerard Piqué, Sergio Busquets, Ivan Rakitic, Arturo Vidal and Jordi Alba. The youngsters touted as promising stars include Ansu Fati and Riqui Puig, though it's too early to know how much they will be able to contribute to the first team in the future.

After the club announced “profound changes to the first team,” many were wondering what that meant for Messi.

Bartomeu was quick to include Messi among the players not up for transfers at the club.

“He is the best player in history,” the president said.