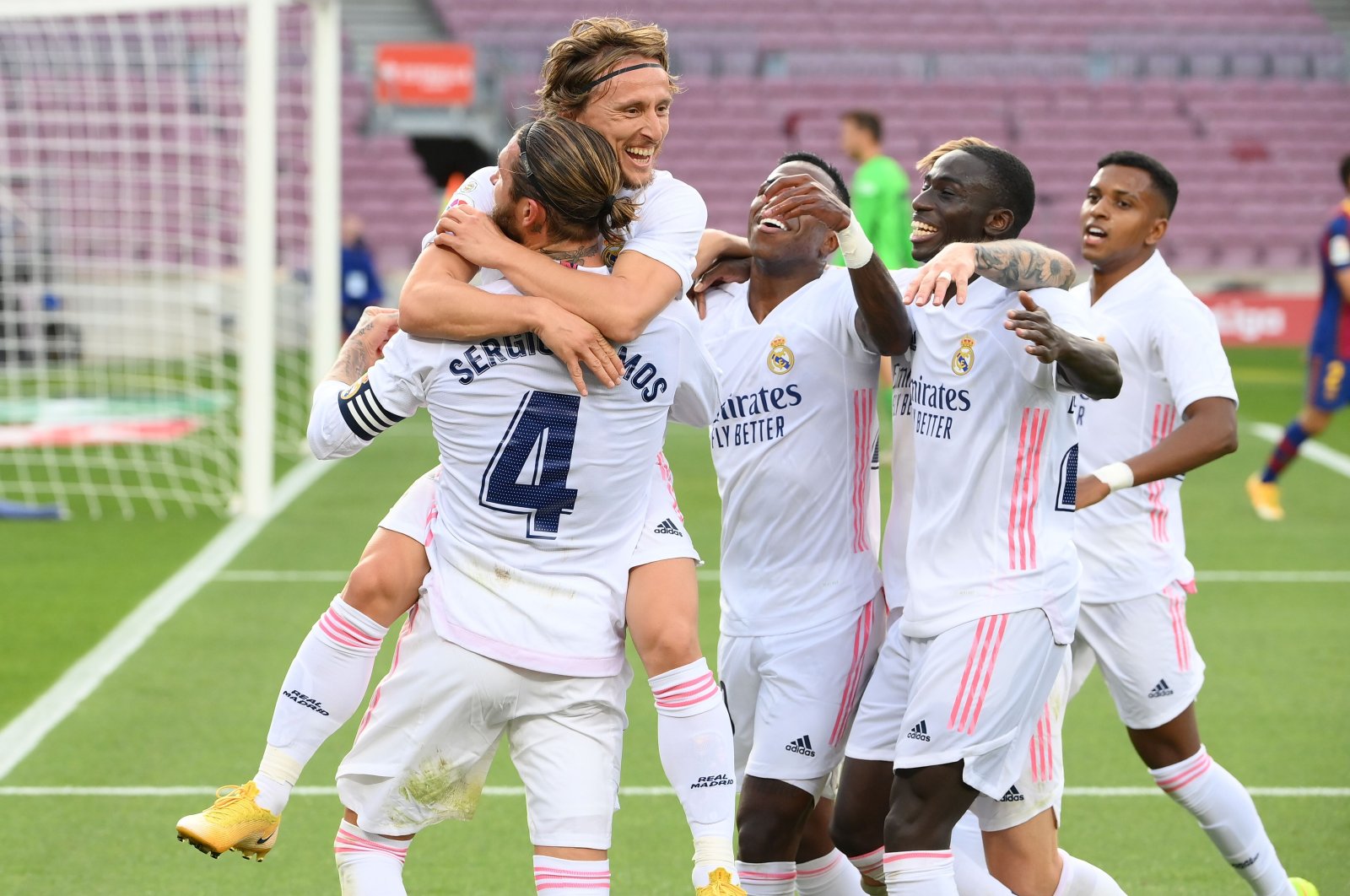 Real Madrid's Croatian midfielder Luka Modric (C) celebrates with teammates after scoring a goal during the Spanish League football match between Barcelona and Real Madrid at the Camp Nou stadium in Barcelona on Oct. 24, 2020. (AFP Photo)
by Agencies
Oct 24, 2020 7:50 pm

Real Madrid averted a crisis in the best possible way on Saturday by beating Barcelona 3-1 in the first empty Clasico, landing an early blow in La Liga's title race.

Barca had the chance to inflict a third consecutive defeat on their rivals and increase the pressure on Zinedine Zidane. Instead, Madrid's win earns them a six-point lead over the Catalans, having played one game more.

Sergio Ramos restored Madrid’s advantage in the 63rd from the spot after a brush with Barcelona’s Clement Lenglet in the area. After consulting the video screen on the touch line, referee Juan Martinez ruled that Lenglet had impeded Ramos from contesting a high ball by grabbing his shirt.

Federico Valverde opened the scoring for Madrid in the fifth minute when he fired in a pass from Karim Benzema.

Barcelona was taking the match to Madrid’s area when Ramos was sent to the spot by the VAR review.

But aside from an impressive spell in the first half, when an inspired Messi threatened to win the game on his own, Madrid were dominant for longer spells and pulled away when it mattered.

Substitute Luka Modric capped the win for Madrid in the 90th with Barcelona searching for an equalizer.

Madrid leads the league with 13 points. Barcelona has 7 with a game in hand.

Gone was the listless Madrid that had been embarrassed in home losses against Cádiz and Shakhtar Donetsk over the previous week, while Barcelona were beaten by Getafe last weekend.

Ramos had been knocked out of the loss Cadiz at halftime with a knee knock that also sidelined him for the Shakhtar defeat in the Champions League.

With him back barking orders in the center of its defense, Madrid was the aggressive, compact side that had won the league from Barcelona last season.

Ramos also proved key in attack when he used his wiles to grapple with Lenglet and then complain vehemently after he collapsed to the turf following the defender’s tug.

"Both Lenglet and I take our defending to the limit, and in this case it was very clear,” Ramos said. "He grabbed me as I was jumping. The VAR is there to help and I think it was a penalty. We then went looking for a third goal after they had suffered that blow to their morale instead of just sitting back.”

Keeper Thibaut Courtois said: "It was not easy playing against Cadiz last weekend after the international break and conceding an early goal we could not get back into the game. We then had a hard game facing Shakhtar in Europe.

"But here we had the intensity that the manager wanted from us. It was a bit back and forth in the second half but we got the penalty and we held out for the win.

"We have to fight in each game when we wear this shirt. Today we did that. This is only three points but it gives us an awful lot of confidence."

Barcelona full back Sergino Dest, making his first appearance in a Clasico and becoming the first American to play in the fixture, said: "I don't know if it was a penalty. They had chances and we had chances but they were may be a bit sharper in their finishing."

It was the first Clasico match played without fans since the Spanish league closed all stadiums to the public after since the start of the coronavirus pandemic.

This was Ronald Koeman's first Clasico as Barcelona coach and some of the pressure Zidane would have felt from a loss is now transferred to the Dutchman, who has overseen only three wins from his first six games in charge.

Barcelona face Juventus on Wednesday in the Champions League, without the suspended Gerard Pique.

Every Barca set-back is now seen through the lens of Messi's future too. The Argentinian, who failed in his attempt to leave last summer, has still to score from open play this season.

Mundo Deportivo had declared the match "The least Clasico of Clasicos" on its front page on Saturday morning.

Yet a dip in quality does not have to mean a drop in drama and any doubts about the thrill of this fixture were answered in eight minutes, as both teams had scored.