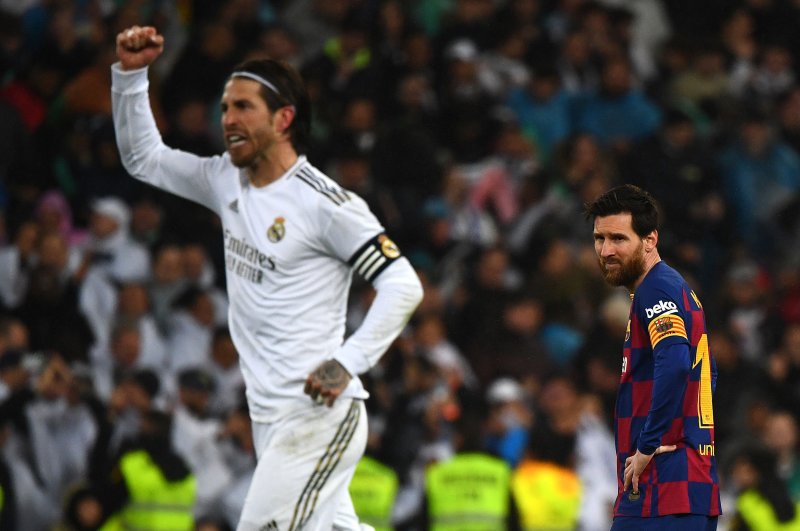 Real Madrid beat Barcelona 2-0 in the “clasico” at the Santiago Bernabeu on Sunday to end its seven-match winless streak against its rival and return to the top of the Spanish league.

Vinicius Junior scored in the 71st minute and substitute Mariano Díaz sealed the victory in stoppage time to give Madrid a one-point lead over Barcelona and halt the team’s recent struggles.

Zinedine Zidane’s Madrid was winless in three straight games in all competitions, and also hadn’t won at home in three consecutive games.

Madrid had lost its last four league games at the Bernabeu against Barcelona, and its last win over the rival in any competition had come back in 2017 in the Spanish Super Cup.

Barcelona looked the most dangerous in the first half but Madrid took control after halftime, opening the scoring after Vinícius Junior found the far corner with a shot from inside the area after a run into the area following a through-ball by Toni Kroos. The ball deflected on Gerard Pique's leg before getting past Barcelona goalkeeper Marc-Andre ter Stegen.

Diaz added the second from inside the area near the end.

Lionel Messi had a quiet night, squandering a couple of good chances on one-on-one situations and being shown a late yellow card for a hard foul from behind on Madrid midfielder Casemiro.

Former Real Madrid forward Cristiano Ronaldo was among the nearly 80,000 in attendance at the Bernabeu, as were players from the Wuhan Zall soccer team based in the Chinese city of Wuhan, the epicenter of the virus coronavirus outbreak. The team arrived in Spain in January for preseason training but still doesn't know when it will be able to return home.

Atletico Madrid's struggles away from home continued with a 1-1 draw at last-place Espanyol, its fourth consecutive winless match as a visitor in the league.

The result dropped Diego Simeone's team to fifth place, outside the Champions League qualification spots. It is one point behind fourth-place Getafe and two behind third-place Sevilla.

Atletico has won only one of its last 10 away matches in the league, with seven draws and two losses. The sole win during that run was against Real Betis in December. It has only two other away wins in the league this season.

“It's been tough for us away from home,” Atletico forward Saul Niguez said. “We have been doing well at home, but we have to find a way to improve in these away matches."

Espanyol, at the bottom of the table with 20 points from 26 matches, opened the scoring with an own-goal by Atletico defender Stefan Savic in the 24th minute. He found his own net while trying to intercept a low cross by Chinese forward Wu Lei.

Niguez equalized for Atletico with a neat volley from outside the area after the ball was cleared from the box shortly after halftime.