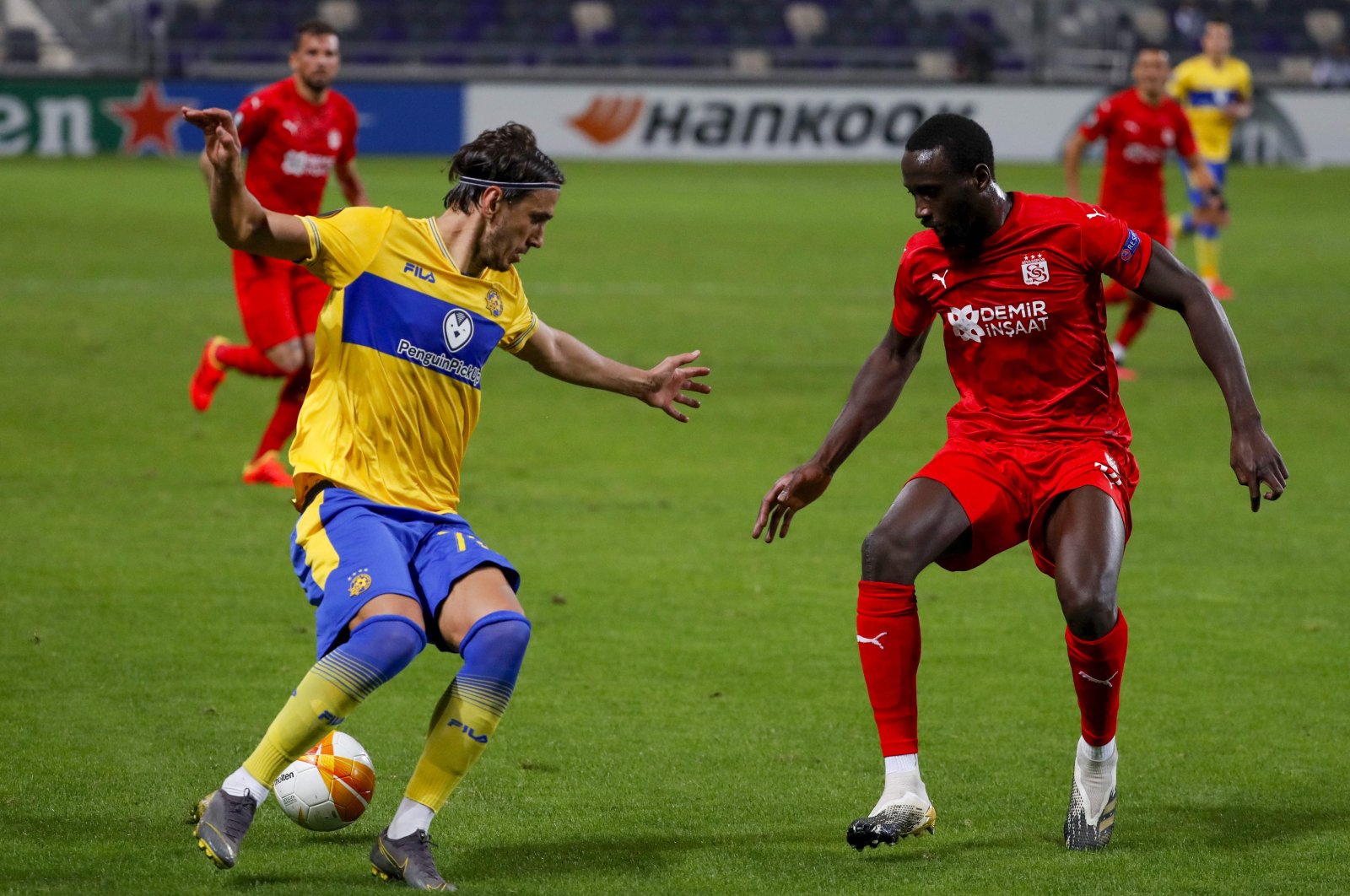 Turkish Süper Lig side Sivasspor was knocked out of Europa League on Thursday after losing 1-0 to Israel's Maccabi Tel Aviv in the last match of the tournament’s group stage.

After a goalless 45 minutes, Enric Saborit broke the deadlock in the second half to seal the win for the home team at Bloomfield Stadium in Tel Aviv.

Saborit weaved through Sivasspor’s defense in the 67th minute to unleash a spectacular finisher from the edge of the box into the top left corner.

Sivasspor took a knee before the match’s start in protest of a racist remark by a referee against Turkish team Başakşehir’s assistant manager Pierre Webo in a Champions League clash Tuesday against Paris Saint-Germain.

Group I’s other match between Villarreal Qarabag was postponed after several players from the Azerbaijani club tested positive for the coronavirus.

It was unclear whether the game would be rescheduled or whether UEFA would award a forfeit win to Villarreal.

Villarreal, which secured the top spot prior to matchday, finished Group I first with 13 points, while Maccabi stood second with 11. Sivasspor finished third with six points, and the Azerbaijani club Qarabag placed fourth with a single point.

The draw for the round of 32 will be held in UEFA's headquarters in Switzerland’s Nyon on Monday.

Meanwhile, a small-scale dispute erupted between Sivasspor officials and Israeli authorities in the early hours of Friday after the Turkish club blamed authorities at Tel Aviv’s Ben Gurion airport of purposefully delaying the team’s flight.

"Our group, preparing to return to Sivas after the Maccabi Tel Aviv match, is stuck in the airport. The Israeli authorities are creating all kinds of difficulties for our group by closing the (check-in) systems and (security) crossings," the team said on its social media account, sharing a video from the airport.

The video shows the group waiting at the airport in Tel Aviv. Mecnun Otyakmaz, the club's chairperson and club officials protested Israeli officers with applause.

"They said the automatic pass system was malfunctioning. They tried to process things manually. There is only one officer," Otyakmaz told Anadolu Agency (AA).

"We've been stuck here for two hours. The treatment has been very uncomfortable," he said, adding they are waiting patiently and calmly.

"We came from the stadium very quickly to let the plane take off early," he added.

Israeli Foreign Ministry spokesperson Lior Haiat said the Sivasspor delegation was held at the airport due to their late arrival.

Haiat told AA that the plane would take off at 5:30 a.m due to a flight ban until 5 a.m. over noise levels.

"The statement on our team's late arrival is completely false. Our group entered the airport ahead of time. Israeli officials are solely responsible for the loss of time," the team said in a separate statement.

"A single officer started carrying out all passport controls of our group of 43 people. When our group reacted to this, the employee slowed down the process. After all passport procedures were finished, our group was put on two separate airport buses to be taken to the plane," it said.

"The buses could reach the plane in just a few minutes. The bus driver stopped the vehicle and waited for a while and did not answer the questions of our group. After all these planned difficulties, our team was put on the plane," it added.