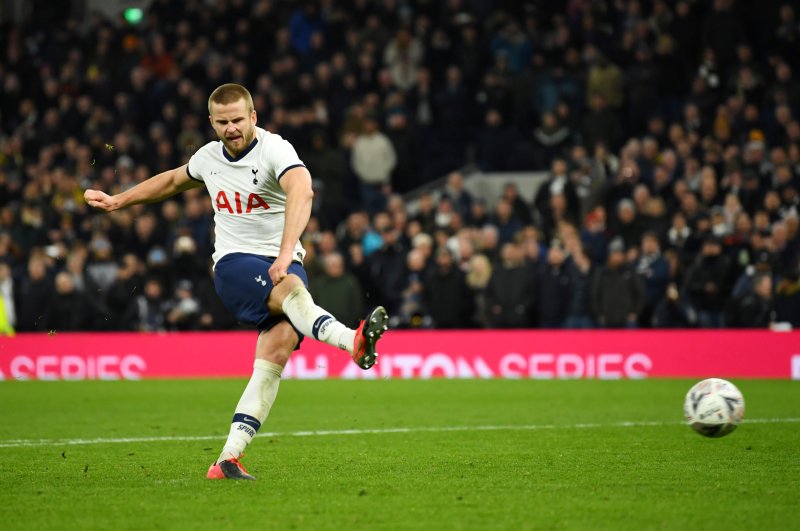 Tottenham Hotspur's Eric Dier scores a penalty during a shootout after the match against Norwich City in London, March 4, 2020. (Reuters Photo)
by REUTERS Mar 05, 2020 10:54 am
RECOMMENDED

Tottenham Hotspur midfielder Eric Dier was involved in a confrontation with a fan after his side's penalty shootout defeat by Norwich City in the fifth round of the FA Cup on Wednesday.

The England international, who scored his spot-kick in the shootout after the match ended 1-1, appeared to be upset at something said after the game and climbed into the stands.

Video footage showed Dier climbing over seats and confronting a home fan before he was restrained by security guards and other fans. He was eventually led away.

It is believed his brother was in the section where the incident happened, and Dier could be heard saying "he's my brother" in video footage posted on social media.

Eric Dier just came into the stand and had a fight with fan next to me pic.twitter.com/nMGVcDWegX

Tottenham manager Jose Mourinho said he had sympathy for Dier but said his actions were wrong.

"I think Eric did what we professionals cannot do but probably every one of us would do when someone insults you and your family is involved, especially your younger brother," he told reporters after his side's fourth successive defeat.

"This person insulted Eric, the younger brother was not happy with the situation, and Eric was not happy. But we as professionals cannot do what he did," Mourinho said.

"But I repeat, probably every one of us would do," he said, adding, "I am with the player and I understand the player."

It is not the first time a player has clashed with a fan this season. Arsenal's Granit Xhaka was stripped of the club captaincy after mouthing an expletive to home fans when substituted in a match against Crystal Palace.

Dier's action is potentially more serious though and could lead to disciplinary action.

It is another worry for Mourinho whose Tottenham side is unraveling after an initial revival when the Portuguese replaced Mauricio Pochettino.

Tottenham's run of defeats includes a 1-0 home loss to RB Leipzig in the Champions League, defeat away to Chelsea and a home loss to Wolverhampton Wanderers over the weekend that left the club in seventh place in the Premier League.

With his leading strikers Harry Kane and Son Heung-min still missing with injuries, Tottenham is fully stretched, and Mourinho again said some of his players were exhausted.

"I am not going to say what everybody knows, so this time I am not going to say that, but I have to say Steven Bergwijn – it's too much for him to play so many minutes like he is doing," Mourinho said. "I prefer to call Lucas (Moura) a hero; he is playing every minute of every game in every position."

"Harry Winks was completely dead. I think he's started 11-12 games in a row. We had many many players in trouble," he said.