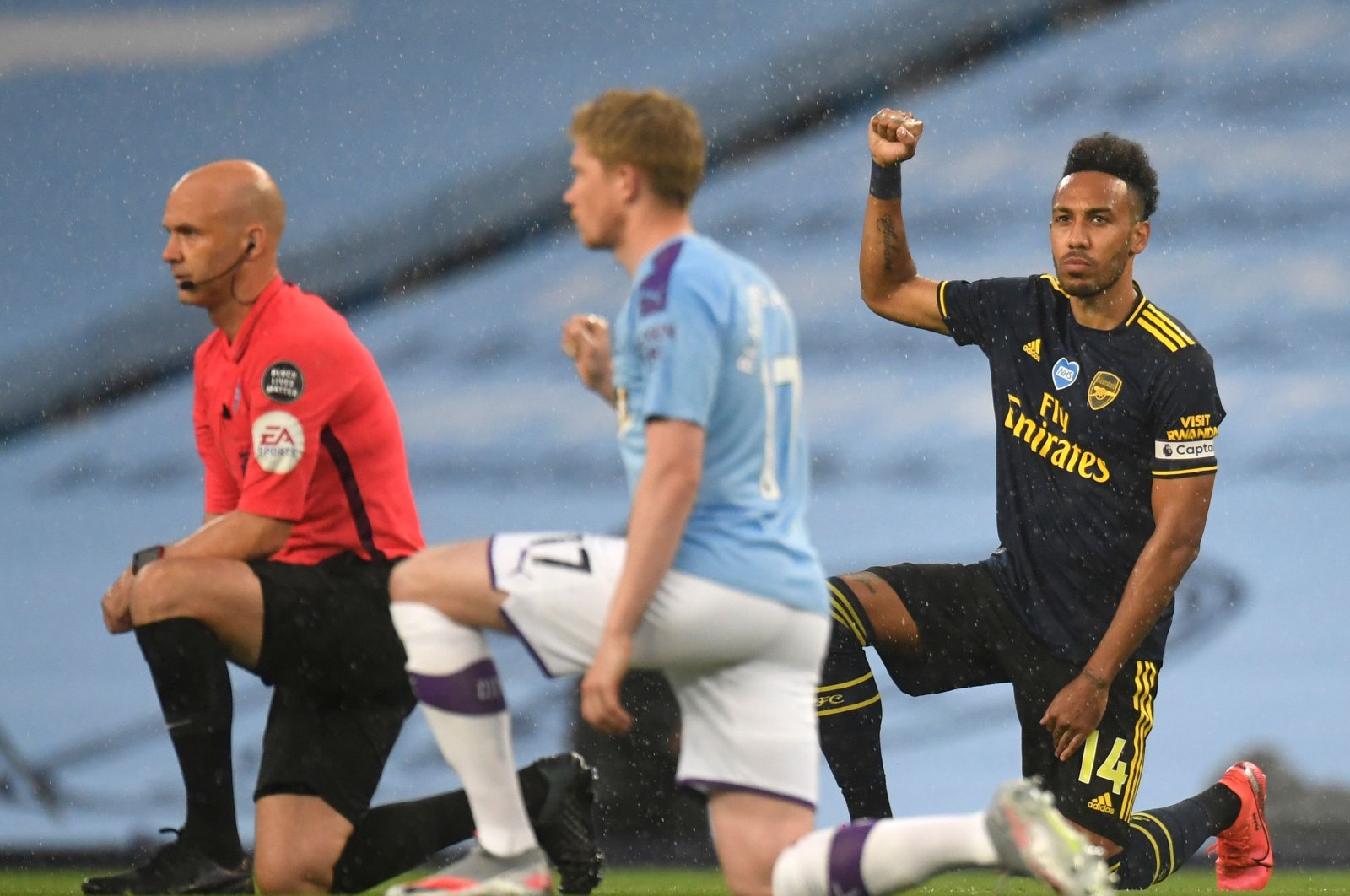 The Premier League resumed on Wednesday after a three-month hiatus, with players taking the knee at the start of a goalless draw between Aston Villa and Sheffield United overshadowed by a goalline controversy.

Coronavirus restrictions mean the 92 games remaining after the 100-day shutdown are being crammed into less than six weeks.

Defeat for Manchester City, who kicked off against Arsenal later on Wednesday, would leave Liverpool on the brink of their first English top-flight title for 30 years.

But Villa and Sheffield took center stage to relaunch the English top-flight.

In front of a huge global audience, players and staff protested racial injustice for about 10 seconds in solidarity with worldwide protests following the death of American George Floyd while in police custody.

"In the first Premier League fixture of Project Restart both clubs hope that the act of 'taking a knee' will send a strong message of unity and amplify the many messages of support from Premier League players and the wider football family," the clubs said in a statement.

Manchester City and Arsenal players also took a knee before kick-off at the Etihad.

All players will wear Black Lives Matter (BLM) on the back of their shirts where names are normally printed for the first 12 matches of the restart.

A BLM logo will feature on shirts for the remainder of the season along with a badge thanking Britain's health workers for their efforts during the COVID-19 pandemic.

The 0-0 draw at Villa Park did not suit either side.

Aston Villa was seeking a precious win to lift it out of the relegation zone while Sheffield United is chasing a European spot next season.

The big talking point came late in the first half when a free kick from United's Oliver Norwood was caught by Villa goalkeeper Orjan Nyland but he stumbled backward and looked to have carried the ball over his own goalline.

United players appealed for the goal, but the technology that alerts the referee when the ball has gone over the line did not award it and VAR did not intervene.

Despite replays showing the ball had clearly crossed the line before Nyland regained his footing, referee Michael Oliver had no choice but to let play continue.

Should Manchester City lose to Arsenal, Jurgen Klopp's Liverpool, who holds a 25-point lead at the top of the table, could be crowned champions as early as Sunday when it faces local rival Everton.

Despite concerns over fans congregating around stadiums, clubs won the battle to host matches in their home grounds.

Liverpool can win a long-awaited title in its own city, either at Goodison or when the Reds host Crystal Palace at Anfield on Wednesday.

But Klopp stressed the need for supporters to stay at home.

"Stay safe, support us from home. We are still with you and you'll never walk alone," he said.

The battle for Champions League places next season and to avoid the drop are far more closely contested.

Matches will be preceded by a minute's silence in memory of those who have died from coronavirus. Britain is the worst-hit country in Europe with more than 42,000 deaths.

Three of the four managers to lead their sides on Wednesday have been touched by the virus.

Guardiola's former assistant Mikel Arteta returns to the Etihad for the first time as Arsenal manager three months after his positive test for coronavirus hastened the season shutdown.

With all games being played behind closed doors, players will have to get used to the eerie silence in the usually raucous stands.

Piping crowd chants into stadiums, cardboard cutouts of supporters and live video fan walls will add color but the Premier League's chief executive Richard Masters admitted there would be something missing without crowds.

"It is going to be an odd experience without fans at the stadia," he said. "The Premier League won't be back with a capital 'B' until fans are back."

Just 300 people will be allowed in stadiums for each match, with strict health protocols in place.

Players have been told to maintain social distancing during goal celebrations and are banned from spitting.