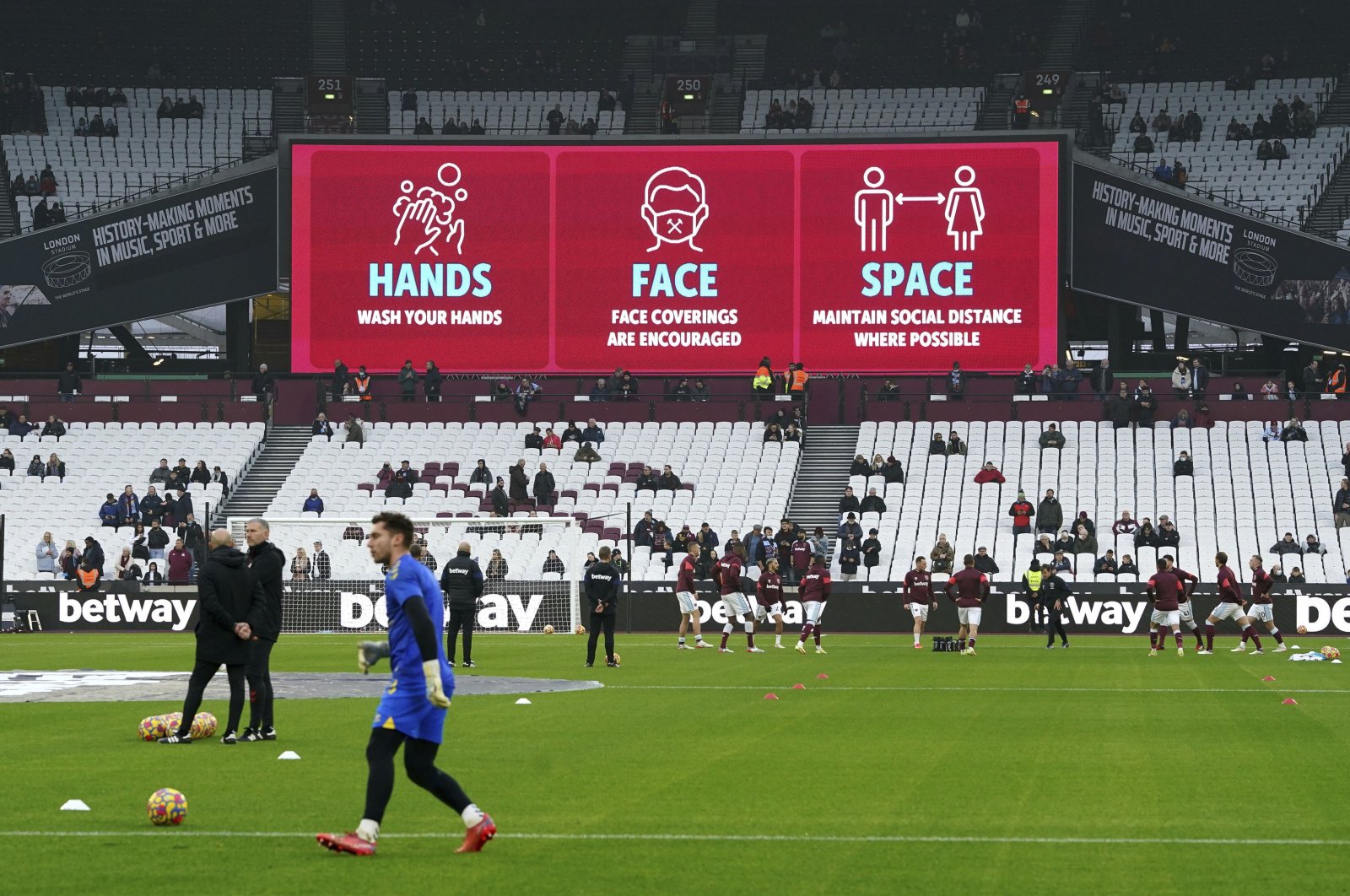 COVID-19 safety signage are seen above the stands before the English Premier League soccer match between West Ham and Southampton, at the London Stadium, U.K., Dec. 26, 2021. (AP Photo)
by Agencies Dec 27, 2021 7:21 pm
RECOMMENDED

A record 103 players and staff have tested positive for the coronavirus in the Premier League over the past week, the league revealed Monday, while managers slammed the fixture pileup and called for the introduction of five substitutions per game to protect athletes.

The statement from the British top-flight comes following a raft of fixture postponements during the busy festive period.

"The league can today confirm that between Monday, Dec. 20 and Sunday, Dec. 26, 15,186 COVID-19 tests were administered on players and club staff. Of these, there were 103 new positive cases," the league said in a statement.

The figure has steadily increased in recent weeks, with 42 cases between Dec. 6-12 and 90 testing positive between Dec. 13-19.

The Premier League has had 15 games postponed so far due to outbreaks at various clubs, leading to a fixture pileup, while a lack of available players has forced those who recovered from COVID-19 to play more minutes.

Watford, who have had three games called off so far, said they had welcomed back players who were previously isolating but added more had tested positive ahead of Tuesday's home game against West Ham United.

Watford manager Claudio Ranieri said he would have to bring in some Under-23 players as they held their first "normal training session" since Dec. 10.

"It's difficult to say if we are ready (and) 100%. When you meet your players for one training session, it's very difficult to do this," Ranieri told reporters.

"There are some players who didn't make some training sessions ... I think these players don't have (what it takes to play) 90 minutes."

Wolverhampton Wanderers, who had Tuesday's trip to Arsenal postponed, said they had six confirmed cases in the first team.

"We hope some of those players will be well enough to return for our game against Manchester United on 3rd January," Wolves said in a statement.

"Our operations team have arranged a deep clean of the Sir Jack Hayward Training Ground to try to prevent further infection."

Separately, Liverpool manager Juergen Klopp reiterated the need for five substitutions in the Premier League to protect players amid a demanding schedule and rising COVID-19 cases but conceded he did not see all clubs agreeing to make a change.

Top-flight leagues in Europe adopted the rule to increase the number of substitutions per game to five to ease the workload on players amid the pandemic but Premier League clubs voted against the motion.

"You need 14 votes to change it – there's something wrong. As an example, I'm not sure how many Burnley players play international football. When our players have three games, they have no game," Klopp told reporters on Monday.

"We are talking about an issue that some clubs and some players definitely have but it's decided by other teams. Because we make a competition of it, they say no. That's a real problem.

"I completely agree that we need five subs. I know I'm (part of) one of the clubs with the lowest budget and probably the thinnest squad, but I still think that will help all of us," Frank said.

"In Italy, I was the first to speak about five changes because it's very important you don't push the players' fitness too much," Ranieri said.

"If they don't train and then they have to play – we are playing now every three days – how is it possible to keep players on the pitch for 90 minutes and I can change only three players?"

However, Tottenham Hotspur manager Antonio Conte said airing their views in a meeting with the league last week was like talking to a wall.