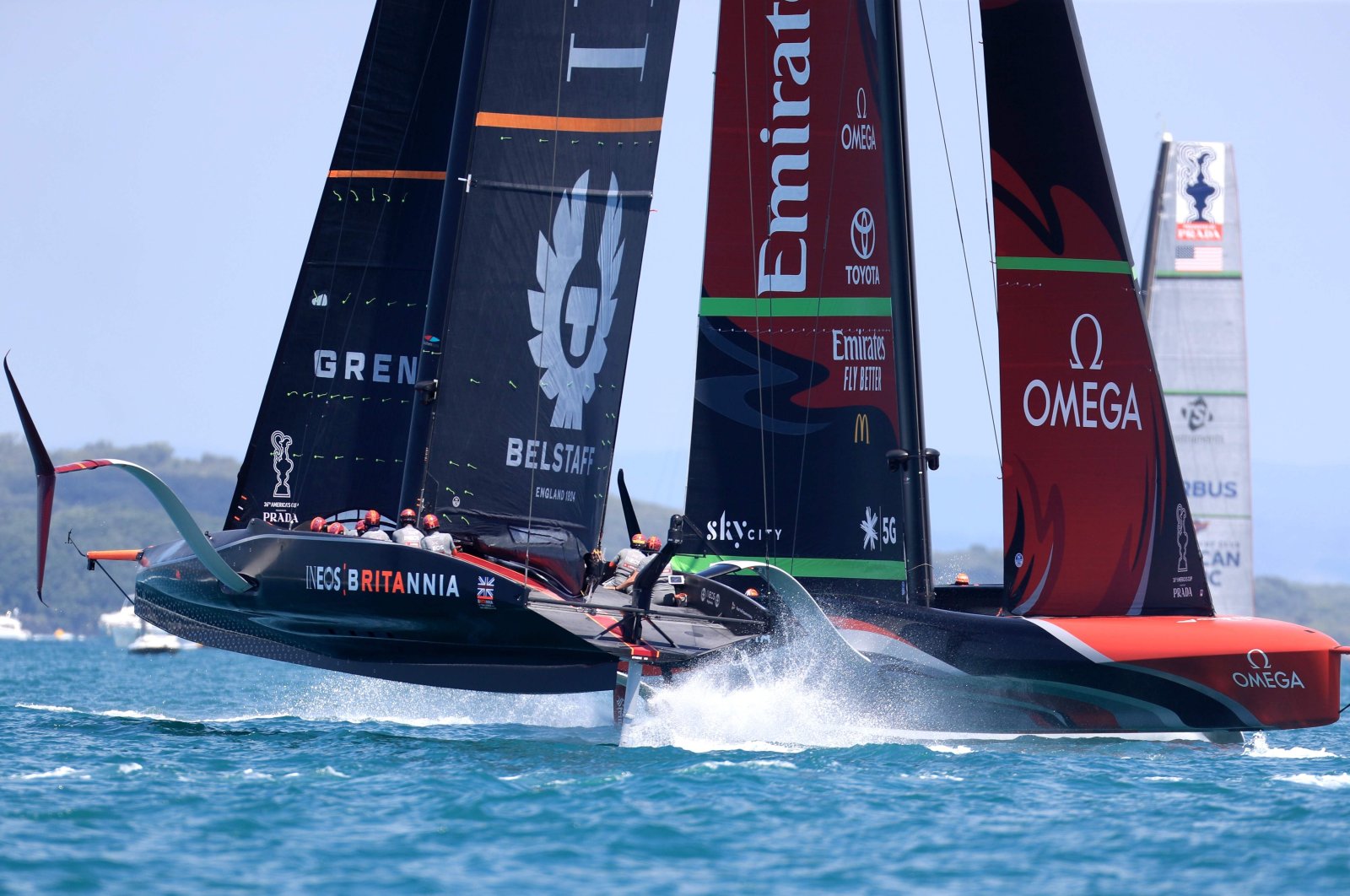 Racing in the Christmas Cup prelude to sailing’s America’s Cup was abandoned Sunday because of a lack of wind on Auckland’s Hauraki Gulf. Only one of four scheduled races – the first semifinal between America’s Cup defender Team New Zealand and British challenger INEOS Team UK – was started in a fading breeze. Team New Zealand was leading by more than a lap, or two legs of the six-leg course, and was within 60 meters of the finish line when the 45-minute time limit elapsed and the race was abandoned. The second semifinal between United States challenger American Magic and Italy’s Luna Rossa could not be started before the time limit for the day’s racing also elapsed, leaving the final and race for third and fourth places uncontested.

The race between Team New Zealand and Team UK had a bizarre finish as the wind faded almost entirely, meaning neither boat was able to stay on its foils. With their hulls in the water, the boats drifted slowly downwind towards the finish line and Team New Zealand couldn’t catch enough of a breeze to finish in the required time. The loss of racing was a small setback to teams who now face a brief lull before America’s Cup proper begins in the New Year.

The America’s Cup World Series which was won on Saturday by Team New Zealand and the Christmas Cup are not part of and don’t count towards the Cup regatta.

Racing over four days was still valuable, giving the defender and three challengers their first opportunity to race against each other in the high-tech AC75 class yachts; to assess the performance of their own boats in race mode and collect race day data on rivals. The challengers now head back to their bases to crunch that data and to make any modifications they deem necessary before the Prada Challengers Series begins on Jan. 15. The series runs to Feb. 22 and the winner will face Team New Zealand in the 36th Cup match, beginning March 6.

The British challenger INEOS Team UK faces the greatest workload in bringing its race boat Britannia up to a competitive level after a disastrous World Series in which it lost all six races, withdrawing from one and suffering numerous technical problems. The World Series proved Britannia struggles to stay on its foils in light winds and major changes may be necessary to improve its performance before the challenger series begins.

Team UK is thought to be the best-funded challenger with around $160 million in financial backing and the technical and equipment issues it has faced have been a major surprise. Skipper Ben Ainslie acknowledged problems with Britannia’s light airs performance but also blamed the team’s technical problems on a system supplied to all teams by Team New Zealand. The hardware and software systems control the canting foil arms and the British team has struggled to make the system work efficiently. Other challengers have also reported problems but have been able to devise solutions. Ainslie, a four-time Olympic sailing gold medalist, said Team UK will take away the lessons of the World Series and Christmas Cup and work hard to overcome its weaknesses. "In terms of understanding why we’re struggling in the lighter airs in particular it was a good learning experience to analyze the other teams, to actually get a proper look for real when they’re racing at what they’re doing, what’s the set-up on their boat, what are we missing and how can we improve our performance,” Ainslie said. The recent racing also seemed to show the Italian boat Luna Rossa is particularly fast in light airs and the United States challenger American Magic, with its race boat Patriot, is strong in the moderate to higher wind range.

The winds for the World Series and Christmas Cup were low to moderate, ranging between six and 15 knots. American Magic helmsman Dean Barker said the AC75s are hard to sail in low wind. "When you drop off a foil it’s sort of game over,” Barker said. "These boats are challenging in the bottom wind range, to just keep foiling 100 percent of the time.” Defender Team New Zealand’s Te Rehutai – the indigenous Maori word for sea spray – was highly tuned for the recent racing and was clearly the fastest boat on show. But, racing on the edge of control times, Team New Zealand made a number of boat handling errors which it will address in the coming weeks.