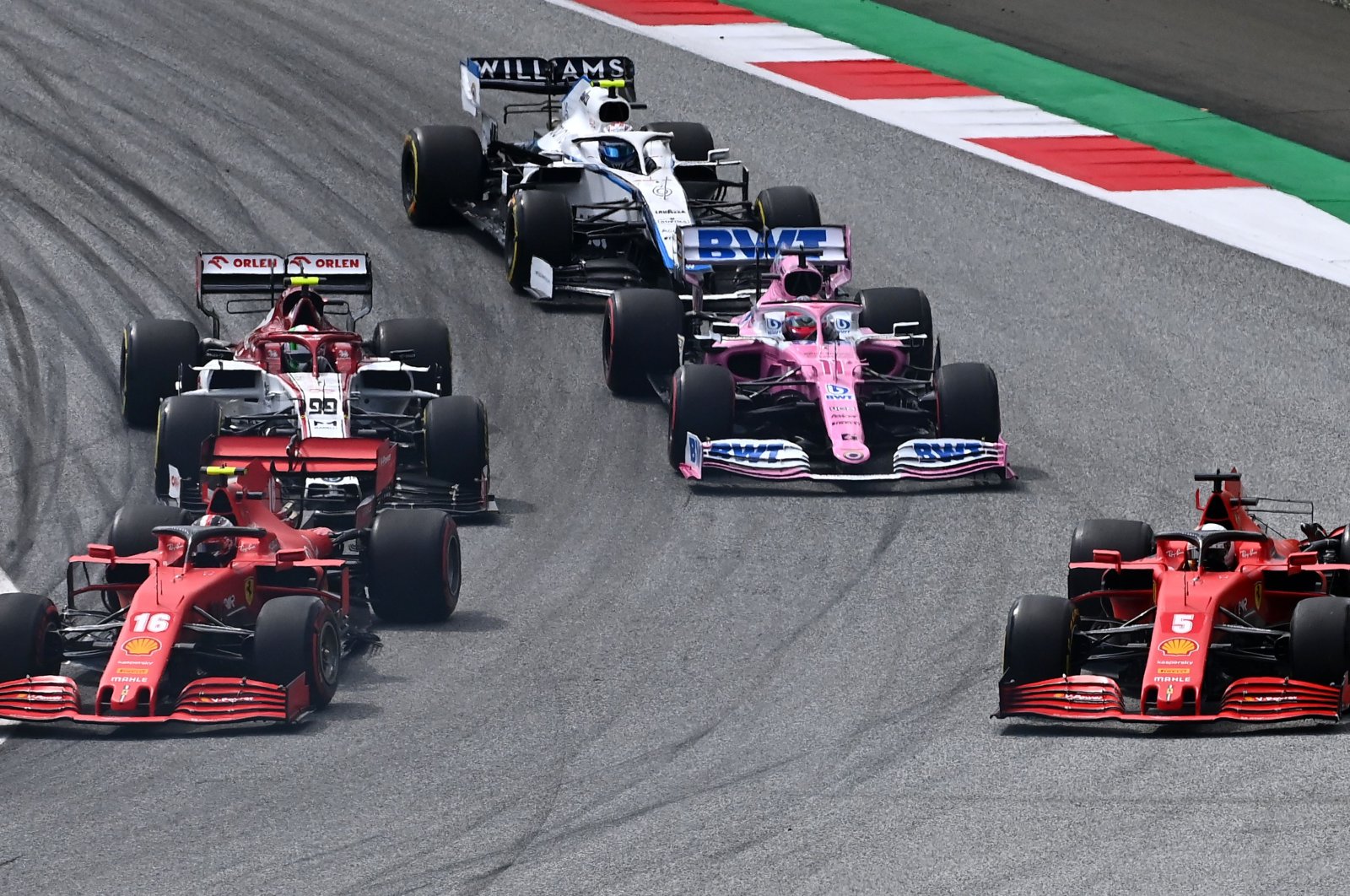 Ferrari drivers Sebastian Vettel (R) and Charles Leclerc (L) after a collision at the start of the Formula One Styrian Grand Prix race in Spielberg, Austria, July 12, 2020. (AFP Photo)
by Agencies Jul 14, 2020 12:30 pm

Starting the F1 season with miserable performances in Austrian double header, Ferrari must quickly make amends as the next race in Hungary is right around the corner

Ferrari must pick up the pieces quickly after their Austrian disaster and focus quickly on the next Formula One race in Hungary on Sunday.

The famed Italian team suffered an even worse nightmare on the second weekend in Spielberg than at the season-opener there a week ago when Charles Leclerc shunted into teammate Sebastian Vettel early on and both had to retire.

The incident came on the first lap. Both drivers were so far back on the grid – Vettel starting 10th and Leclerc 14th – that they tangled in heavy traffic when normally they should have been near the front.

“I was fighting two other cars, we were already three cars into Turn 3," Vettel said.

Leclerc tried to overtake him down the right entering a hairpin bend but instead ended up riding over the back of Vettel’s car, mangling his rear wing.

Vettel, who finished 10th last week on the same Red Bull Ring track, had to retire while Leclerc came into the pits on the fifth lap and was soon out of the race.

“I apologized (to Vettel). Obviously, excuses are not enough in times like this. I am just disappointed in myself," the 22-year-old Leclerc said. “I’ve done a very bad job today. I let the team down.”

The debacle added to the misery as the first race on the Spielberg course had already revealed major problems with the car – and the collision robbed the team of any chance to see what the updates brought forward a week were worth.

Italian dailies were not impressed. "Ferrari disaster," the Tuttosport paper said on Monday, and Corriere dello Sport spoke of "crisis at Ferrari."

That only confirmed a phrase from Formula One sports director Ross Brawn who said in his column on the F1 website that "one of the biggest problems for Ferrari is that of all the teams on the grid, they come under the closest scrutiny from the media, particularly in Italy."

Brawn knows from experience as he was technical director at the Scuderia 1996-2006, with Michael Schumacher winning five world titles during the period.

The 2020 team is a far cry from that, and Brawn said it won't be easy in this coronavirus-affected season.

"They aren't going to turn it around overnight, and there's a long road ahead of them. They need to find out if there is a fundamental problem with the car – and they need to find out fast – because clearly they are some way off the pace," Brawn said.

Ferrari had initially hoped to make up at least some of the gap of around one second per lap on leaders Mercedes with the first part of the upgrades.

"We would really like to get the race on the line and some laps to see where the car is, but unfortunately we will not get that," team principal Mattia Binotto said.

But he remained defiant, saying: "We must just get on with our work. Difficult moments can bring out the best in people and I'm sure that will be the case now."

Leclerc admitted to his mistake and added: "It's not easy for the whole team who worked hard to bring upgrades here. We are going through a difficult time, and we don't need this."

Ferrari is setting its main hopes in the young Monegasque who so impressively finished ahead of Vettel in his debut season at the team in 2019 and then also somehow managed to finish second in the season-opener with the inferior car.

While Leclerc had his contract renewed until 2024, Vettel must leave after the season as he didn't get a new deal after six years with the team where he failed to add to his four world titles won at Red Bull.

Any dream that he could go out with a title, after all, has effectively already ended but the German remained diplomatic ahead of the Budapest race which he won twice for Ferrari, in 2015 and 2017.

"I am generally optimistic and at least I don't have to wait long to be back in the car, so let's hope that Hungary will be a better place for us," Vettel said.