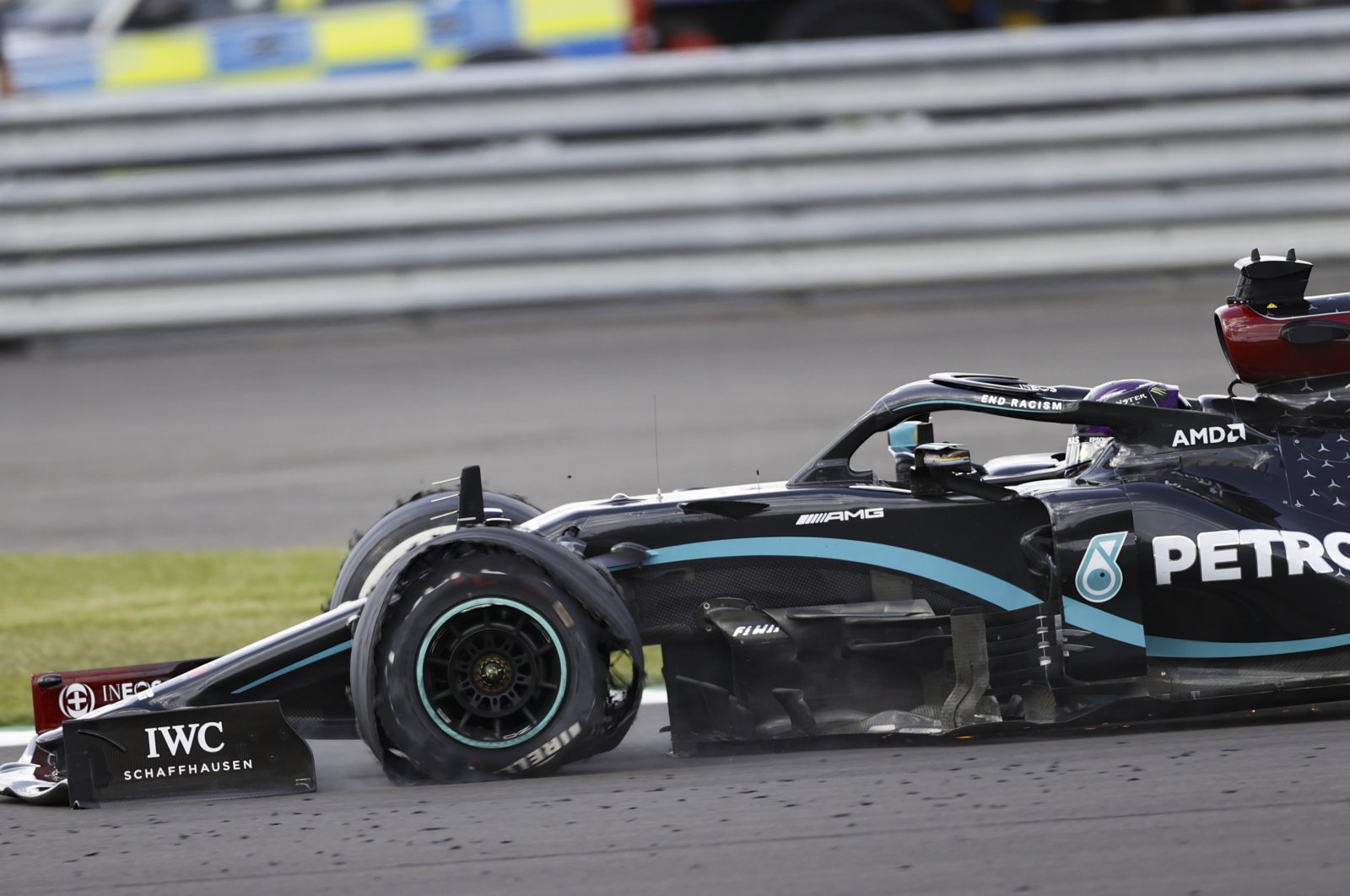 The six-time world champion led from lights to flag, and through two Safety Car interventions, before he suffered a front left tire failure on his final lap, leaving him to nurse his Mercedes home with second-placed Max Verstappen in hot pursuit in his Red Bull. He finished 5.9 seconds behind.

The Dutchman had inherited second when Hamilton's Mercedes teammate Valtteri Bottas, running comfortably in second for most of the contest, was hit by the same problem, his front-left delaminating and deflating on his penultimate lap.

The Finn limped back to the pits and finished pointless in 11th place while his rivals slowed to preserve their rubber, Ferrari's Charles Leclerc taking third place behind Verstappen ahead of Daniel Ricciardo of Renault and Lando Norris of McLaren.

Hamilton's victory was the 87th of his career and moved him within four of Michael Schumacher's record of 91.

Norris's teammate Carlos Sainz was also a puncture victim in the closing laps of an exciting race that saw him fall from fourth to 13th.

Esteban Ocon finished sixth in the second Renault ahead of Pierre Gasly of Alpha Tauri, Alex Albon in the second Red Bull, Lance Stroll of Racing Point and four-time champion Sebastian Vettel, in his final season with Ferrari.

"In the last few laps, I started to back off and then on the last lap, it just deflated," said Hamilton.

'Heart in the mouth'

"It was heart in the mouth. I nearly didn't get round the last two corners. I was managing it and praying to get round and not be too slow."

"I have definitely never experienced anything like that on the last lap and my heart definitely nearly stopped."

In the drivers’ championship, he leads with 88 points after four races, a lead of 30 ahead of the luckless Bottas.

"It was lucky and unlucky for us," said Verstappen.

"Mercedes was too quick. The tires didn't look great with 10 laps to go and then Valtteri got a puncture and they boxed me to go for fastest lap ... Second is a good result,” he said.

Leclerc called it a tricky race. "As soon as I heard Valtteri had a tire problem, I slowed down quite a lot. We took our opportunities."

On another bright, but windy day, Hamilton overcame an imperfect start from his 91st pole position and record seventh in Britain.

He led as he pulled clear before a final corner collision, on the opening lap, involving Kevin Magnussen and the luckless Albon led to the first deployment of a Safety Car.

The Dane's Haas car was on the outside of Albon's Red Bull, with the Thai driver refusing to concede, when they crashed and Magnussen spun into a gravel trap, his front left wheel smashing off in the barriers.

The stewards blamed Albon and gave him a five-second penalty.

The Safety Car led the field for five laps before handing back to Hamilton who stayed in control until lap 13 when Daniil Kvyat suffered a right rear puncture and crashed heavily at Maggots, where both rear wheels smashed off his Alpha Tauri.

He was unhurt, but a second Safety Car was required for five laps while debris was cleared.

This reduced the field to 17, Nico Hulkenberg having failed to start on his dramatic return, with Racing Point, as a stand-in for coronavirus victim Sergio Perez.

The interruptions did nothing to halt Mercedes' progress at the front, Hamilton and Bottas pulling clear of Verstappen with some ease.

By lap 30, the gap was eight seconds with Leclerc 14 seconds adrift.

Behind them, Grosjean and Sainz were engaged in a fierce battle for fifth, which saw the Frenchman weaving to resist at Brooklands.

The Frenchman continued his aggressive approach, however, in a duel with Ricciardo.

It was duly noted by the stewards as more "moving under braking." Ricciardo called it "sketchy."