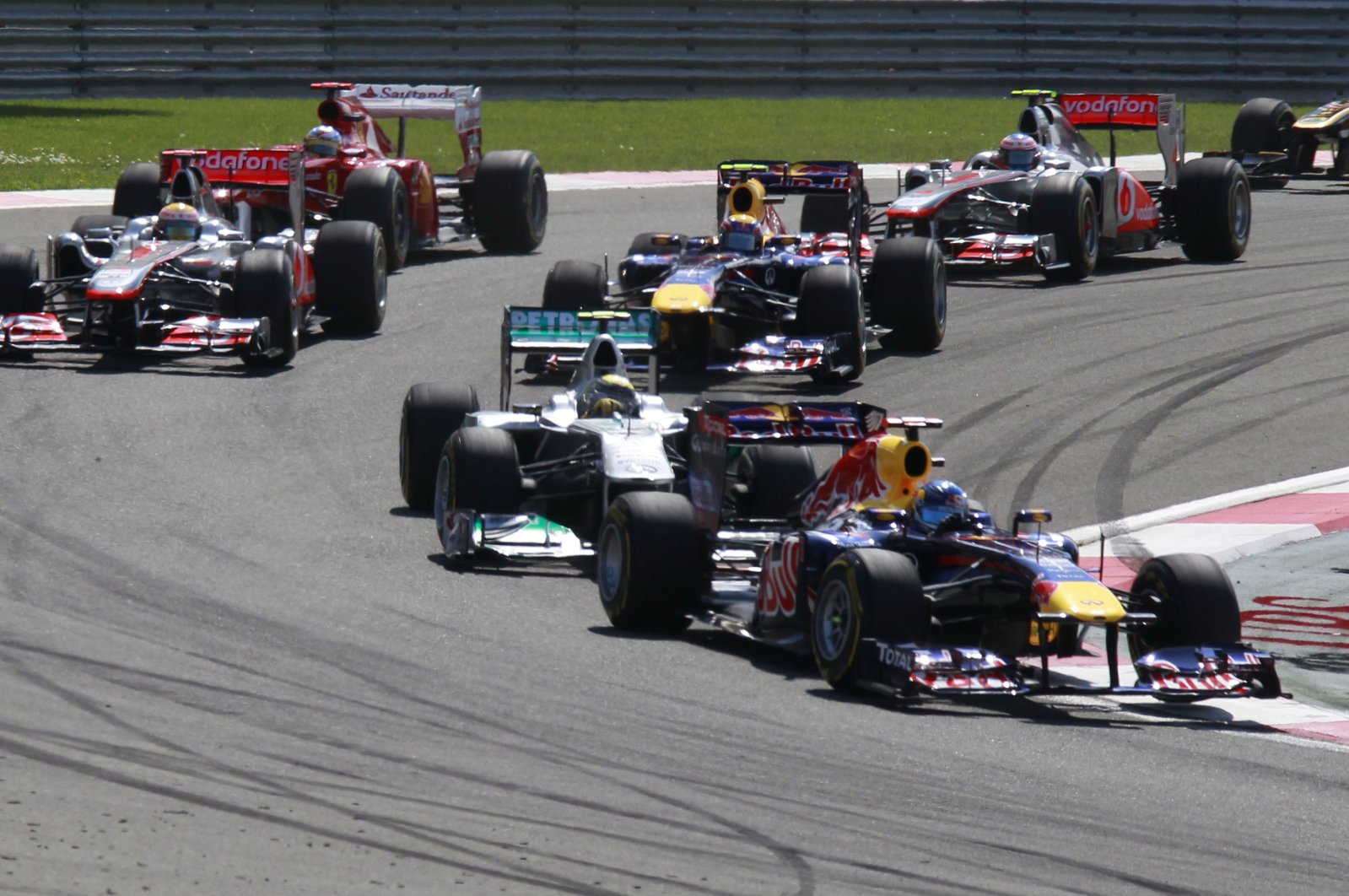 Red Bull driver Sebastian Vettel (R) leads into a turn during the Formula One Turkish Grand Prix at the Istanbul Park circuit in Istanbul, Turkey, May 8, 2011. (Reuters Photo)
by DAILY SABAH WITH AGENCIES Sep 16, 2020 2:18 pm

Famous for some of the most intense turns in Formula One, the Istanbul Park circuit will physically and mentally challenge drivers with its 14 turns during the Turkish Grand Prix in November

Istanbul Park, known among Formula One drivers for its thrilling and challenging circuit, is set to host the Turkish Grand Prix after a nine-year break from the seasonal calendar.

The track, which was inaugurated in 2005, was added to the season calendar for the first time since 2011.

While the only current drivers to have won in years past at Istanbul Park are Kimi Raikkonen, six-time world champion Lewis Hamilton and four-time champion Sebastian Vettel, the circuit is still held in high regard among the drivers, especially for its turns.

Designed by the legendary Hermann Tilke, the circuit features 14 turns in total but the most notorious among them is perhaps Turn 8, earning itself the nickname of diabolica with its four apexes.

Measuring at 640 meters (2,100 feet), or around 12% of the length of the whole circuit, the corner is the most demanding among the tracks twists and turns.

Its an awesome corner, we try to take it flat year by year, Sebastian Vettel said in 2011, ahead of Istanbuls last grand prix.

Then-Mercedes driver, Williams Nice Roseberg was also among the competitors who couldnt get enough of the "diabolic" back then.

"If I had to create a fantasy Formula One circuit, this corner (Turn 8) would definitely be included, Nico Roseberg said in 2011.

Turn 8 was also called a pain in the neck by now-retired Mark Webber due to the sustained G-forces drivers had to endure during the eight-second turn.

While the technological advancements and changing regulations will surely introduce fresh takes on Istanbul Parks corners, the sharp downhill left-hander Turn 1 is also among the ones that challenge drivers.

"It's an old-school circuit, something I was watching on TV when I was younger. (That) massive left-hander, flat-out, is going to be pretty impressive," Renault's Esteban Ocon told reporters recently.

While Formula One organizers have scrapped everything from races with fans to news conferences as a precaution amid the COVID-19 pandemic, the company that operates Istanbul Park announced a limited number of fans would be allowed to attend the race.

Vural Ak, chairman of Intercity, which operates the Istanbul Park racetrack, announced earlier this month that the tickets for the Turkish Grand Prix would be the cheapest for a Formula One race in the world, with a limited-time offer for a three-day pass for TL 90 ($12).

And in line with Aks statement, the limited-offer tickets went on sale on Tuesday and saw an overwhelming demand.

According to local reports, within minutes after the tickets were offered on Biletix, Ticketmasters Turkey branch, the demand lead servers to crash, leaving many to experience technical difficulties.

When the dust settled, Intercity said the tickets were sold in less than three hours.

"A total of 10,000 discounted tickets were offered on Biletix. Those tickets were sold out in around 2 1/2 hours. We apologize for the technical difficulties encountered during the initial moments of the offering. We also thank you for the overwhelming demand. The tickets will continue to be offered at regular prices," Intercity said in a statement.

But some took to social media to voice their frustration and claimed tickets sold out in as little as 15 minutes, raising suspicions of scalper activity.

Currently, the cheapest tickets for the Turkish Grand Prix start at TL 1,050, more than 10 times the price of the discounted ones. But one silver lining for unlucky fans considering purchasing the more expensive ones is that they offer a better view of Turn 8, which is sure to see some action during the race.