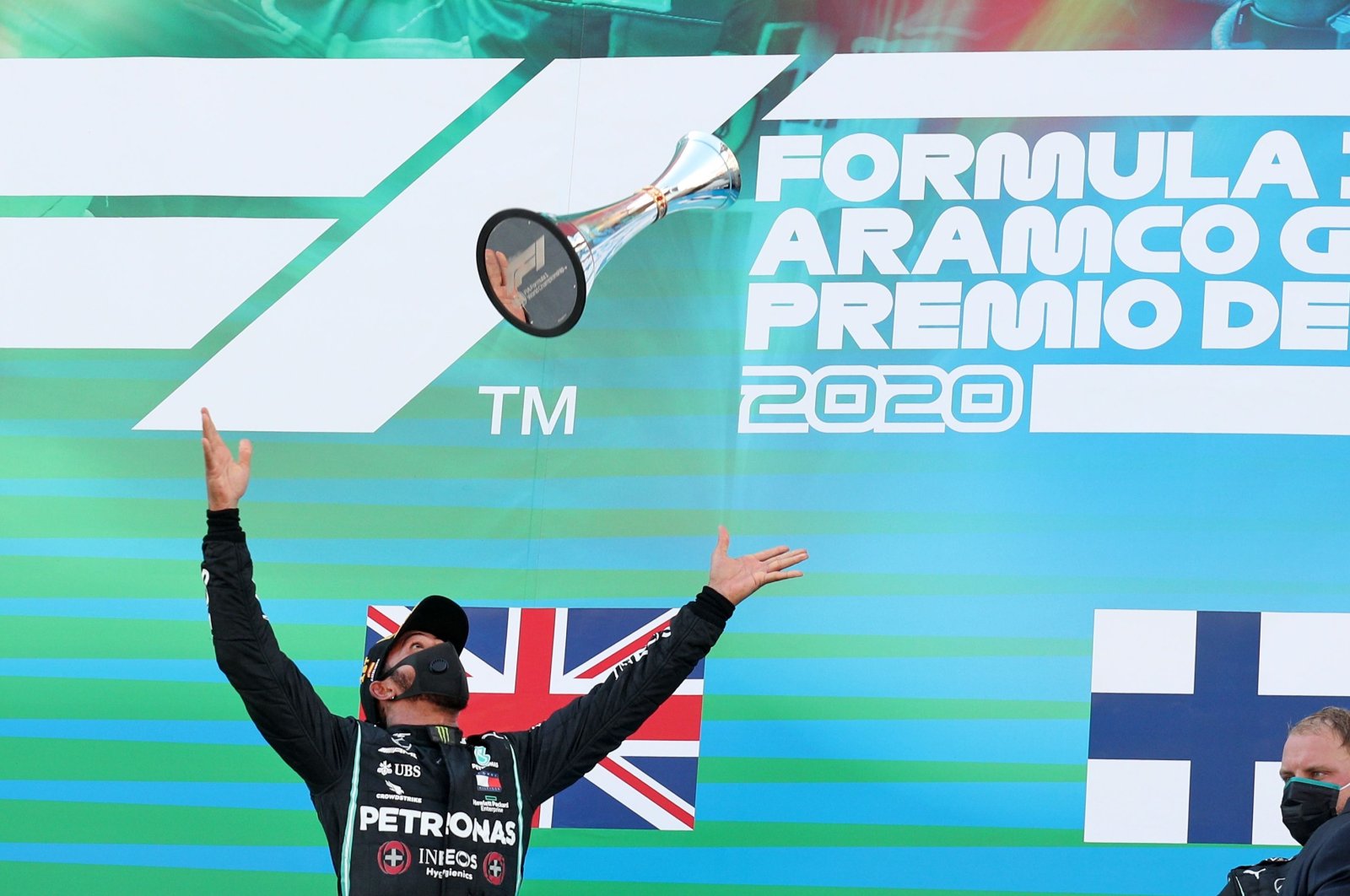 Worried, too, about how the Mercedes tires would cope under a searing summer sun after wilting last week in the lesser heat of Silverstone.

His concerns proved as unfounded as his 88th career victory was comprehensive. The six-time world champion is now within three of Michael Schumacher's Formula One record of 91 wins.

Hamilton beat Verstappen by 24 seconds to extend his championship lead over him to 37 points - 132 to 95 - after six races.

“I was just in a daze out there. I felt really good," Hamilton said. “I didn’t even know it was the last lap I was so zoned in.”

His teammate Valtteri Bottas is fading from the picture, and already languishes 43 points behind Hamilton despite winning the first race of the season.

“It was a surprise because we had that problem with the tires last weekend," Hamilton said. "But we seem to have understood it.”

The pre-race thinking from Mercedes was that Verstappen – who has eight podiums in the last nine races – was favorite. But a thrilling contest never happened, and Verstappen's priority became keeping Bottas in third place.

“It was good to split the two Mercedes. I didn’t have the pace like Lewis but I’m happy with second," he said. “The start was crucial to get ahead of Valtteri."

Although Bottas secured a bonus point for the fastest lap, he is six points behind Verstappen in the standings.

The winding 4.7-kilometer ( 2.9-mile) Circuit de Barcelona-Catalunya, with its combination of slow and fast corners, is one of the hardest for overtaking.

After narrowly securing a record-extending 92nd career pole position Hamilton made a strong start on the long straight to the first corner. But Bottas was overtaken by Verstappen and the Racing Point of Lance Stroll – who jumped from fifth to third with a fine move on Bottas' right flank.

“The start was the key point, I lost a position and then had to push hard to make ground and suffered the tire condition,” Bottas said. “I was behind Max and everyone knows how hard that is."

Track temperatures on the circuit were around 50 degrees C (122 F) and Bottas was concerned.

“These black overalls are hot,” he said during the race, throwing in an expletive for emphasis.

It was another miserable day for struggling Ferrari, with Sebastian Vettel seventh and Charles Leclerc abandoning after his engine cut out on track.

“I don’t know why the car switched off completely,” Leclerc said.

He crawled into the pits but his race was over on lap 41.

Had he stayed out on track, he would likely have been lapped by Hamilton just as Vettel was.

Hamilton set the pace with a confident start.

While he and Verstappen swapped fastest lap times, Bottas labored behind Stroll for four laps.

It was Verstappen – and not Hamilton – who was complaining about his rear tires and by lap 20 of 66 he said there was “nothing left” in them.

The ice-cool Dutchman was getting flustered.

“Do you want me to repeat it again?” he shouted moments later on his radio. “I’m losing so much time.”

Finally, his team brought him in for new tires on lap 22 but he was 10 seconds behind Hamilton.

Both Mercedes pitted for new tires on the next lap. But a blip attaching the rear left saw Hamilton emerging about four seconds clear of Verstappen. He was given a brief glimmer of hope as Hamilton’s tire was showing signs of blistering only six laps after being fitted.

But Hamilton was soon pulling away again.

Racing Point’s Sergio Perez, who missed the last two races as he recovered from the coronavirus, finished in fourth place ahead of Stroll with McLaren’s Carlos Sainz Jr. in sixth.

Vettel is having his worst start since 2008 but drove very well with just the one tire stop.

It proved the right choice but came after a tense exchange between Vettel and his race engineer.

“What do you think about going to the end on these tires?” his engineer asked.

After barking out an expletive, Vettel replied: “I asked you this before!”

Minutes earlier, Vettel had asked his team whether they thought he could go to the end on the same tires – and got no response.

His final season with Ferrari could prove to be long and arduous while Hamilton is odds-on to end it with a seventh title to equal Schumacher – Vettel's childhood hero.