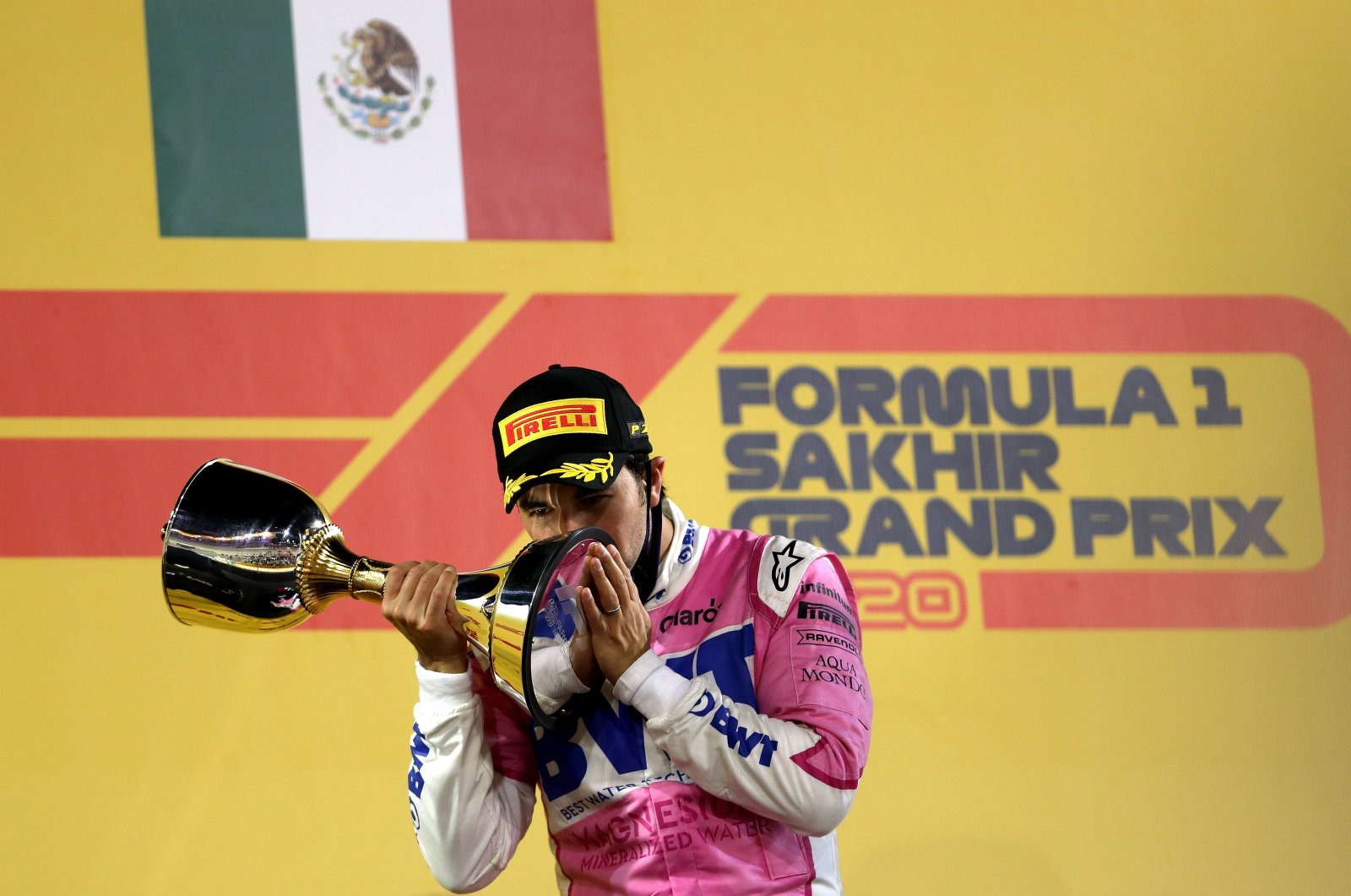 Racing Point's Mexican driver Sergio Perez kisses his 1st-place trophy on the podium after the Sakhir Formula One Grand Prix at the Bahrain International Circuit in the city of Sakhir on Dec. 6, 2020. (AFP Photo)
by ASSOCIATED PRESS Dec 06, 2020 10:22 pm
RECOMMENDED

Sergio Perez stayed calm amid the chaos at a remarkable Sakhir Grand Prix to clinch his first Formula One career win Sunday in his 190th race.

The Mexican does not even have an F1 seat next year after being replaced by Sebastian Vettel.

George Russell looked like capping a remarkable Mercedes debut with a confident win until his team made a terrible blunder after bringing him and Valtteri Bottas in for another change when the safety car was out on track with about 25 laps to go.

Russell’s stop was a bit slow but nothing compared to the one for Bottas, which took an agonizing 27 seconds as the mechanics could not fit his left front tire properly. Remarkably, Russell was then called in again because the team had fitted him with a mixed set of compound tires.

It was a rare failure for a Mercedes team that has dominated F1 since 2014 by winning every drivers’ and constructors’ championship.

Still, even with that mishap, Russell roared back brilliantly from fifth to second place and was closing on Perez when his rear tire punctured with eight laps remaining.

Perez, who made his debut in 2011, had a clear run to victory and clinched his 10th career podium, while Ocon got his first.

Russell finished ninth while Bottas was eighth on a humiliating night for F1 powerhouse Mercedes, which almost never makes mistakes. The illegal mixed compound tire change for Russell was being investigated by stewards after the race.

Russell is under contract with Williams but replaced Lewis Hamilton as the seven-time world champion recovers from the coronavirus. Hamilton, who sealed the title last month, remains doubtful for next weekend's season-ending Abu Dhabi GP.

The race was halted after a first-lap crash caused by Ferrari's Charles Leclerc, who broke too early and clipped Perez's car. That forced Verstappen to go wide in order to avoid Perez and he went off into some gravel and crashed into a wall.