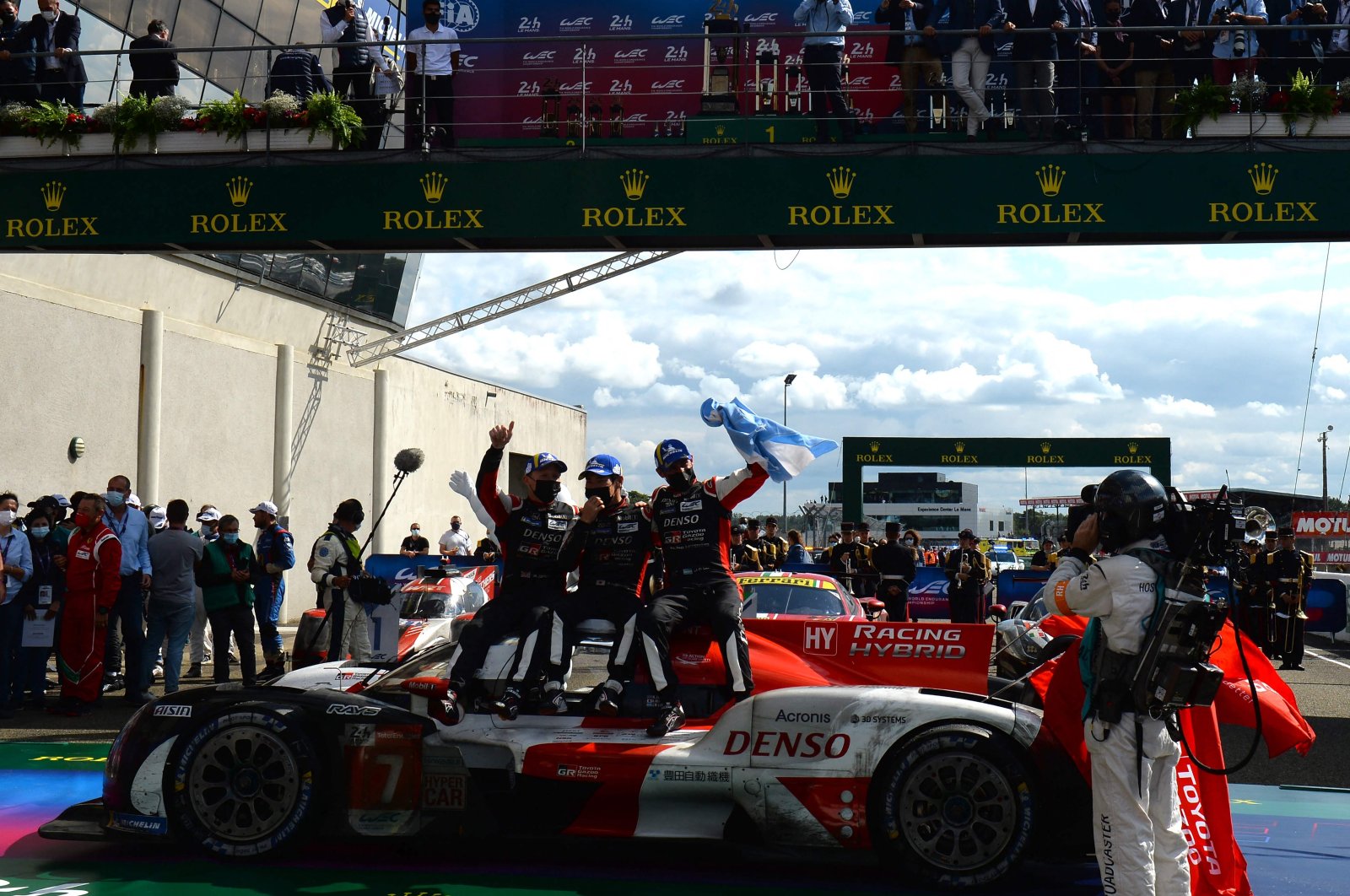 Toyota won the 24 Hours of Le Mans endurance race for the fourth year in a row on Sunday. Drivers Kamui Kobayashi, Mike Conway and Jose Maria Lopez finally came good after years of ill-luck with Kobayashi admitting that success in the iconic event felt "a bit unreal."

Nakajima pitted behind Kobayashi in the leading car shortly before the finish to ensure they passed the line virtually in tandem, albeit with two laps separating them in the classification.

"We went through so many experiences before we got there. At Le Mans, you always have to work and this time too we had problems during the race," said former F1 driver Kobayashi.

"It wasn't easy, we tried to maximize what we could do to survive and we did it. It's a bit unreal. Often, Le Mans brought us nothing but bad luck, but today we are winning. It's awesome."

Conway said he cried "like a little girl" after seeing Kobayashi take the chequered flag.

"We came close so many times, and to get it done here with the new hypercar as well with these boys... teammates did a stellar job as always," Conway told Eurosport.

"I was crying like a little girl. It's a bit of everything, you work so hard for it each year you forget how hard it is."

The two entries from U.S. film director Jim Glickenhaus, at 71 supervising events from the pits in a stetson, completed the top five.

The stands and campsites were occupied again after last year's Le Mans was held behind closed doors, coronavirus restrictions keeping the traditional crowd numbering 250,000 at home.

With capacity capped at 20%, the 50,000 die-hard fans burning the midnight oil were treated to another demonstration of Toyota dominance as Le Mans ushered in the Hypercar era.

Kobayashi, a former F1 driver with Toyota and Sauber, had ensured the prime spot on the grid after setting the fastest time in Friday qualifying.

Last year, he and his teammates set out from pole but finished third after a lengthy pit stop for a turbo change.

In 2019 they were coasting in front only for a puncture one hour out to put paid to their hopes of victory.

They also took second in 2018 and the year before Kobayashi and Conway were part of the team that took pole but failed to finish with clutch issues.

Saturday's start for the 89th Le Mans was treated to plenty of pomp and ceremony, as befits one of motorsport's crown jewels,

At 16h00 precisely the turbo-charged machines boasting more horsepower than Napoleon's army, roared onto the track.

But in a break from tradition, organizers allowed them three formation laps to adapt to conditions, rendered treacherous by heavy rain shortly before Ferrari chairperson John Elkann delivered the time-honored instruction to the intrepid drivers to "Start your engines."

Conway was behind the wheel of Toyota's number seven car at the start and despite a puncture, he carved out a one minute 13 seconds lead before handing the wheel to Kobayashi.

Buemi started from second on the grid but was involved in a collision with a rival Glickenhaus during the opening lap before the two Toyotas settled into a comfortable 1-2.

During the night, with windscreen wipers mercifully unemployed as the rain stayed away, Toyota's number seven car remained in control, apart from one heart-stopping moment when Kobayashi went off track, with the sister car briefly hitting the front before normal service was resumed.

As dawn broke, their advantage grew to around three minutes when, with Buemi at the wheel, the number eight car slowed to a halt with refueling trouble.

After a reset, Buemi was back up and running, albeit a lap behind.

Conway handed over to Kobayashi for the closing hour and with the car running sweetly the team finally got to etch their names on the iconic race's list of winners.