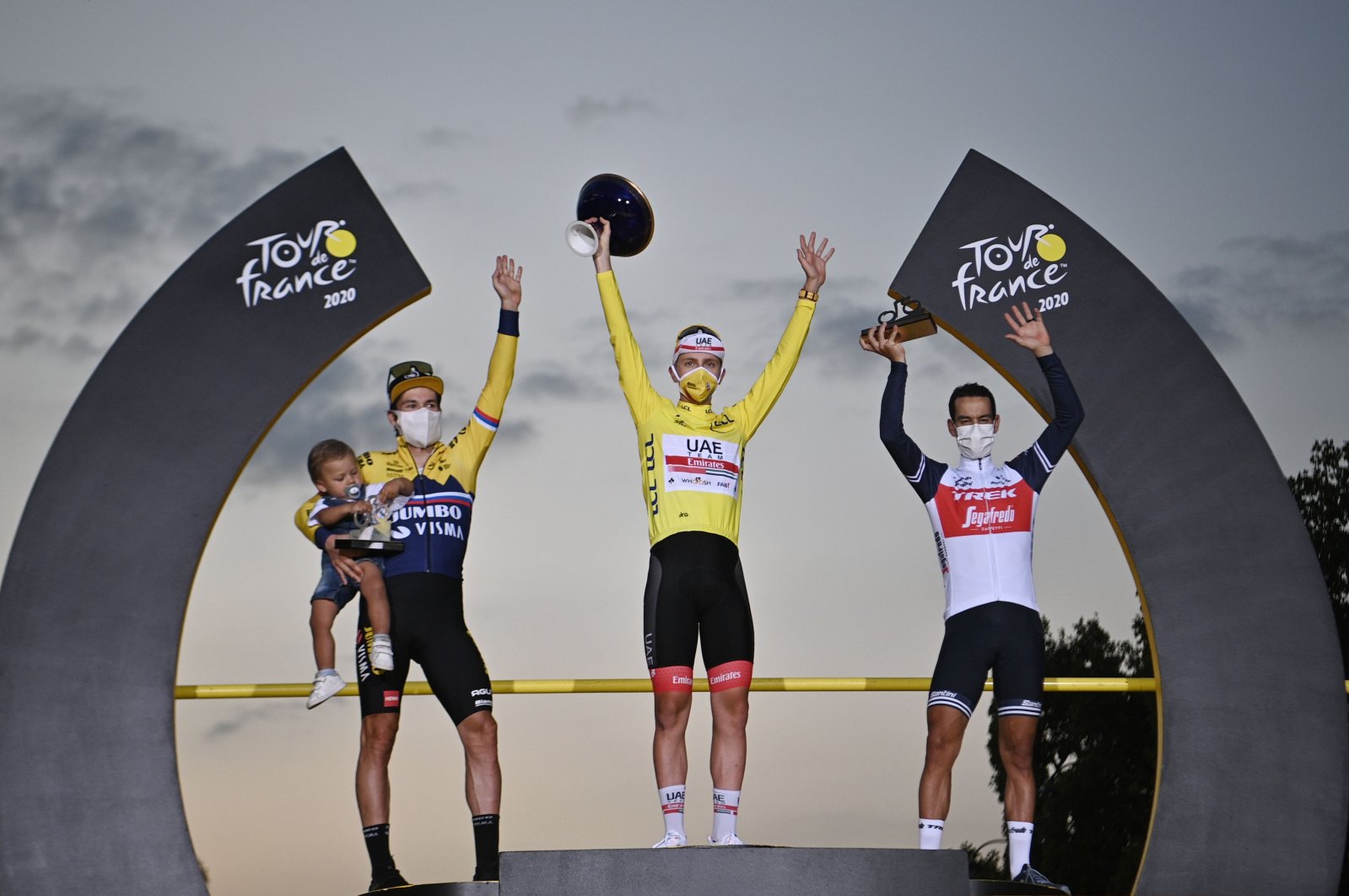 In a stunning performance for the ages, Tour de France rookie Tadej Pogacar won cycling’s showpiece race Sunday on the eve of his 22nd birthday, becoming the second-youngest winner of the 117-year-old event that this year braved – and overcame – France’s worsening coronavirus epidemic.

With a yellow face mask to match the race winner's yellow jersey, Pogacar stood atop the podium backlit by the pink hues of dusk, transformed from promising prodigy into cycling superstar, the youngest winner since World War II and the first from Slovenia. While the mask hid his smiles, the creases around his eyes gave them away.

“This is just the top of the top,” he said. “It's been an amazing three-week adventure."

His victory was remarkable, too, for the way in which he sealed it: at the last possible moment, on the penultimate stage before Sunday’s finish on Paris’ Champs-Elysees. During the cycling marathon over all five of France's mountain ranges and 3,482 punishing kilometers (2,164 miles), Pogacar held the race lead and the iconic yellow jersey for just one stage – the last and most important one into Paris, with a yellow bike to match.

Pogacar KO'd the race and Slovenian countryman Primoz Roglic by snatching away the jersey that he'd worn for 11 days, in a high-drama time trial Saturday.

Their 1-2 is the first for one country since British riders Bradley Wiggins and Chris Froome also took the top spots at the 2012 Tour. Australian Richie Porte rounded out this year's podium, at age 35, after his brilliant time trial that hoisted him from fourth to third overall.

Irish rider Sam Bennett won the prestigious final sprint on the Champs-Elysees, giving him his second stage win at this Tour. He also won the race's green jersey, awarded for picking up the most points in sprints during and at the finish of stages.

With jets trailing plumes of red, white and blue smoke above the riders as they raced through Paris, on the Champs-Elysees lined with French tricolor flags, the Tour was also celebrating a victory – over the coronavirus.

When the Tour, delayed because of the epidemic from its usual spot in July, left the start town of Nice three weeks ago, it was unsure that enough riders would be able to stay virus-free for the race to reach Paris.

But none of the 176 starters, or 146 finishers, tested positive in multiple batteries of tests, validating the hermetic bubble of measures to shield them from infection.

Roadside fans still cheered them on, mostly respecting riders’ pleas that they wear face masks, but were kept well away at stage starts and finishes.

The only COVID-19 positives touched a handful of team employees and the race director, even as infection numbers soared across the country.

The director, Christian Prudhomme, was back after a week of self-isolation. Wearing a mask, he signaled the start of Sunday’s stage at Mantes-La-Jolie west of Paris with a wave of his flag through the sunroof of his car.

Mask-wearing spectators waiting for the rumble of the riders’ arrival on the handlebar-shaking cobbles of the Champs-Elysees said holding the Tour had lit up a dark year and demonstrated that the coronavirus need not bring all life to a grinding halt, if health measures are respected. The famous boulevard lacked its usual fervor, a victim of the virus, with the usually rows-deep crowds limited to a socially distanced maximum of 5,000 people, clumped in pens by police and barriers.

But Pauline Bourbonnaud, a 22-year-old podiatry student, said it was nothing short of “an exploit, enormous” that the Tour negotiated the epidemic with riders unscathed. At previous Tours, she’d been roadside when they zoomed through her region in central France. The postponement this year to September, with her back in Paris for studies, allowed her to soak in the finish for the first time.

“It’s important to have events like this that are diverting. People needed the Tour after a year like this,” she said.

One of the pandemic-defying Tour's most enthusiastic backers was also its most powerful: French President Emmanuel Macron. With his government trying to revive France’s COVID-battered economy, Macron praised the race as “the pride of the country” and an example of how it must learn to live with the virus and the restrictions it imposes.

“Even in September, the Tour de France is magic!” Macron tweeted Saturday after Pogacar crushed Roglic in the time trial.

Largely deprived of racing as the epidemic tore across the globe, and with those in lockdown only able to keep fit on home trainers, riders arrived at the Tour somewhat race-rusty but with the pent-up energy of caged hounds, their disrupted seasons reconfigured to make them peak physically on cycling’s biggest stage.

After a slow-burn start, with multiple crashes, the racing became increasingly furious. Roglic, the winner of last year’s Spanish Vuelta and a pre-Tour favorite, was backed by a powerful Jumbo-Visma team of star riders devoted to putting him in yellow – achieved on Stage 9 – and then keeping the prized jersey until Paris.

He first demolished Roglic’s 57-second lead and then built his own Tour-winning margin of 59 seconds in the time trial, an astounding reversal of fortunes.

The birth of the Pogacar supernova is now set to ripple across the cycling galaxy for years to come. His future rivals are unlikely to repeat Jumbo-Visma’s mistake of allowing him to ride his way back into contention, as he did after losing time in crosswinds in the first week when he slumped from third to 16th.

By conquering the Tour on his first attempt, Pogacar joined an elite club of rookie winners that includes, among others, the great Eddy Merckx, who ended up winning five. Pogacar unseated Egan Bernal, who was 22 when he won last year, as the Tour’s youngest champion since World War II. And he became the race's second-youngest winner ever, behind only Henri Cornet, who was just shy of 20 when he was crowned in 1904.