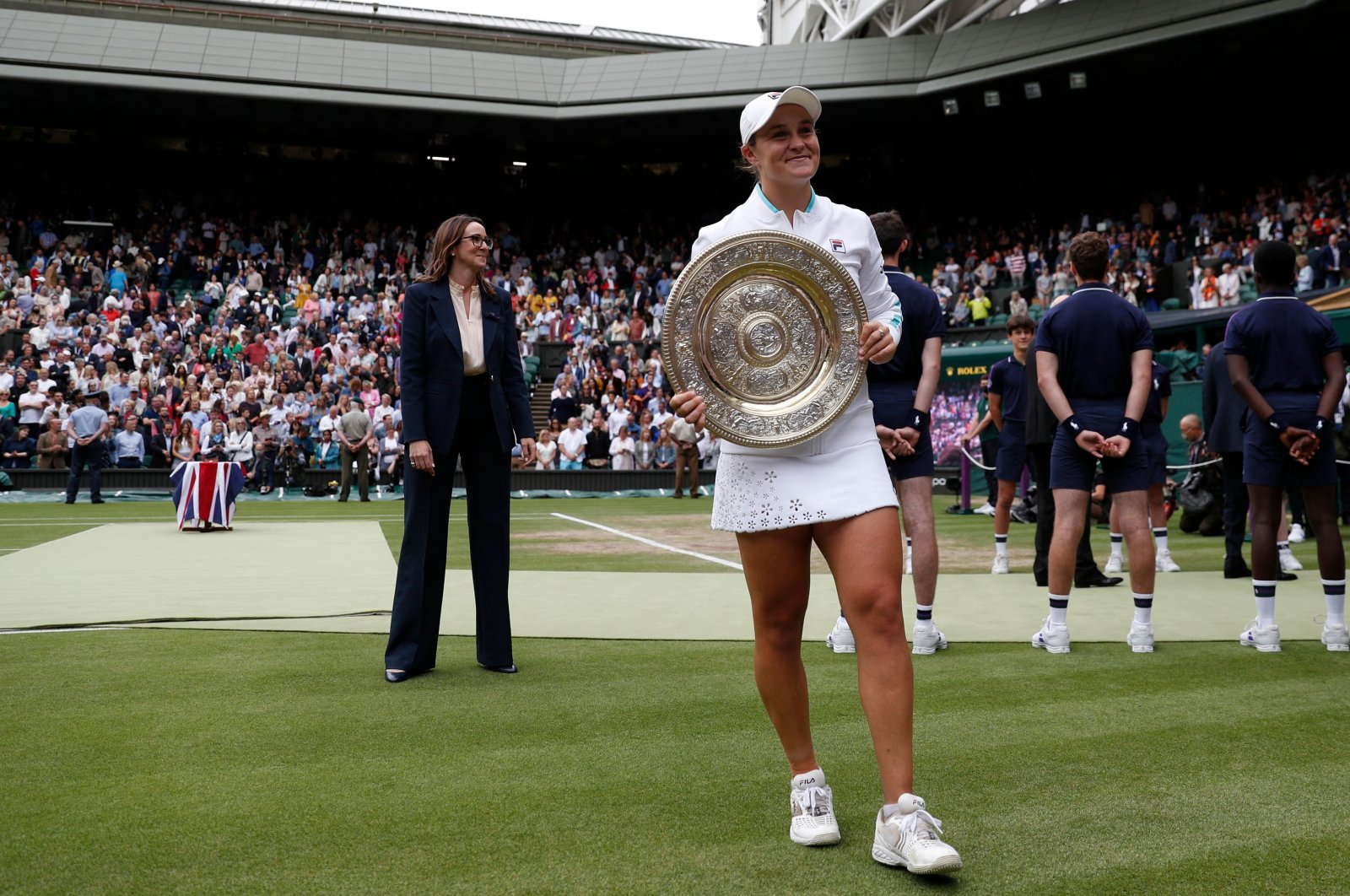 Australia's Ashleigh Barty poses with the trophy after defeating Czech Republic's Karolina Pliskova during their women's singles final match on the twelfth day of the 2021 Wimbledon Championships at the All England Tennis Club in Wimbledon, southwest London, on July 10, 2021. (AFP Photo)
by ASSOCIATED PRESS Jul 10, 2021 6:31 pm
RECOMMENDED

Barty got off to a perfect start in the Wimbledon final by collecting the first 14 points, then needed to hold off a comeback bid, before defeating Pliskova 6-3, 6-7 (4), 6-3.

The top-seeded Barty adds this championship to the one she won at the French Open in 2019. Barty is the first Australian woman to win the singles trophy at the All England Club since Evonne Goolagong in 1980.

Barty says she was inspired by Goolagong and wore an outfit at Wimbledon that was a tribute to the dress Goolagong played in when she won the tournament for the first time in 1971.

Barty, who is 25, was the junior champion at Wimbledon a decade ago, then left the tennis tour for nearly two years in 2014 because of burnout. She played professional cricket back home, then eventually decided to return to her other sport.

She was at her best at the beginning of each set against the eighth-seeded Pliskova, a 29-year-old from the Czech Republic with a big serve.

Barty’s most significant wobble came late in the second set. She served for the victory ahead 6-5 but sailed consecutive forehands long to get broken, then was shaky in the ensuing tiebreaker, which she ceded with a double-fault.

In the third, though, Barty went up an early break, led 3-0 and stayed the course in the first Wimbledon women's final to go three sets since 2012. It also was the first since 1977 between two participants who never had been that far at the All England Club. Neither Barty nor Pliskova made it past the fourth round at the grass-court major until this fortnight.

The match was played under a cloud-filled sky and with Centre Court’s retractable roof open despite rain in the forecast for much of the afternoon. Because of the threat of showers, Barty and Pliskova shared a warmup session under the roof at No. 1 Court earlier in the day, at times standing side-by-side while hitting shots.

They shared some smiles and chatter during the coin toss before the final, but once things got serious, Barty was not messing around one bit. Right from the get-go, there was not a hint of uneasiness or uncertainty for Barty. Her strokes were confident. Her demeanor, too. During the match-opening run that put her up 3-0, love-30 and, after Pliskova finally won a couple of points, 4-0 after 11 minutes, Barty showed off every bit of her versatility and varied skills. She returned Pliskova’s speedy serves – the ones that produced a tournament-high 54 aces entering Saturday – without any trouble. She lobbed Pliskova, who at 6-foot-1 is 8 inches taller than the 5-foot-5 Barty, to win a point. She hit winners with her heavy topspin forehand and set up others with her sliced backhands. She threw in an ace of her own, and actually finished with more than Pliskova, 7-6.

The key stat of the finish probably was this: Barty won 22 of 31 points that lasted nine strokes or more. As balls flew past Pliskova, and the murmuring in the full-capacity stands reached a crescendo – "What is going on? Is she going to win a point?” – she watched with little more in the way of a reaction than a blank stare. Sometimes, she fiddled with her racket strings as if wanting to be anywhere else. Pliskova’s coach, Sascha Bajin, who previously worked with Naomi Osaka and before that was Serena Williams’ hitting partner, sat in the guest box above one baseline with arms crossed and brow furrowed.

Even after Pliskova straightened things out, the rhythm of the first set was odd: A total of six games were won at love. Pliskova finally got the measure of her strokes in the second set, in which she twice trailed by a break before pulling it out. That could have shaken Barty. Except here’s the thing: She speaks clearly about never letting anything get her too down, including the hip injury that knocked her out of the French Open last month and prevented her from her usual preparation for Wimbledon. And so, with her typical grit, Barty managed to get back to the steadier version of herself down the stretch against Pliskova. When she got a second chance to serve it out, Barty didn’t flinch, even when she had to stare down a break point. A missed backhand by Pliskova removed that threat, and Barty then delivered a 108 mph ace. One last backhand miss from Pliskova ended the match, and Barty crouched at the baseline and covered her face with her arm.