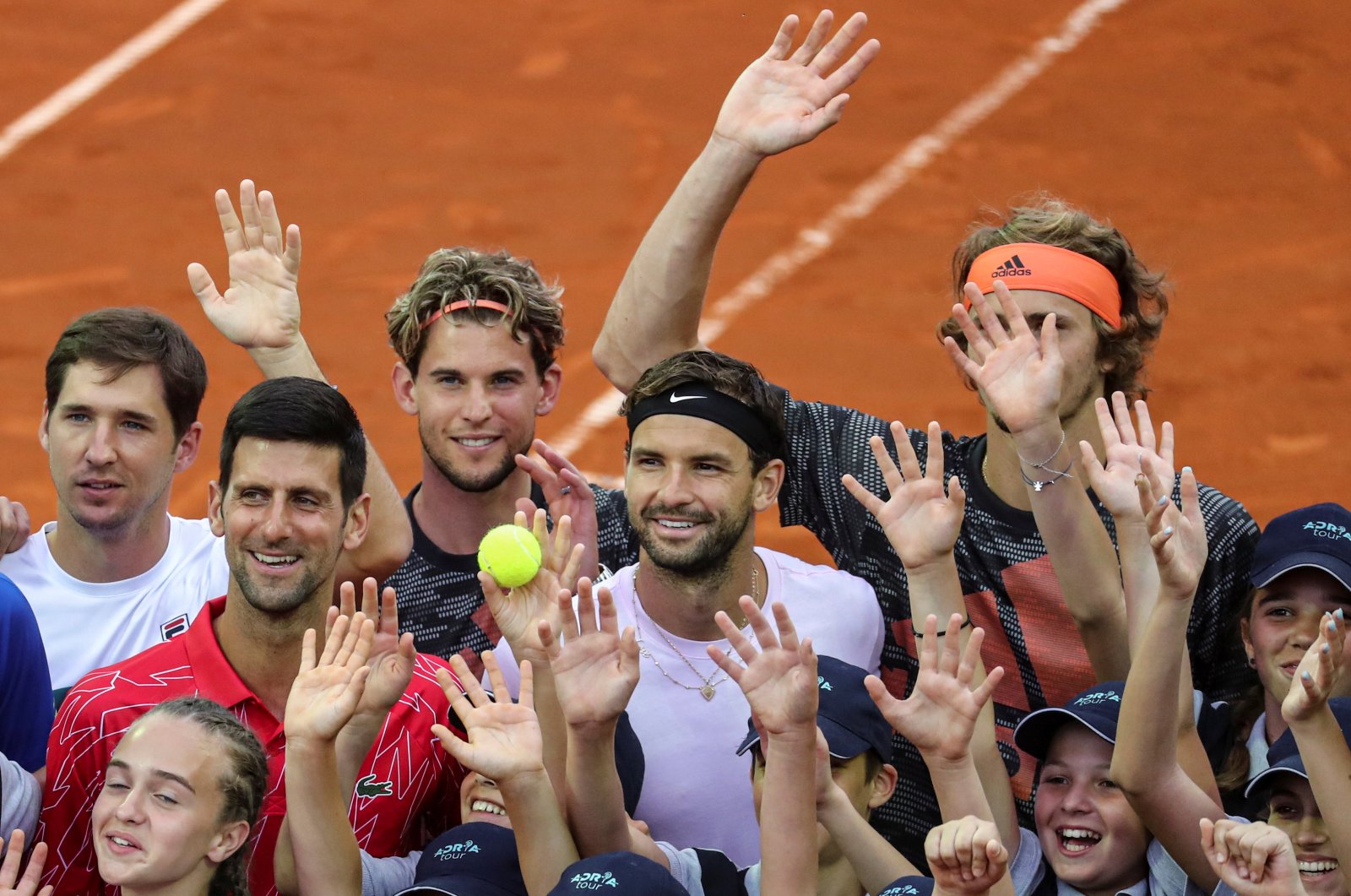 Novak Djokovic tested positive for the coronavirus on Tuesday after taking part in a tennis exhibition series he organized in Serbia and Croatia.

The top-ranked Serb is the fourth player to test positive for the virus after first playing in Belgrade and then again last weekend in Zadar, Croatia. His wife also tested positive.

“The moment we arrived in Belgrade we went to be tested. My result is positive, just as Jelena’s, while the results of our children are negative," Djokovic said in a statement.

Djokovic has been criticized for organizing the tournament and bringing in players from other countries amid the coronavirus pandemic.

Viktor Troicki said Tuesday that he and his pregnant wife have both been diagnosed with the virus, while Grigor Dimitrov, a three-time Grand Slam semifinalist from Bulgaria, said Sunday that he tested positive. Borna Coric played Dimitrov on Saturday in Zadar and said Monday he has also tested positive.

There were no social distancing measures observed at the matches in either country.

“Everything we did in the past month, we did with a pure heart and sincere intentions,” Djokovic said. “Our tournament meant to unite and share a message of solidarity and compassion throughout the region.”

Djokovic, who has previously said he was against taking a vaccine for the virus even if it became mandatory to travel, was the face behind the Adria Tour, a series of exhibition events that started in the Serbian capital and then moved to Zadar.

He left Croatia after the final was canceled and was tested in Belgrade. The statement said Djokovic was showing no symptoms.

Despite the positive test, Djokovic defended the exhibition series.

“It was all borne with a philanthropic idea, to direct all raised funds towards people in need and it warmed my heart to see how everybody strongly responded to this,” Djokovic said. "We organized the tournament at the moment when the virus has weakened, believing that the conditions for hosting the Tour had been met."

“Unfortunately, this virus is still present, and it is a new reality that we are still learning to cope and live with.”

Djokovic said he will remain in self-isolation for 14 days and also apologized to anyone who became infected as a result of the series.

Australian star Nick Kyrgios pulled no punches in his reaction to the incident.

"Boneheaded decision to go ahead with the 'exhibition'," Kyrgios wrote on social media.

"Speedy recovery fellas, but that's what happens when you disregard all protocols. This IS NOT A JOKE."

Kyrgios previously criticized U.S. Open organizers for their decision to go ahead with the Grand Slam.

Britain's Andy Murray called it "a lesson for all of us."

"Once you start having mass gatherings with people coming in from all sorts of countries, it's a recipe for it to kick off," Murray said.

The game was watched by 16,000 fans, the largest sporting gathering seen in Europe since the continent went into lockdown in March.

The Adria Tour had been organized to fill the gap in the virus-hit tennis calendar which has been on ice since mid-March and was played out to a daily crowd of 4,000 fans at Djokovic's tennis center on the banks of the Danube in Belgrade last week.

Dimitrov, Djokovic and Thiem, as well as the other players, were then seen partying at a packed Belgrade night spot.

Thiem has since traveled to the south of France to play in another exhibition tournament in Nice.

The Adria Tour had already suffered an embarrassing setback when the planned Montenegro leg of the four-nation tournament was canceled when it became apparent Serbia's health requirements did not match up to those of Montenegro.

Commenting on social distancing measures during the Belgrade leg, Djokovic argued that both Serbia and the region had been relatively successful in containing the virus.

"Of course you can criticize, you can also say this is dangerous or not, but it's not up to me to make the calls what is health-wise right or wrong," he stated.

Last week, the ATP and WTA said they were restarting their tours in August.

However, the U.S. Open in New York will be played behind closed doors and under strict health protocols which Djokovic has described as "extreme" and "impossible."