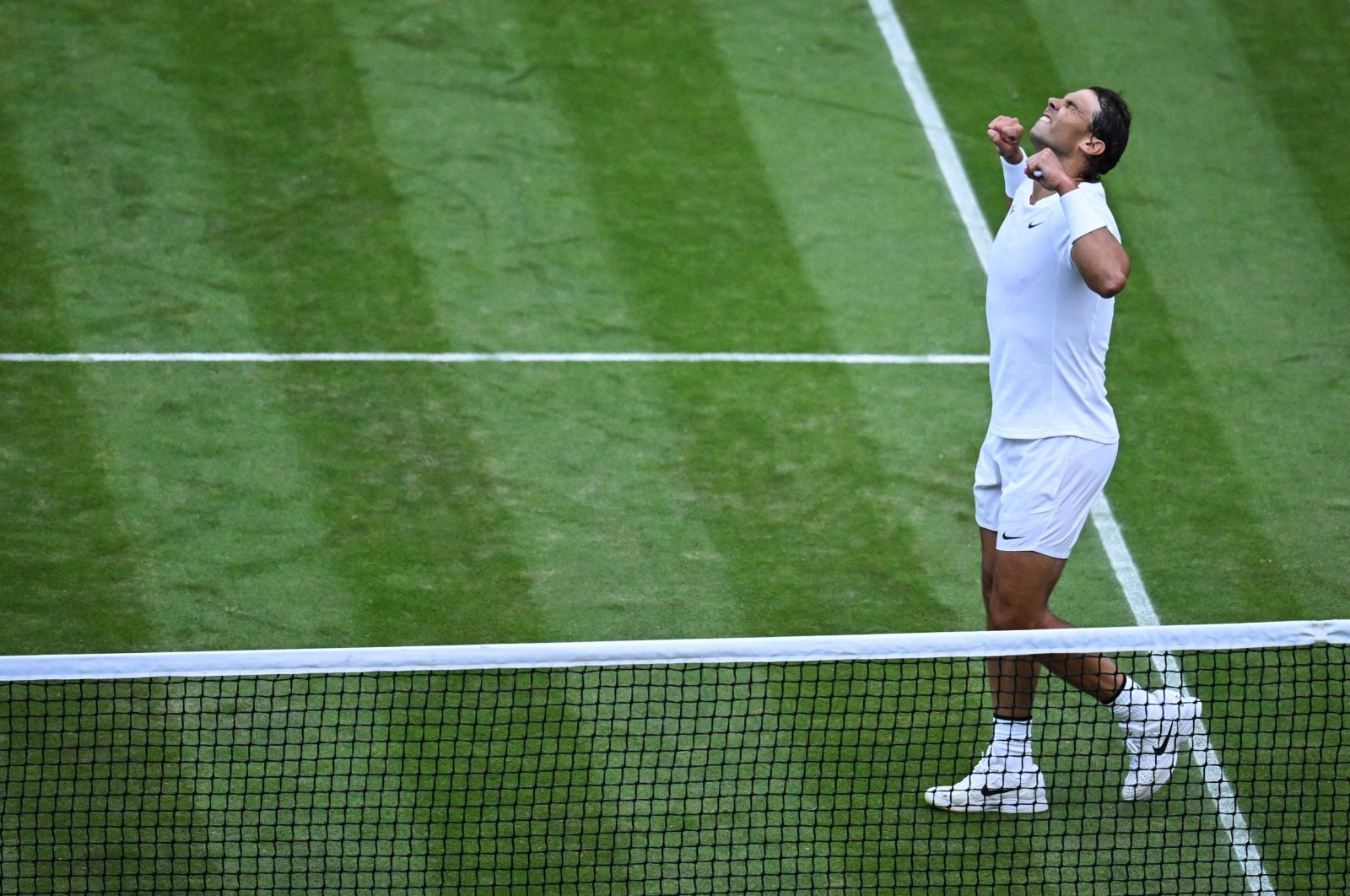 Spain's Rafael Nadal celebrates beating Netherlands' Botic Van De Zandschulp during their round of 16 men's singles tennis match on the eighth day of the 2022 Wimbledon Championships at The All England Tennis Club in Wimbledon, southwest London, July 4, 2022. (AFP Photo)
by Agence France-Presse - AFP Jul 05, 2022 12:47 am
RECOMMENDED

Rafael Nadal swept into the Wimbledon quarterfinals on Monday, staying on course for a crunch meeting with Nick Kyrgios, who was on his best behavior in a battling five-set win.

Nadal, chasing a rare calendar Grand Slam, started his campaign at the All England Club slowly but is now in the groove as he hunts a third Wimbledon crown.

“I think I continued in a positive way until the end where I played a bad game,” said the Spanish second seed.

“In a personal way, for me to be able to be in the quarterfinals after three years (away from Wimbledon) it's amazing for me so very, very happy.”

Nadal broke his opponent five times in the match, capitalizing on his fourth match point to reach the Wimbledon quarters for the eighth time.

If the 22-time Grand Slam champion beats 11th seed Taylor Fritz and Kyrgios gets past Chile's Cristian Garin, they will meet in a mouthwatering semi-final on Friday.

Kyrgios looked to be in trouble when Nakashima broke for 4-3 in the fourth and took the set courtesy of a lazy Kyrgios service game.

But he rallied in the decider, passing the 100-ace mark for the tournament and breaking twice to secure the win.

The last time the 40th-ranked player reached the last eight at a major was at the Australian Open in 2015, a year after he reached the same stage on his debut at the All England Club.

But he is seen as a major threat to Nadal, whom he beat on his way to the quarter-finals in 2014.

The Australian, 27, said he was trying to stay "in the moment."

"I'm not thinking about lifting a trophy or making semi-finals or making the final," he said.

"I'm just thinking about my habits every day, just trying to put in a good performance on the court, then put in a good practice session, try to stay positive, try to really separate.

"You know, once I'm off the court, enjoy time with my team, my girlfriend, and just really enjoy that, then get into the game mode."

The unseeded Garin pulled off an astonishing comeback against Australia's Alex de Minaur, whom he had not beaten before.

The Chilean recovered from two sets down and saved two match points in the fifth set to beat the 19th seed in a grueling contest lasting four hours and 34 minutes.

America's Fritz, who beat Nadal in the Indian Wells final earlier this year, cruised past Australian qualifier Jason Kubler for the loss of just eight games.

Former world No. 1 Halep is looking increasingly dangerous as she makes stately progress toward a second Wimbledon crown in a draw now short of big names.

The Romanian's match against Badosa appeared tricky on paper but proved anything but, with the 16th seed coming through 6-1, 6-2.

Halep, yet to drop a set at Wimbledon this year, will face Anisimova of the United States for a place in the semifinals.

Earlier, Wimbledon chief executive Sally Bolton said tournament bosses had lodged an appeal against fines handed down by the WTA women's tour for bans on Russian and Belarusian players.

The All England Club imposed the sanctions in response to Russia's invasion of Ukraine and players were also prevented from playing in Wimbledon warm-up events.

Both the ATP men's tour and the WTA reacted to the Wimbledon ban by stripping the Grand Slam of ranking points.