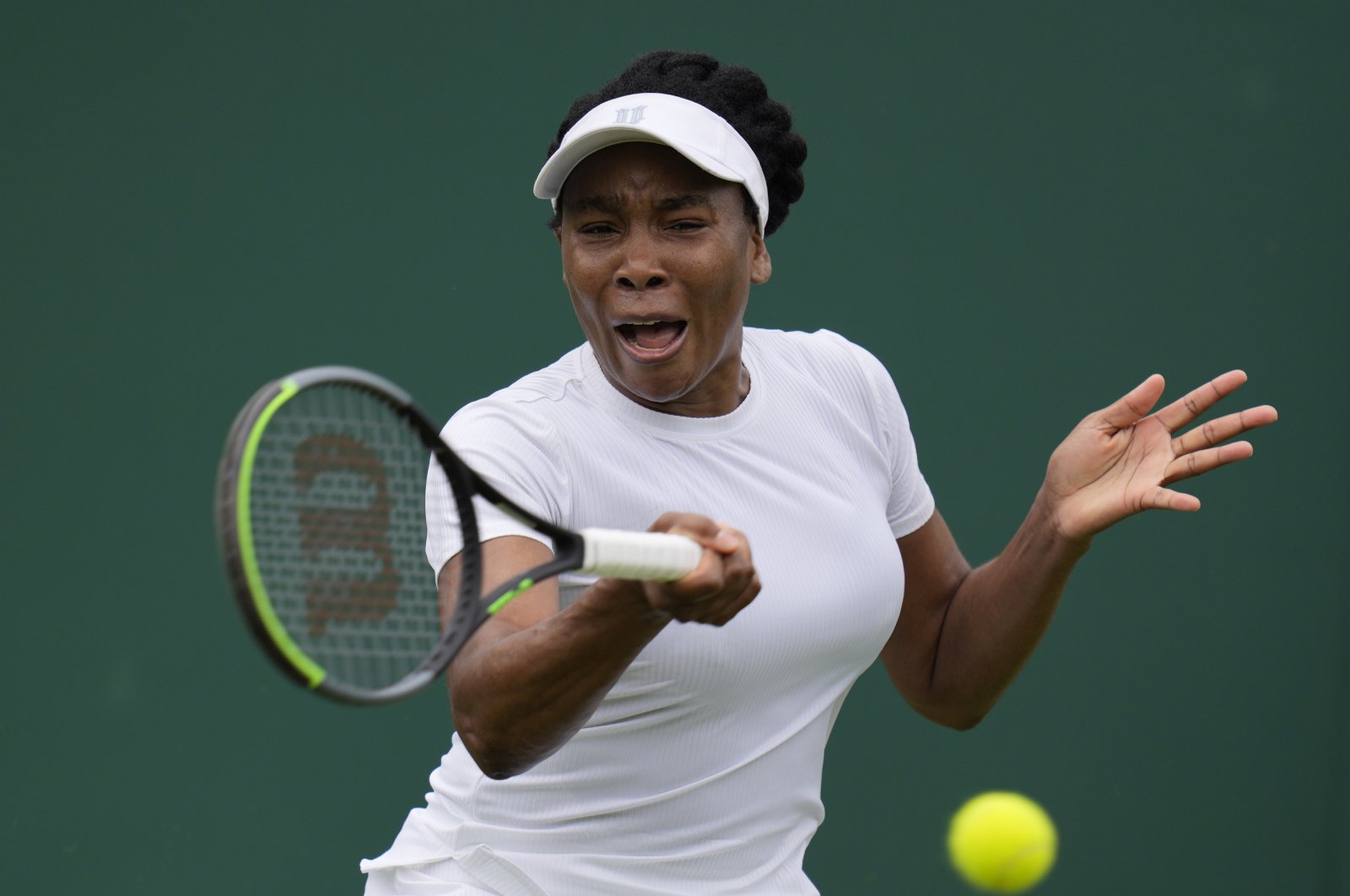 Venus Williams of the U.S. plays a return to Romania's Mihaela Buzarnescu during the women's singles first round match on day two of the Wimbledon Tennis Championships in London, June 29, 2021. (AP Photo)
by Associated Press
Jun 29, 2021 10:12 pm

Venus Williams accumulated 10 aces Tuesday by smacking serves at up to 114 miles per hour (mph) – not quite like the old days, but not too shabby, either.

She drove forehands to corners. She made her way to the net for crisp volleys. And when it was all over, the 41-year-old American celebrated her first Wimbledon match win since 2018 by raising her arms and yelling “Come on!” before reprising her familiar smile-and-twirl wave at No. 3 Court.

A five-time singles champion at the All England Club who is making her 23rd appearance here, Williams began her record-extending 90th Grand Slam tournament with her 90th career victory at Wimbledon, beating Mihaela Buzarnescu of Romania 7-5, 4-6, 6-3.

Williams is a former No. 1-ranked player who came into this week ranked 111th and having lost in the first or second round at the past eight majors. That included a first-round exit in 2019 at the All England Club against then-15-year-old Coco Gauff; now 17, Gauff defeated Fran Jones in straight sets Tuesday.

“You can’t win them all. Life is about how you handle challenges. Each point is a challenge on the court. No one gives you anything,” said Williams, who was diagnosed a decade ago with Sjogren’s syndrome, an autoimmune disease that can cause fatigue and joint pain. “I like to think I handle my challenges well.”

The schedule on Day 2 of the tournament, like on Day 1, was jumbled by rain. More than 20 matches were postponed until Wednesday and a dozen were suspended in progress shortly after Williams finished off a victory that lasted more than 2 1/2 hours.

Her sister Serena, a seven-time Wimbledon champ, was assured of playing later Tuesday because her match was on Centre Court, which has a retractable roof. Roger Federer, an eight-time winner, got through his contest there when his opponent, Adrian Mannarino, stopped playing after hurting his right leg when he slipped near the baseline late in the fourth set.

Federer was trailing two sets to one, but ahead 4-2 in the fourth when Mannarino fell. He tried to continue but dropped eight of nine points when they resumed and called it quits.

“Obviously," Federer acknowledged, "he was the better player."

No. 4 Alexander Zverev, No. 9 Diego Schwartzman, No. 10 Denis Shapovalov and No. 26 Fabio Fognini also advanced.

Buzarnescu is a 33-year-old left-hander who has dealt with a series of injuries and has gone from the top 20 to outside the top 150.

“Both of us, we are not young anymore. She’s got a few years in front of me,” Buzarnescu said about Williams. “Really a lot of respect for her to be still playing at this age. And I’m really happy that as long as she can compete at this level, that she will continue, because she's an example for (all) tennis players.”

Williams, who is entered in the mixed doubles competition with Nick Kyrgios, made her debut at Wimbledon in 1997. She won it for the first time in 2000 and most recently in 2008, the year she set the tournament women's record for the fastest serve, 129 mph.

On this day, with strips of black tape around her left knee, Williams with the help of her serve saved 13 of 15 break points, including a trio in the final game.

On the first, Buzarnescu tried a lob that the 6-foot-1 (1.85-meter) Williams reached and turned into an overhead winner. Buzarnescu flipped her racket end over end and caught it. The next break chance ended with a backhand passing shot into the net. On the third, a powerful forehand from Williams forced an error, and Buzarnescu put her hands on her hips.

Two points later, it ended. One of Williams' sisters stood and shot the scene with her cellphone. Her mother, Oracene Price, simply sat in the stands, head resting on her left hand.

Someone who was rather demonstrative about hoping Williams would win: No. 21 seed Ons Jabeur of Tunisia, who earlier this month became the first Arab woman to win a WTA title.

When Jabeur did a videoconference with reporters after winning her first-round match, Williams and Buzarnescu were beginning their last set. Whoever advanced would meet Jabeur, a 6-2, 6-1 winner against Rebecca Peterson.

“I’m praying for her to win right now. It’s such an honor, privilege, everything, to play Venus,” Jabeur said, smiling widely and holding up crossed fingers on both hands. “She’s a legend and such an inspiration for me. I've watched her so many times. I love the way she fights. Honestly, it would be my dream to play her.”

Jabeur said Williams “was kind enough to practice with me” recently and congratulated her for her barrier-breaking trophy.

“Such a nice person. ... Very happy and supportive,” Jabeur said. “I appreciate her a lot.”

Later, Williams returned the compliments, calling Jabeur “one of my favorite people on tour."

“Honestly, she’s just breaking down barriers,” Williams said. "The first woman from her country to do anything that she’s doing. ... She's inspiring so many people, including me.”