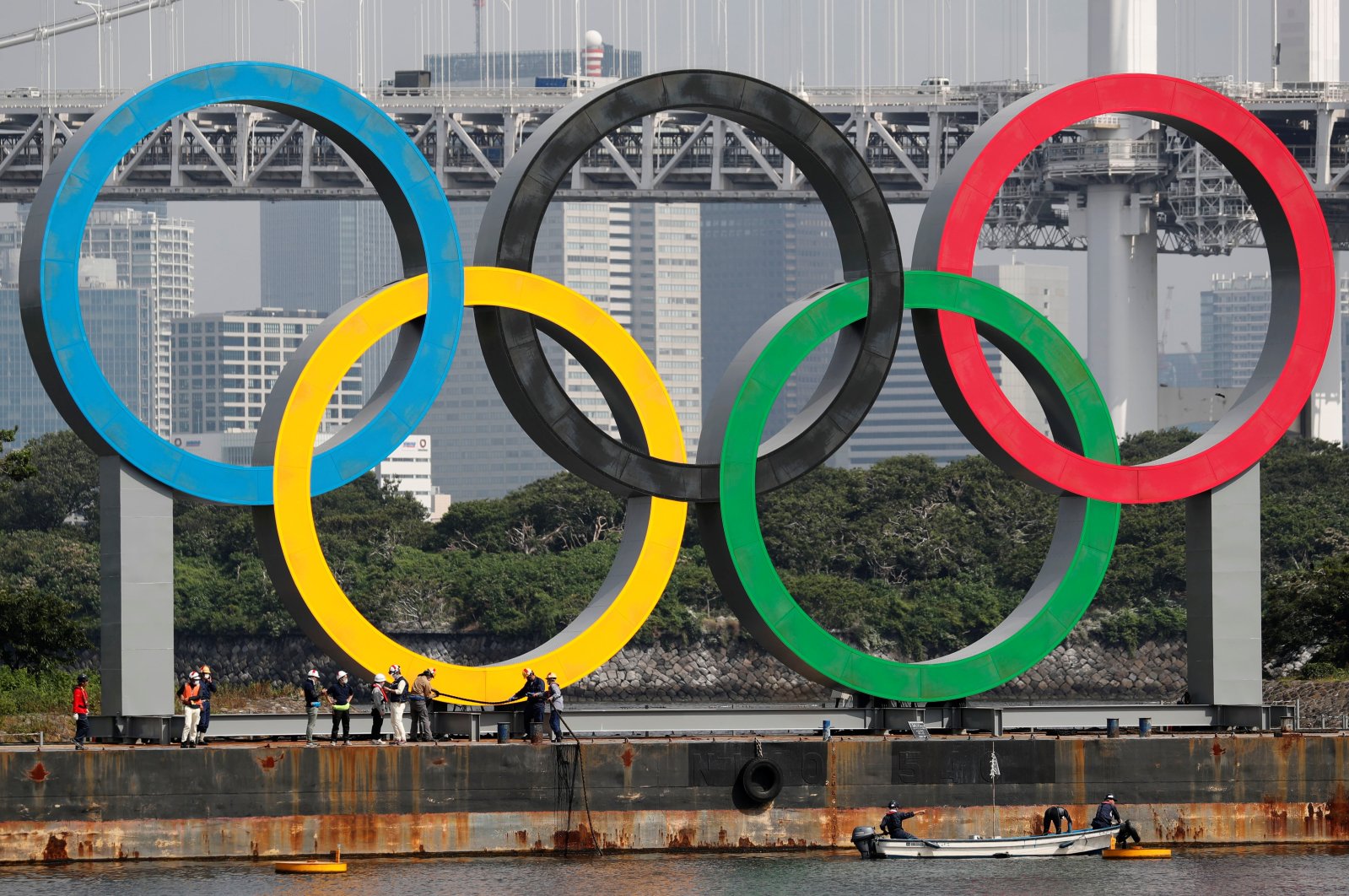 Workers prepare to carry the giant Olympic rings, which are being temporarily removed for maintenance, at the waterfront area at Odaiba Marine Park in Tokyo, Japan, Aug. 6, 2020. (Reuters Photo)
by Associated Press Sep 04, 2020 11:37 am

Despite claims by the IOC that costs are being cut, an in-depth study found that hosting the Games has become pricier with every iteration, and Tokyo 2020 has already become the most expensive in history

The Tokyo Olympics are already the most expensive Summer Games on record with costs set to go higher, a wide-ranging study from Britain's University of Oxford indicates.

The Tokyo cost overrun already exceeds 200%, lead author Bent Flyvbjerg explained in an interview with The Associated Press (AP). This is even before several billion more dollars are added on from the one-year delay from the COVID-19 pandemic.

Flyvbjerg is an economist at Oxford's Said Business School. His entire study is available and is set to be published on Sept. 15 in the journal “Environment and Planning A: Economy and Space." It's titled “Regression to the Tail: Why the Olympics Blow Up.”

Tokyo, postponed until July 23, 2021, is only a small part of the focus. The study – the third in a series following editions 2012 and 2016 – looks at Olympic costs since 1960 and finds they keep increasing despite claims by the International Olympic Committee (IOC) that costs are being cut.

Flyvbjerg cites many reasons for the rising costs and cost overruns, and offers solutions for the IOC. The vast majority of costs are picked up by governments with the IOC contributing only a small portion.

“The Olympics offer the highest level of risk a city can take on," Flyvbjerg told AP. "The trend cannot continue. No city will want to do this because it’s just too expensive, putting themselves into a debt that most cities cannot afford.”

In his paper, Flyvbjerg cites Los Angeles Mayor Eric Garcetti, whose city is to hold the 2028 Olympics following Paris in 2024.

“Most cities, unless you have a government that’s willing to go into debt or pay the subsidy of what this costs, most cities will never say ‘yes’ to the Olympics again unless they find the right model," he quotes Garcetti as saying.

Tracking Olympic costs is difficult, a dense maze of overlap and debate. Politicians and organizers always argue over what are – and what are not – Olympic expenses.

Flyvbjerg writes: “Unfortunately, Olympics officials and hosts often misinform about the costs and cost overruns of the Games. ... We therefore cannot count on organizers, the IOC, and governments to provide us with reliable information about the real costs, cost overruns, and cost risks of the Olympic Games."

Flyvbjerg looks only at costs to operate the games – the operating costs and capital costs – the cost to build sports venues. He leaves out a third category, which is usually many times larger: renovating roads, building airports, and what he calls “sprucing up projects,” which also fall to taxpayers.

He also excludes the cost of debt, and the future cost of running sports venues after the Olympics leave, and inflation.

According to the Oxford numbers. Tokyo's spending is at $15.84 billion, already surpassing the 2012 London Olympics, which were the most expensive summer games to date at $14.95 billion. He expects several billion more from the cost of the one-year delay.

Tokyo organizers say officially they are spending $12.6 billion. However, a national auditor says the actual costs are twice that high, made up of some expenses that the Oxford study omits because they are not constant between different Olympics.

“They (the IOC) obviously don't like our results, but it’s very difficult to counter a piece of rigorous research like this," Flyvbjerg said. "And they haven’t done that, and they can't do that. Our research is a problem for them.”

In an email to Associated Press, the IOC said it had not seen the latest Oxford study and declined to comment. It referenced another study by Mainz and Sorbonne universities.

This study also found Olympic cost overruns but said they were in line with other large-scale projects. Flyvbjerg's study finds they are not.

Flyvbjerg said he has been in touch on and off with the IOC and had sent a colleague to an IOC workshop. He said a major reason for the rising costs is that the IOC does not pay for them. He also cited rising security costs, and moving the games around the world. He calls this the “Eternal Beginner Syndrome” with new host cities starting basically from scratch.

He's said the IOC has tried recently to rein in costs, but the effort is “too little, too late.”

“They (the IOC) define the specs but don’t pay for them,” Flyvbjerg said. “This is pretty similar to you and I giving the specs for a house that we are going to live in, but we don’t have to pay for it. How do you think we’d spend? We’d gold-plate it. This is what has happened over time."

Flyvbjerg said he relishes a chance to sit and talk with IOC President Thomas Bach. He calls himself a fan of the Olympics.

"It's not that the IOC hasn’t been willing to talk, or I am not willing to talk," he said. “We certainly are. We have communicated in writing to keep the IOC informed. But yes, we would like to sit down with Thomas Bach.”