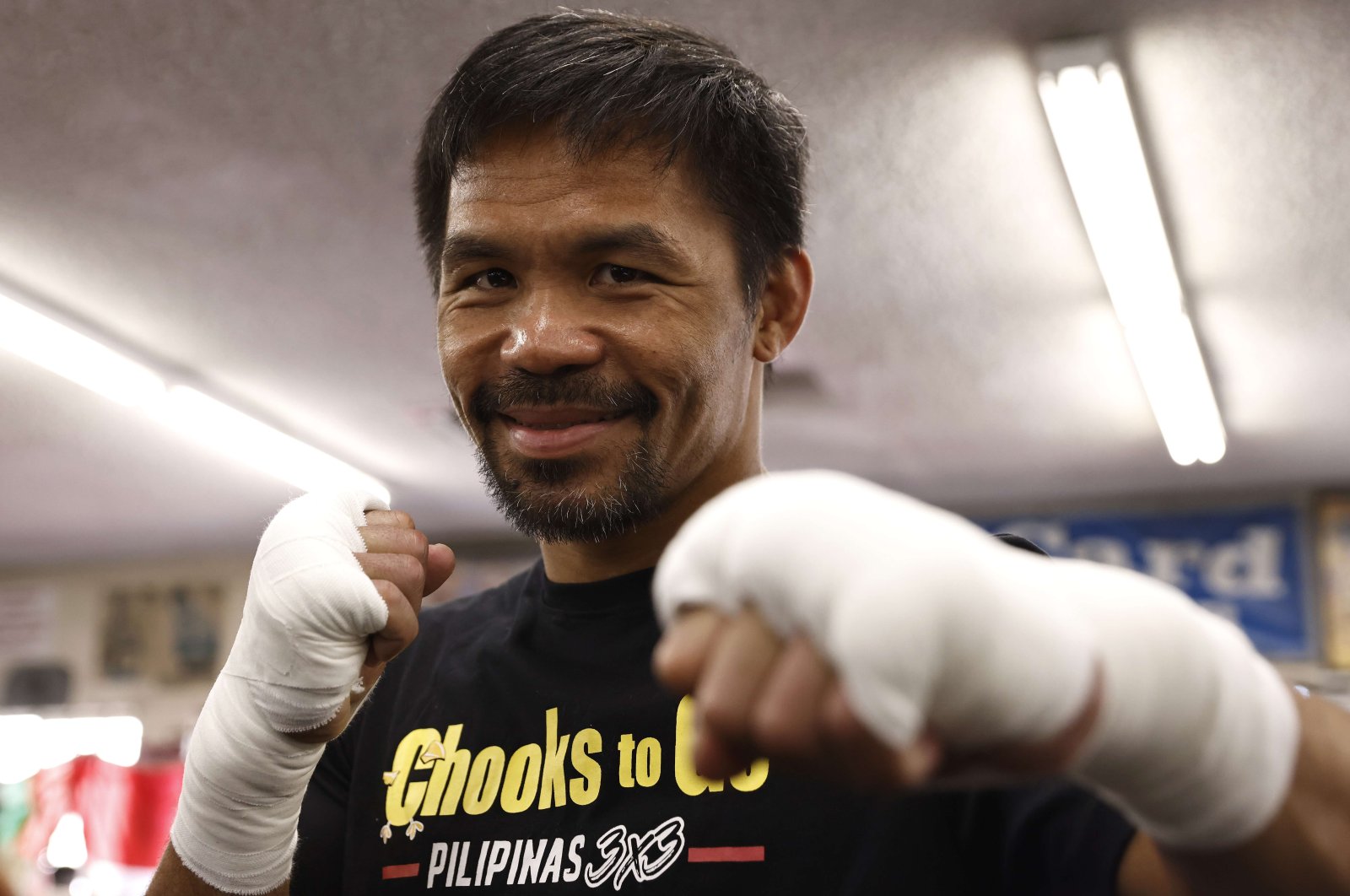 Filipino boxing icon Manny Pacquiao says he was ready to reclaim his world welterweight title on Saturday despite a two-year absence from the ring and a change of opponent.

Pacquiao faces WBA champion Yordenis Ugas at Las Vegas's T-Mobile Arena in a bout that was put together after his initial opponent, Errol Spence Jr., suffered an eye injury.

The abrupt withdrawal of Spence, the unbeaten IBF and WBC champion, has deprived the 42-year-old Pacquiao of another superfight at the tail-end of his glittering career.

It also means Pacquiao, who has not fought since beating Keith Thurman for the WBA title in July 2019, has had to recalibrate his training to account for the fact that he will now be taking on a right-handed opponent rather than a southpaw.

Pacquiao (62-7-2, 39 knockouts) played down the impact of the tactical readjustment as he prepares for the 72nd fight of a professional career that began in 1995.

"It only took me two days to adjust to fighting Ugas," Pacquiao said. "I have fought a lot of right-handed fighters before.

"It would have been harder switching from preparing for a right-hander to a southpaw. Most of my opponents have been right-handed, so there's nothing to worry about."

The hastily rearranged bout also gives Pacquiao a chance to settle a score.

Pacquiao was controversially stripped of his WBA title on grounds of "inactivity" earlier this year despite the global disruption to boxing caused by the pandemic.

The WBA instead handed the belt to Ugas, a fact that rankled Pacquiao.

"I didn't like that someone took my belt without challenging me in the ring," Pacquiao said. "Both of us are champions, but we'll see who has the belt after Saturday."

Pacquiao will start as a heavy favorite to reclaim the title in what could easily turn out to be his final fight.

While Pacquiao retains enough residue of the talent that made him the most thrilling fighter in boxing at his peak, Father Time remains an ever-present threat for a boxer into his 40s.

"I don't know if this is going to be my last (time in the ring), we are going to see fight by fight," said Pacquiao.

"I feel young right now. I enjoy training camp and I'm excited to sacrifice and be disciplined every day to prepare for a fight like this."

Pacquiao's long-time trainer, Freddie Roach, says there has been no sign of a drop-off in his protege's ferocious work ethic at their Los Angeles training base.

Pacquiao still attacks his grueling morning roadwork in the hills above the California metropolis, and in a recent workout at Roach's Wild Card gym, twice floored a sparring partner.

"We've had a good training camp and Manny has worked really hard for this fight," Roach said.

"Putting a sparring partner on the canvas was a motivation for all of us. We're going to bring that into this fight.

"His work ethic today is as good as it was 20 years go ... I'm expecting this fight to end in a knockout the way he has been looking."

In the opposite corner, meanwhile, Ugas is quietly plotting an ambush despite also having to readjust his training camp.

The 35-year-old Cuban (26-4, 12 knockouts) had initially been due to face Fabian Maidana on Saturday's undercard but agreed to step in to face Pacquiao after Spence's withdrawal.

"This has been a long road for me," Ugas said. "Obviously it is short notice that I learned I was fighting Pacquiao, but I'm thankful for the opportunity and I'm ready to take advantage of it.

"There are no excuses heading into this fight. I've been in this position taking a short-notice fight before, although obviously never against a fighter the caliber of Pacquiao.

"I'm certain that he cannot knock me out. I have prepared for 12 hard rounds. If this is Pacquiao's final fight, then he's going to be up against a guy who brought his best."