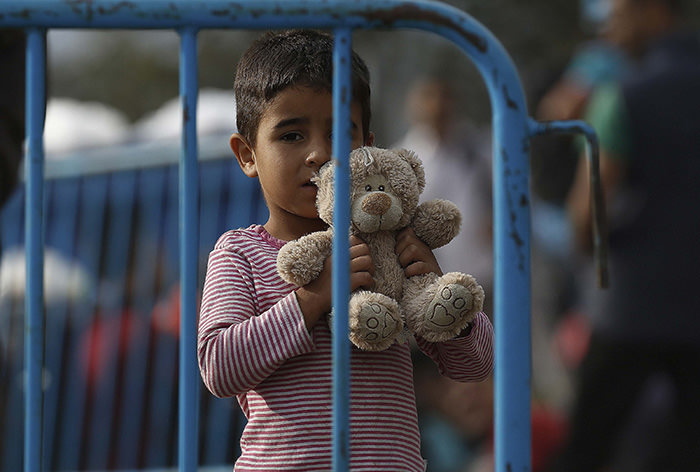 A Syrian refugee boy holds his teddy as he waits behind police barriers at Greece's border with Macedonia, near the Greek village of Idomeni, September 9, 2015 (Reuters Photo)
by Anadolu Agency Sep 09, 2015 12:00 am
Most vulnerable Syrian refugees do not even have an opportunity to flee to Europe although over 360,000 Syrian refugees in countries neighboring Syria have stopped receiving food assistance amid funding shortage, the U.N. warned.

World Food Programme spokesperson Bettina Leuscher told Anadolu Agency on Wednesday that "The most vulnerable Syrian refugees who are living in camps and communities did not even have an opportunity to flee to Europe due to multiple reasons including their financial situation."

Comparatively well-off Syrian refugees are paying around $4,000 for a place in safer ships to reach from the Mediterranean to Italy, from where they cross overland to central and northern European countries while middle class Syrian refugees first enter into Turkey and pass the Aegan Sea to reach Greece by spending less amount of money. On the other hand, the most vulnerable Syrian refugees do not even have these options.

As the food shortage in Syria and neighboring countries for Syrian refugees has been forcing Syrians flee to Europe, refugee agency UNHCR said in a statement on Wednesday that "The flow of refugees into Hungary at the Serbian border is unceasing. 2,700 arrived overnight on September 7-8."

"They are held just inside the border but must wait, sometimes days, to be registered so they can continue. It is difficult for people forced to camp in a field and their emotion can boil over," UNHCR said.

"Critical funding shortages have forced WFP to halve the level of assistance to almost 1.3 million vulnerable Syrian refugees in the region. With the value of food vouchers reduced, most refugees are now living on around 50 cents a day," the WFP said on Tuesday.

In September, 229,000 refugees in Jordan and more than 131,000 in Lebanon stopped receiving food assistance, WFP said.

WFP needs US$341 million (US$146 million for inside Syria and US$195 million in the region) to continue providing food for Syrians affected by the conflict until the end of 2015, WFP said.

"The Government of Turkey contributes US$5 for WFP food vouchers in the camps to bring the value of the voucher to a total of US$27 per person," WFP said.

"Due to a lack of resources, WFP was forced to withdraw assistance from 60,000 refugees in nine camps by end of 2014, but the government of Turkey has generously taken over assistance in those camps," it added.

Meanwhile, the U.N. refugee agency said at least 850,000 people are expected to cross the Mediterranean this year and in 2016, and more than half of the refugees who reached Europe this year are Syrians with 51 percent.

The Syria conflict began in early 2011 when the regime of President Bashar al-Assad responded with unexpected ferocity to popular protests that erupted as part of the Arab Spring uprisings.

More than four years of intense fighting has left the country divided between pro-Assad forces and a number of heavily armed opposition factions, which are often at odds among themselves.

Roughly half of the country's population has been displaced by the violence, with over four million Syrians now seeking refuge in neighboring countries, especially Turkey, Lebanon, Jordan and Iraq.
Last Update: Sep 17, 2015 12:21 pm
RELATED TOPICS