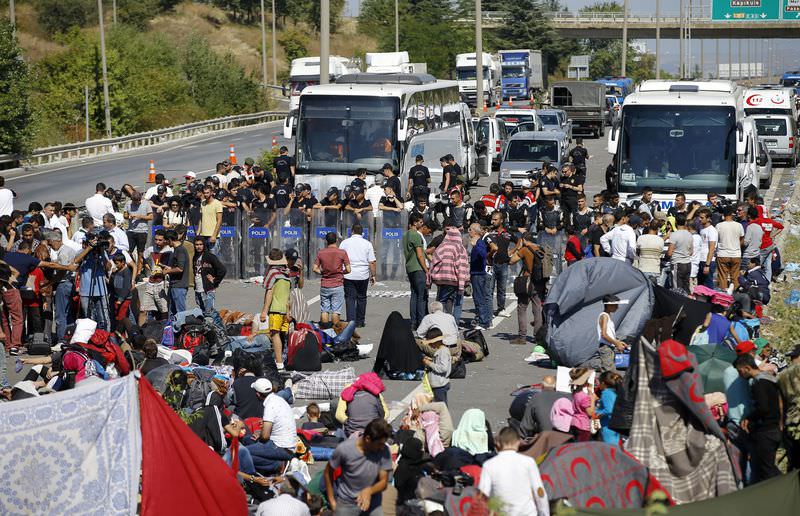 Hundreds of Syrian refugees who have been waiting at the border for days to cross into Greece have dispersed a day after their representatives met with Prime Minister Ahmet Davutoğlu, who said Turkey could not open its borders for the security of the migrants unless European countries granted access.

Davutoğlu previously said that Turkey would fly the refugees to wherever they wanted once the receiving countries agreed to accept them. During the meeting, he told the refugees' representatives that Turkey would gladly host them and care for all their needs as guests, but argued that it could not allow them to cross into Greece or Bulgaria because it feared for their safety if Europe did not legally allow them in.

Hundreds of mostly Syrian migrants who had been blocked for days by police in the northwestern city of Edirne while trying to reach the nearby Greek border have agreed to abandon their roadside protest.

A group of around 500 people, who had been engaged in a standoff with the police on the road leading into the city since Tuesday, lifted their makeshift camp Saturday night and left the area in buses provided by local authorities.

Some joined a larger group of around 1,500 migrants still waiting inside the city for the chance to continue their journey over land to Greece, a mere 10 kilometers away, or Bulgaria, which is about twice that distance.

Others took buses back to Istanbul, about 250 kilometers to the east.

At a meeting with a delegation of refugees Saturday evening Prime Minister Ahmet Davutoglu had appealed to the refugees to "end their protest by Monday," he wrote on Twitter.

"The voices of our Syrian brothers have been heard by the entire world. They must now return to a normal life," Davutoglu wrote, promising more aid to the more than 2 million Syrian refugees living in Turkey to prevent them from trying to illegally cross into Europe.

Prime Minister Davutoğlu met with the representatives of the Syrian refugees in Ankara Çankaya Palace on Saturday, calling on them to end their efforts to illegally cross the border, assuring them that he would be sending a letter to world leaders communicating their demands. "I will call on them to accept you. My request is for you to go back to your normal lives after making your demands heard by all through your protests."

At the meeting, Davutoğlu assured the representatives of the refugees that all their needs would be addressed, but argued that as long as no country officially opened their doors to them, Turkey could not allow them to cross the border. "We are ready to send people to countries who open their doors to them, but unfortunately no country has given a favorable response so far," said the prime minister.

Davutoğlu said he would be highlighting their plight at the United Nations General Assembly, which he is scheduled to visit to attend this year's opening of the session later this week. "We don't want Syrians to die in the Aegean Sea or on the roads," he told the representatives.

The refugees gathered in Edirne, including a large number of children, had been demanding to be allowed travel to Europe by land instead of risking their lives in overcrowded migrant boats in the Aegean Sea.