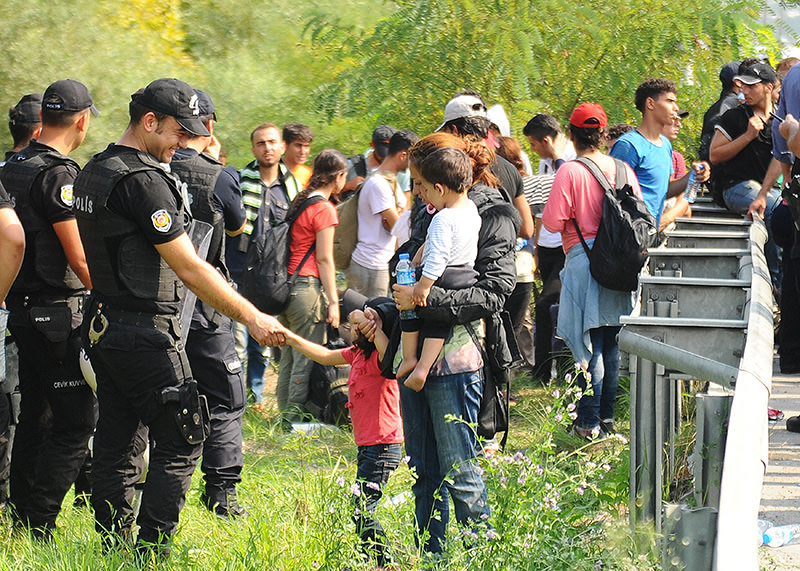 | AA Photo
by Anadolu Agency Sep 21, 2015 12:00 am
Turkish police dispersed on Monday Syrian refugees walking towards the northwestern Edirne province to attempt to cross into Greece, i.e. into Europe.

A group of 500 refugees, including women and children, was blocked by security forces while they were walking along the motorway near the Esenyurt district in Istanbul on Monday.

Some of them left the area and turned back to Istanbul after police warnings but around 50 others protested and then escaped using side roads.

For over a week, around 3,000 refugees have been waiting at Istanbul's main bus station, a large complex on the city's European side, asking for officials to let them go to Edirne.

Their arrival appears to have coincided with rumors on social media saying that Germany would accept thousands more refugees.

However, officials have not let them go to the border. Istanbul's governorship released a statement claiming that the "reports are groundless" last week.

Over 1,500 refugees have also been waiting in Edirne for over 10 days to cross the border.

Edirne governor Dursun Ali Şahin said that they could not let refugees go if countries (Greece and Bulgaria) did not accept to receive them.

According to an agreement made with representatives of Syrian refugees, they will be sent to whichever provinces of Turkey they want on Tuesday at the latest, Sahin said.

"These provinces will not be Edirne or Kırklareli - near the border," the governor added.

Millions of Syrian refugees have fled their country since war broke out more than four years ago. Nearly two million are hosted in Turkey, home to the world's largest Syrian refugee population.