At an ancient castle in Austria, villagers and refugees celebrate Eid al-Adha 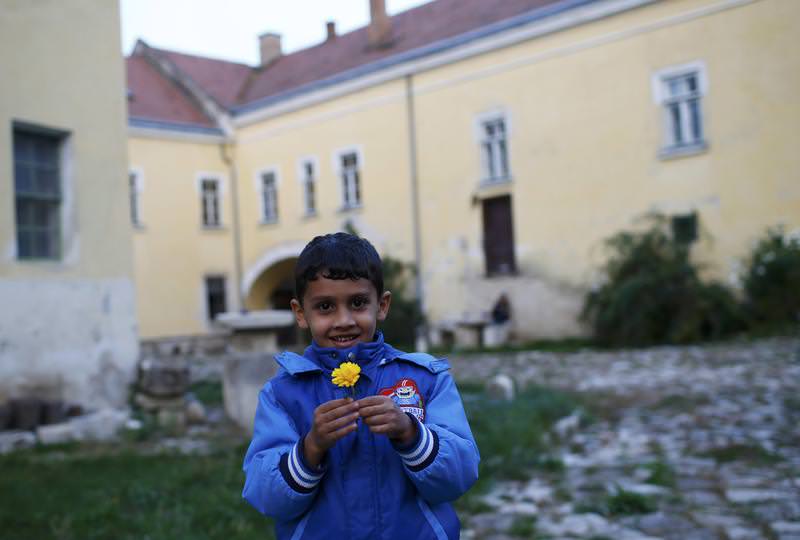 A young boy plays outside as refugees celebrate Eid al-Adha with Austrian villagers in the hall of Schloss Koenigshof, an ancient Habsburg castle in Bruckneudorf, Austria September 24, 2015. (REUTERS Photo)
by reuters Sep 24, 2015 12:00 am
Refugees and Austrians in the village of Bruckneudorf came together for Eid al-Adha on Thursday, in one of the least expected places for an Islamic celebration, an ancient castle in an Austrian village somewhere between Vienna and Hungary.

Tens of thousands of refugees have made their way from Syria, Iraq, Afghanistan and further afield in recent weeks, travelling up through the Balkan states and into Austria. Most want to go to Germany or Sweden as fast as possible. Others have decided they want to stay in Austria for good, and some of them are in Bruckneudorf.

"The Austrians are the kindest people," says Abir, a drawing teacher from the central Syrian town of Deir Az-Zour, who is sitting down to dinner with her 12-year-old daughter Rama and a crowed of fellow refugees.

"We knew that if Islamic State arrives in Deir Az-Zour, they will cut our throats. We had no food," Rama says. She is wearing a wooly hat made by a retiree in the village.

Their sumptuous Syrian dinner was prepared Abu Tayeb, a professional cook who, like her, fled his homeland. He hasn't heard from his family in the Syrian town of Deraa for six days.

Dinner is being served in the hall of a castle that once belonged to Karl the Great and the Habsburg Emperor Franz-Josef. Now it belongs to Sabine Schoeller-Lamberty, a 49-year-old woman who worked in advertising and real estate and did well enough to buy herself a 162-room castle, albeit one that needed some work.

Having fled death and destruction at home, the men, women and children from Syria and Iraq in the hall had first ended up in the asylum processing centre of Traiskirchen near Vienna. It was so overcrowded this summer that thousands of asylum seekers had to sleep in the open.

From Traiskirchen, they were bussed to Bruckneudorf. Schoeller-Lamberty had offered to house refugees in some of her rooms. After all, she had 162 of them.

The authorities initially turned her down. The castle needed too much work, they said. But as demand began to overwhelm supply, they changed their minds.

"In the dead of night around ten days ago, at around 2 a.m, a bus dropped off two dozen people with a pack of documents. Asylum requests," says Christian Hanel, local council in the community.

With the help of volunteers, Sabine installed electricity in the refugees' rooms. Now 24 of them refugees are living there as they seek asylum in Austria.

On Thursday, children run across the court yard with the new toys they were given for Eid al-Adha. Wearing a black Islamic dress and sipping a glass of white wine as they play is Schoeller-Lamberty

"They are my children and I will fight for them," she said.