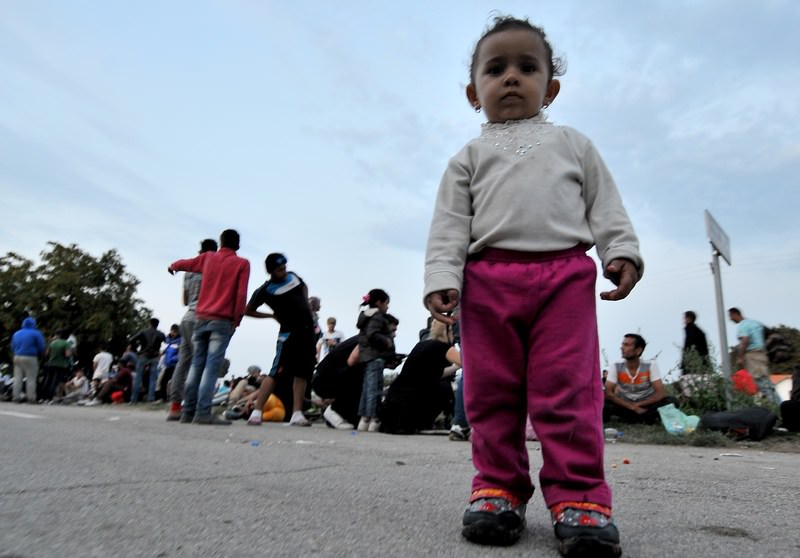 Refugees wait for a bus to be taken to the Croatian-Hungarian border in the Serbian-Croatian border village of Bapska, near a Croatian town on September 23, 2015. (AFP Photo)
by reuters Sep 24, 2015 12:00 am
European far right parties have called refugees streaming into the region "terrorists", a "ticking time bomb", a Muslim "invasion" that will bankrupt nations and undermine the continent's Christian roots.

For now, that has hardly helped their dreams of winning power in elections. In many countries they have found themselves out of step with a wave of public compassion for refugees, prompted by images like that of drowned toddler Aylan Kurdi, washed up on the shores of Bodrum in the southwestern Turkish coast in August.

But political experts say that as long as the crisis goes on, with no sign of a European consensus on how to stop it, the compassion may wear thin and far right parties could gain momentum.

The far right has had success in places: anti-immigration parties have risen in Italy and the Netherlands thanks to charismatic leaders. Hungary's governing Fidesz party, led by the raucous premier Viktor Orban, has moved sharply right, partly stealing the thunder of nationalists there. A Swedish rightwing party has benefited from a backlash over that country's status as Europe's most generous to refugees.

But across Europe as a whole, virulent rhetoric has lately done more harm than good for parties at the extreme of the political spectrum looking to expand.

"The refugee crisis has exacerbated reactions. We've seen both the best come out of people, with an unprecedented wave of solidarity from people wanting to help, and the worst with a big wave of people who have been ranting and raging with racist and xenophobic comments," said Francois Gemenne, migration expert at Sciences Po in Paris.

The biggest migration to Western Europe since World War Two has produced powerful images in recent weeks, which have provoked both sides of the debate over whether Europe should be more open or closed.

The far right points to daily scenes of migrants pushing against police lines, cramming through windows to board trains or creating long traffic jams as they walk down motorways.

"Masses of young men in their twenties with beards singing 'Allahu Akbar' (God is greatest) across Europe; it's an invasion that threatens our prosperity, our security, our culture and identity," Geert Wilders, a Dutchman and one of the most prominent far-right politicians, said earlier this month.

In Hungary, Orban has emerged as one of the continent's most vociferous opponents of mass immigration, saying the continent is being "overrun" and its Christian culture in jeopardy. That has helped his centre right Fidesz party avoid being outflanked by Jobbik, a party on the far right.

Hungary has become the main overland route into the EU's Schengen zone of border-free travel for hundreds of thousands of migrants who first arrive in Greece and then trek across the Balkan peninsula, bound for richer countries like Germany.

Orban's government has responded by building a fence to shut the border and giving the army permission to use non-lethal force to defend it.


However, some countries have escaped a surge in the far right altogether.

Greece, despite being the main entry point for migrants by sea, has seen its debt crisis eclipse all other political issues. Leftist Prime Minister Alexis Tsipras was elected to a second term on Sunday, while far right party Golden Dawn has been stuck on the fringes at around 7 percent of the vote.

In Ireland, criticising migration is taboo due to that country's own history of emigration. Spain is preoccupied by an independence movement in its Catalonia region and the rise of anti-establishment parties on the left and in the centre.

In Norway, the Progress Party scored its worst election result in two decades precisely due to its anti-immigrant stance. Support for the Finns party in Finland dwindled after it joined the government and had to compromise on its programme.

Bjarke Moller, director of Copenhagen-based Think Tank Europa, said an agreement struck earlier this week by European leaders to share out 120,000 refugees among nations shows they have not been "taken hostage" by the far right. But they still need to find a unified solution.

"If the EU does not, there is a risk that more extremist nationalistic forces will try to create a Europe defined by barbed wire, national walls, border control and protectionism," said Moller expressing his deep concern about the outcomes of the refugee crisis.