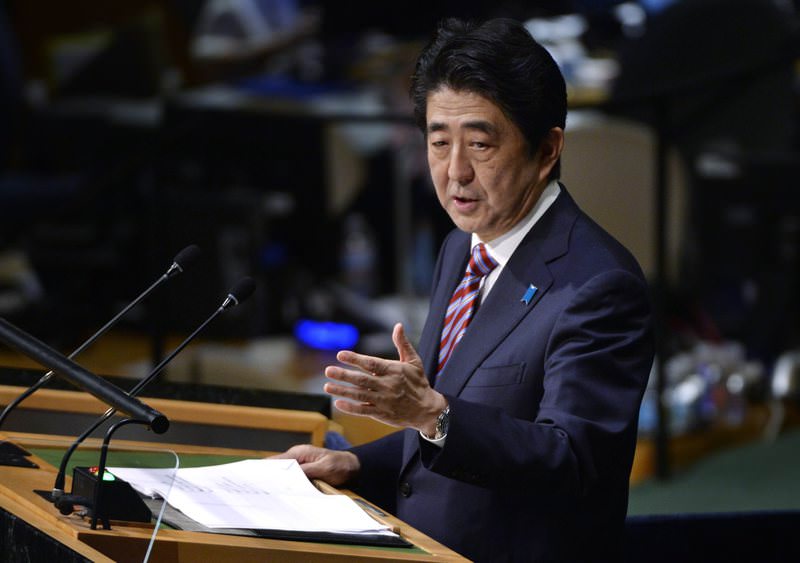 Shinzo Abe, the Prime Minister of Japan, delivers his address during the 70th session General Debate of the U.N.G.A., 29 September 2015. (EPA Photo)
by reuters Sep 29, 2015 12:00 am
Japan's prime minister said on Tuesday that his country would provide $1.56 billion to assist Syrians and Iraqis displaced by conflict and for building peace across the Middle East and Africa.

Shinzo Abe told the United Nations General Assembly that Japan would boost its assistance for refugees and internally displaced people from Syria and Iraq this year to about $810 million, three times the amount provided last year.

He added that Japan would also provide about $750 million for efforts to build peace across the Middle East and Africa.

In addition to that aid, Japan will spend $2 million in new assistance measures to Lebanon and $2.5 million in humanitarian assistance for countries adjacent to the European Union dealing with an influx of migrants, including Serbia and the Former Yugoslav Republic of Macedonia.

"I wish to look squarely at the fact that behind the refugees we find a much larger number of people who are unable even to flee and become refugees," Abe said.

Japanese officials have said that the $810 million of refugee assistance would be channeled through the U.N. refugee agency and the U.N. Development Agency. They said the peace-building assistance would include vocational training for former soldiers and funds for rebuilding.