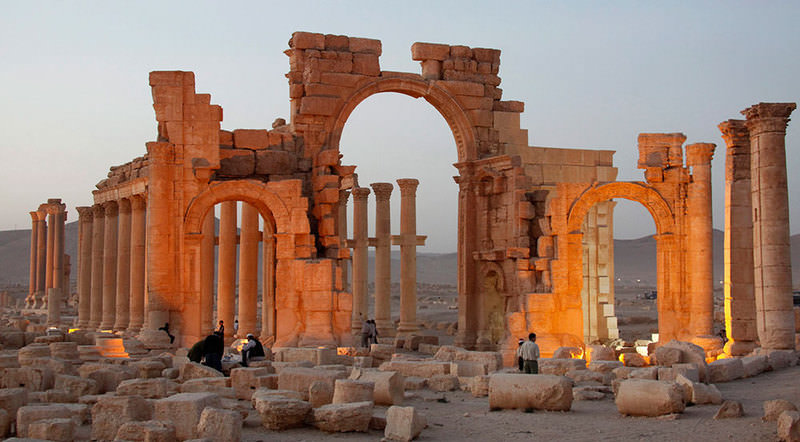 by Daily Sabah Oct 05, 2015 12:00 am
The ISIS terrorist group reportedly destroyed another historical monument on Sunday in the ancient city of Palmyra in Syria's central-western Homs province, according to a local activist.

"The group blew up the upper part of Palmyra's Arch of Triumph, destroying the arch and damaging the pillars on which it stood," the activist, speaking anonymously, told Anadolu Agency.

Palmyra, a UNESCO World Heritage site, has seen several of its monuments demolished by ISIS since the extremist group wrested control of the ancient city from Syrian regime forces in May.

ISIS drew international condemnation this summer when it destroyed the ancient temples of Baalshamin and Bel, along with a number of ancient tombs.

Syria's devastating civil conflict, now in its fifth year, has left some 250,000 people dead and millions displaced, according to UN figures.

The conflict, which has left the country divided between several competing heavily-armed factions, has served as a breeding ground for ISIS, which currently controls significant portions of both Syria and Iraq.

Last week saw Russia increasing its military presence in Syria with combat troops and staging airstrikes on moderate opposition groups, despite stating it targets ISIS and extremist groups in rhetoric.