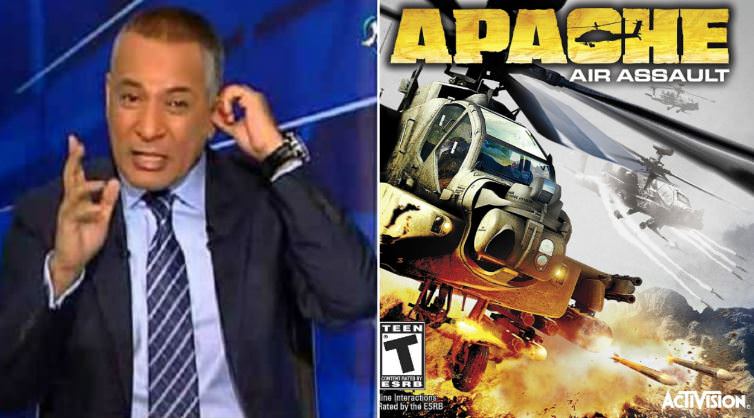 by Anadolu Agency
Oct 12, 2015 12:00 am
An Egyptian television host has confused a video game for the ongoing Russian airstrikes in Syria, triggering a storm of mockery on social media websites.

Ahmed Moussa, the host for Egyptian Sada el-Balad channel, on Sunday aired footage to show what he described as the success of Russian airstrikes against ISIS in Syria.

After the video, Moussa hailed the effectiveness and precision of the Russian airstrikes against militants in war-ravaged Syria.

"Have you seen how the [Russian] strikes are precise," Moussa said, adding: "The Russians are wiping them out, while they are running like sheep," using the word to describe the militants.

The fact, however, was that the video aired by the host was from "Apache: Air Assault", a combat flight simulator video-game released in November 2010.

Moussa did not notice the fact that the pilot in the video was speaking fluent English with an American accent.

"This is the difference between a force fighting terrorism and another defending, funding and arming [terrorists]," the host said in reference to Americans during his show.

Moscow launched a massive aerial campaign on Sept. 30 against what it says are positions in Syria held by ISIS.

The host, however, found himself in a storm of mockery over the video.

"It's the first time for me to know that the Russians are speaking English and saying fantastic," Sir Fawzi tweeted.

"The problem is not he brought a video game to show the Russian airstrikes against ISIS. The problem is that his crew did not remove the name of the game from the video," Mostafa ElKhouly said.

"If I have money, I would launch a TV channel to focus on the scandals of Egyptian media," another Twitter user, Abdullah Elshrif, said.

Moussa is a staunch supporter of President Abdel-Fattah al-Sisi, a former army chief who ousted elected president Mohamed Morsi in 2013.