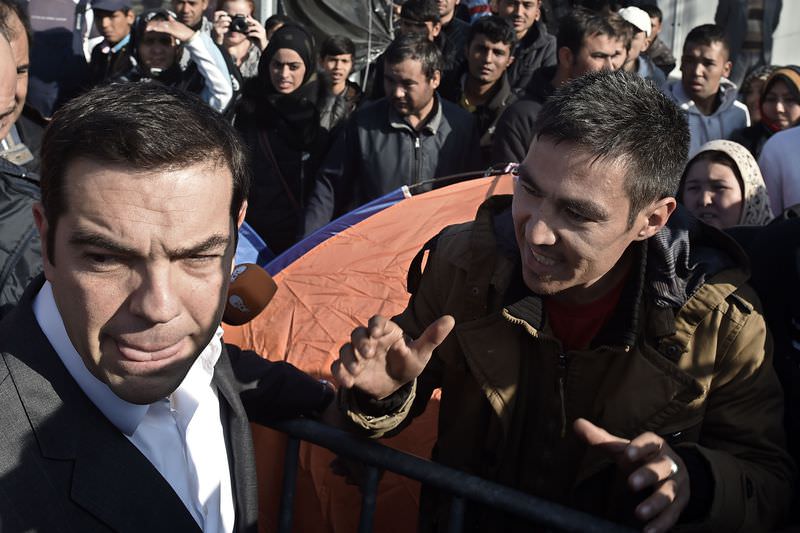 by Daily Sabah with Reuters
Nov 05, 2015 12:00 am
Greece's prime minister Alexis Tsipras said on Thursday that the country was unable to cope with the thousands of refugees arriving daily on its shores during his visit to Lesbos the Greek island where frustrated refugees protested Europe's inability to handle the crisis.

"I think we are battling something which is beyond our abilities, and everyone should understand that," he said, on a visit to a packed refugee registration centre with Martin Schulz, head of the European Parliament.

However, the prime minister and Schulz got a taste of some of the frustration at Moria, an army camp converted into a refugee center, in which thousands of refugees were forced to sleep in the open as numbers on the island reach crisis point.

The visit was also marked by protests against Europe's policies on refugees, with one group going into the town hall and hanging a banner, claiming "The Aegean is full of migrant corpses, Europeans murderers of peoples".

"We are here three days. We are hungry. I have two children, my children are sick," one man shouted at Tsipras.

Tsipras patted his arm. "We will do our best."

Cash-strapped Greece has been struggling to handle an influx of hundreds of thousands of migrants fleeing from war and hardship in the Middle East. Aid organisations estimate more than 601,000 have entered Europe through Greece this year.

With at least 430 people having died this year trying to make the short sea crossing along Greece's border with Turkey.

About 15,000 refugees were effectively stranded on Lesbos on Thursday because a ferry strike had stopped reception centres forwarding arrivals onto the Greek mainland.

"It's an asphyxiating situation," Tsipras said.

International aid agency IRC, which has a unit on Lesbos, said conditions at one main centre were unacceptable and that Greece had struggled for years to cope with far fewer migrants.

The United Nations refugee agency UNHCR launched a new funding appeal on Thursday, saying it needed $96.15 million in additional support for Greece and affected Balkan countries. Greece has had 5.9 million euros (4.19 million pound) in EU aid so far this year.

UNHCR forecasts up to 5,000 arrivals per day from Turkey between now and February. With a recent bout of bad weather, people smugglers have started offering discounts on journeys with flimsy inflatables and charging more for trips on boats.

"We were unfortunate enough to see an improvised dinghy as we were heading in, full of refugees," Tsipras said. "It's criminal."